Scientific integrity has been a focus of the 2018 conversation around the intersection of science and policy. While research integrity has historically focused on the ethics of research design, scientific integrity in the Canadian context also aims to protect accountability after the research has been done. The Office of the Science Advisor defines scientific integrity as “the condition resulting from adherence to concepts of transparency, openness, high quality work, avoidance of conflict of interest and ensuring high standards of impartiality and research ethics”.

During the last decade, this became particularly important for scientists working in government agencies who had to balance scientific impartiality and the government’s policies. These lines began to blur during the Conservative government (2006â€“2015), when several high-profile scientists (such as Kristi Miller from Fisheries and Oceans Canada) spoke out about government “muzzling”. The Professional Institute of the Public Service of Canada (PIPSC), the Canadian union that represents 60,000 government scientists and professionals including Miller, released survey data in its 2013 report, The Big Chill, showing that “90% of federal scientists could not speak freely [about their work]” and “74% felt sharing of science findings [was] too restrictive”. 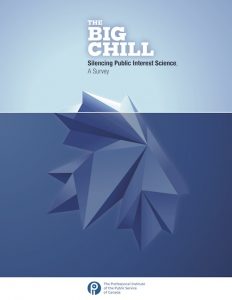 The Big Chill, a report by the PIPSC, detailed the sentiments surrounding transparency by federal scientists.

The claims prompted the Office of the Information Commissioner of Canada to launch an investigation. Unfortunately, the report was not published until five years later, but it validated many of the circulating suspicions. The agencies named in the investigation included the Canadian Food Inspection Agency, the Department of National Defence, Environment and Climate Change Canada, Fisheries and Oceans Canada, Natural Resources Canada and the National Research Council of Canada. For all but the Department of National Defence, the agencies were found to have communications and media relations policies that were in line with the Access to Information Act. The problem was that these policies were not being applied, producing an outcome “consistent with the ‘chill’ documented in the [PIPSC] survey”.

In 2015, the Liberal campaign directly addressed these concerns with a promise to “ensure that government science is fully available to the public, that scientists are able to speak freely about their work, and that scientific analyses are considered when the government makes decisions”. After the Liberals were elected and Dr. Mona Nemer was appointed Chief Science Advisor in 2017, new agreements with the PIPSC were struck to put these promises into writing. On July 30, 2018, Dr. Nemer’s office released a model scientific integrity policy to be adopted by federal agencies. Key parts of the policy include Section 4 (detailing the objectives to promote scientific integrity in all aspects of research), Section 6 (a breakdown of what scientific integrity means) and Section 7 (the requirements needed to ensure “openness, transparency and timeliness”). 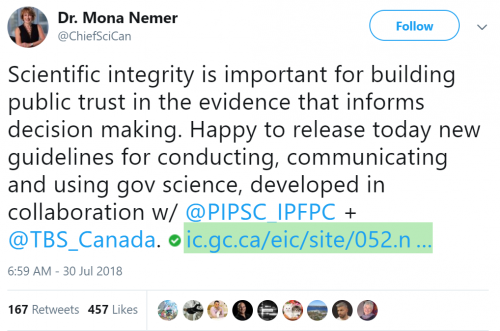 A tweet from Dr. Mona Nemer, Canada’s Chief Science Advisor, on the release of the model scientific integrity policy.

The deadline to implement a version of the model policy is December 31, 2018. Here is a summary of how the five agencies identified in the Information Commissioner’s report are implementing scientific integrity for themselves. 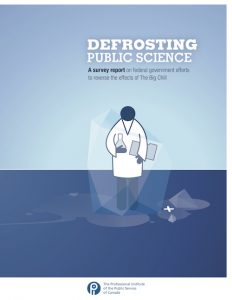 Defrosting Public Science: A survey report on federal government efforts to reverse the effects of The Big Chill

While none of these agencies have developed and adopted a concrete plan that documents their commitment to scientific integrity, there are indications that there’s already been a shift in the culture. Reports by the PIPSC in early 2017 show that 53 per cent of federal scientists now say that they still cannot speak freely about their work, down from 90 per cent in 2013, and 47 per cent feel that the sharing of science findings with the public has become less restricted since October 2015.

With continued improvements such as these, the only “chill” Canadians should feel is the one brought on by winter.