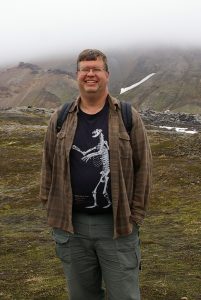 Stephen Heard is a professor of environmental ecology at the University of New Brunswick, although you may know him as Steve, the author of the science blog Scientist Sees Squirrel, which is this year’s winner for the Science Borealis and Science Writers and Communicators of Canada (SWCC) People’s Choice Award for Canada’s Favourite Science Blog. With close to four years of weekly blogging, Scientist Sees Squirrel has posts on a variety of topics, from statistics and the etymology of scientific Latin names, to science publishing. I admire Steve’s engaging style, honesty about his experiences, and the dedicated research in his articles. I spoke with him about how his blog and his research career intersect, as well as delving into the process behind managing a blog.

Connie Tang: The name of your blog, Scientist Sees Squirrel, seems to be a play on short attention spans. Where did it come from?

Stephen Heard: The name of the blog comes from my own varied interests, and it’s really about my own short attention span. As a scientist, my research focus has shifted a lot over my career â€“ I’ve completed a lot of side projects and my CV isn’t very coherent. That’s what I was thinking when I named the blog. My attention wanders.

Some of your posts date back to January 2015. Let’s rewind to the beginning, how did you start blogging almost four years ago?

Like most of my big decisions in life, it was very poorly thought through. I had been reading some blogs and I thought it would be interesting to do it myself. I don’t know what I was expecting other than I had something fun to write a post about. It sucked me in.

How do you try to appeal to an audience in this era of constant noise and limited attention spans?

It’s interesting. If you read articles online about how to build a blog audience, they all tell you that you’re supposed to keep to a focused topic. There are very few readers who would find all my posts interesting, so I hope people are willing to skip [what doesn’t interest them] and come back next week and see if the new article interests them.

Speaking of interests, I wanted to talk about your background as an evolutionary ecologist. I enjoyed reading your article comparing science fiction to nature. How does ecology influence your blogging?

I’m an evolutionary ecologist, and it certainly flavours my blog. I draw lots of examples and inspiration from it, but I don’t think of myself strictly as an ecologist blogger. It’s a lens of how to view problems, not a niche topic. I like connections and complex systems, and there’s nothing much more connected and complex than the natural system that is Earth. 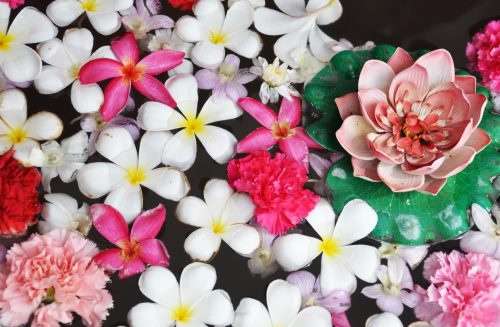 Image of white and red petaled flowers, inspired by the Scientist Sees Squirrel post, Why on Earth are flowers beautiful? Credit: Alex Block CC BY 2.0

I never intended for the blog to be related to work. When I started, I was determined that it was a hobby I did during my downtime, and it wouldn’t take away from what I think is my “actual job.” I think about it differently now. For one thing, my blog posts are read way more widely than my papers are. I had a post about an introvert going to conferences, and a lot of people have told me that they find that post so helpful â€“ to know that they go to conferences with the same worries I do.

Can you speak more on the impact of your blog on your career, if any?

It’s surprisingly contributed to my academic research career. I have a paper that’s in review now that grew directly out of a blog post that was a thought experiment on why most studied populations should decline. Some of the readers contacted me and suggested that we do some work together, [resulting in a] paper with literature reviews and data analysis.

I also coauthored another paper on measuring reach and impact of science community blogs. These papers would never have happened without my blogging, and it’s allowed me to forge connections with readers all over the world at different institutions with different perspectives.

I don’t think my [research] papers read like blog posts, but writing blogs has changed the way I write papers. I write a little less formally, with more touches of style. I was taught never to do that as an undergrad. I think that [the change is] a good thing, but not everyone agrees. There’s an interesting bleed from the blogging into my other kinds of writing.

Image of population size decreasing over time from the Scientist Sees Squirrel post (Why most studied populations should decline) that led to a research paper.

That’s fascinating. Blogging can sometimes be controversial for those in an early-stage career pursuing academic positions at universities or other research institutes. What are your thoughts?

I’m old, so it didn’t make a difference to me in terms of tenure and promotions. Early career conventional wisdom is that blogging doesn’t help â€“ it might even hurt your application because chairs, deans, or tenure committees might see it as a frivolous activity. I personally haven’t had that experience. When I talk to people at conferences, they’re mostly intrigued and see the value in [blogging]. Perhaps the crowd that thinks blogging is frivolous is smaller than I thought it was. It might turn people off who don’t see value in a broader academic portfolio. The problem, of course, is in your early career, you’re guessing which attitude your committee might have. I would suggest chatting with people in your department and your chair first.

Diving into the process of writing and managing a weekly blog, how do you blog consistently?

I’m surprised that I’m still posting once a week or so after three years. I’ve written around 300 posts, and I’m amazed I have any ideas left. In terms of routine, I usually write when I’m unlikely to be productive with other things. I can’t do any actual science in the evening, so I write a blog post. Frequency of posting matters a lot in building and keeping an audience, so I want to post once a week. If I find that I don’t have enough posts queued, I will be more deliberate in taking time to write.

I have a big Word document that is just a list of ideas for blog posts. When an idea pops into my head, I scribble it down no matter where I am. I even have a waterproof tablet in my shower. I checked that document before this interview and I was completely gobsmacked. There’s 85 blog post ideas there. To be fair, of those 85, some of them are stupid. [When I’m first starting to write,] I’ll scan the list and choose one. The writing can take anywhere from half an hour to a few hours to get a draft. I have a folder with about eight half-written drafts. They ripen a bit and usually get finished eventually.

I’ll draft a completed post and put it aside for a few days. I can read it with a fresher mind and determine if I need to make any further changes before I copy it into the blogging software. Usually, I have two or three, sometimes four, posts that are scheduled in advance. I get itchy when I don’t have stuff [queued]. I don’t think my personality deals very well with flying by the seat of my pants. Even after I schedule the post, there may be a week before it goes live. The day before it goes live, I usually open it and give it one last read and tinker with it again. I know some bloggers who frequently will post the next morning and I think that’s amazing. 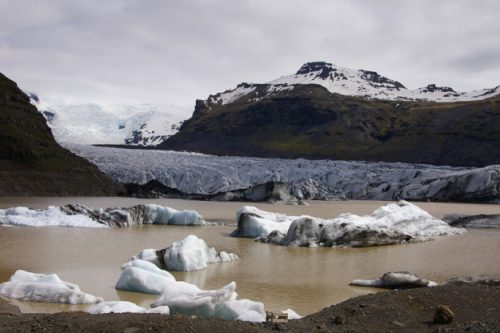 Image of SvÃ­nafellsjÃ¶kull glacial terminus, east of VÃ­k, Iceland, from Scientist Sees Squirrel post on Where the Earth shows its bones â€“ one of my favourite articles by Steve.

What makes a blog post one of your favourites, whether it be one of your own or from other bloggers?

Do you have any advice for fellow and aspiring scicomm bloggers?

You’ve got to start with your enthusiasm, because if you’re interested, that will probably bring people along. There are very [few barriers] to start[ing a blog post]; it’s easy to find and easy to read the first paragraph. You can afford to dip into a bunch of topics and see what grabs you [as both a writer and reader]. The alternative to blogging about my own interests would be to blog what I think others want to read, but I’m terrible at predicting that. For the paper, I wrote about the reach and impact of blogs â€“ we investigated audience growth. The data suggests that if you keep blogging, more people will read. Building an audience takes time, but they build.

For additional reading, I recommend reading this Nature feature on Why science blogging matters. Many thanks to Stephen Heard for taking part in the interview for this post. The interview has been edited for length and clarity.

This article is also published by Science Writers & Communicators of Canada, a partner in the 2018 People’s Choice Awards: Canada’s Favourite Science Blog.