The role of fire in forest ecosystems 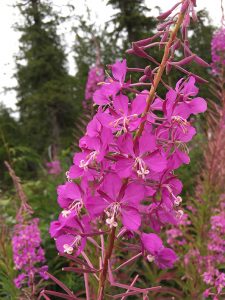 Fireweed, Epilobium angustifolium, is one of the first plants to establish itself in newly burned areas of the boreal forest. Photo: Alina C. Fisher

Forest fires are powerful and devastating. But they are also necessary for the rejuvenation of some ecosystems.

Many plants are well-adapted to fire; some trees have dense bark or shed lower limbs to help them survive fire while other plants need fire to initiate seed germination. Animals such as deer move away from burned areas and into suitable surrounding habitat, while other species like fire beetles, nighthawks, woodpeckers and bears move into recently burnt areas.

Thanks to climate change, fires are expected to be more severe and burn larger areas, and the fire season will be longer with more ignitions by mid-century. This is bad news for species that aren’t well-adapted to fire because they will find it increasingly difficult to survive. 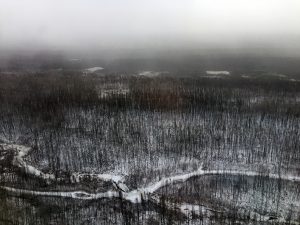 The extent of the 2016 forest fire in northern Alberta, near Fort McMurray. Photo: Jason T. Fisher, used with permission

The role of fire management 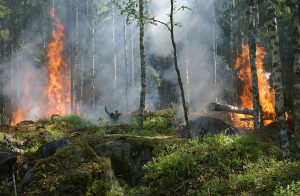 Humans are also affected by forest fires, particularly those living in or near forested areas or who use forests for recreational activities. One important thing to consider is the effect our fire management activities have on the response of a forest to fire. Natural Resources Canada describes fire management as the process of planning, preventing and fighting fires to protect people, property, and the forest resource, using a broad toolkit including the Canadian Wildland Fire Information System, the Canadian Forest Fire Danger Rating System, the Wildfire Threat Rating System, the Canadian Fire Effects Model, and the Probabilistic Fire Analysis System. It also involves using fire to attain forestry, wildlife, and land-use objectives. For example, forest managers may use prescribed burning to eliminate built-up fuel loads in forested areas, improve wildlife habitat, or meet other resource management objectives. These planned and controlled burns are a versatile management tool, often used to reduce the risk of large, uncontrollable fires. However, many people are still resistant to controlled burns because public safety campaigns instill the idea that all fires are bad. Years of fire suppression by humans have caused the accumulation of significant amounts of woody debris – prime fuel for fire. 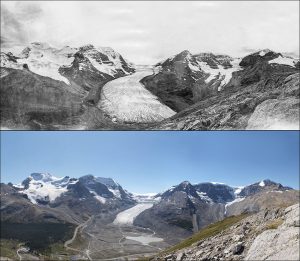 In Canada, fire occurrence is somewhat random. However, we are seeing an overall increase in the frequency, duration, and intensity of forest fires in Canada, the U.S., and around the world. Climate change is expected to change the water availability regionally with some areas becoming more prone to drought, which will put them at risk for more severe burns. Science Borealis blogger Dr. Sarah Boon has previously written about the effects of drought on fires in northern Alberta. Although fires can be attributed, in part, to “people in the wrong places” and even the crafty behaviour of some birds like the “firehawks” in Australia, one of the biggest influences on fire is human-induced climate change (see the 2008 IPCC A5 report for more info).

The changes we are seeing with global warming go far beyond any short-term weather trends – look at the extreme melting of glaciers and the polar ice shelves in just the last century – and are affecting humans as well as wildlife. While occasional fires can benefit forests, climate change is making fires more frequent and more intense – so much so that some forest species are unable to recover from them. As some species are more sensitive than others, the increase in fire intensity is actually changing the compositions of both plant and animal communities.

Impacts of fire on wildlife species

The large fuel load that results from fire suppression practices, coupled with climate-change-induced drought, means that fires may burn hotter and longer than many forest species can tolerate. Under these circumstances, plant species that typically require fire for regeneration can be overburned, effectively sterilizing the forest floor seedbank instead of stimulating it to grow. We’re starting to see these impacts as forests are recovering more slowly, and species are recovering differently. Extreme fires can pose a risk not only to human health and wellbeing, but also to wildlife. It’s not just a matter of avoiding fire – a deer can run away from a fire while a salamander cannot – but also the loss of critical habitat, whether it be nesting sites for owls or food for caribou. For example, the already endangered caribou – especially subspecies like the woodland caribou – may be in trouble if the lichen they depend on for food can’t recover quickly enough after fire. The effects on other species at risk (especially those with long migrations, or those that aren’t mobile), may be severe as fires continue to burn hotter and longer, living up to climate change projections. 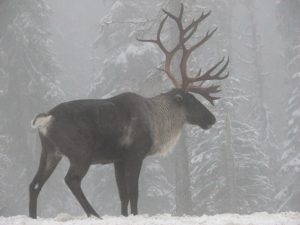 What can we do?

The combination of climate change and frequent fires means that affected forests may never grow back, causing other problems, such as flooding, that remain long after the fires are out. In the short term, we can permit more controlled burns in key areas to help decrease the severity of fires when they do occur. And although humans are not going to stop expanding into new areas and fires are not going away, UBC Professor Dr. Lori Daniels points out that homeowners can take steps to minimize and mitigate the effects of fires even if they don’t live in fire risk zones by following the recommendations of FireSmart Canada. These include maintaining a minimum distance of 10 m between a building and untreated fuels (e.g., vegetation); removing ground-level fuels, litter, and downed trees to prevent fuel accumulation; and planting less fire-prone species of vegetation if it is ecologically viable. Ultimately, though, action to mitigate climate change itself is required to decrease the impacts and risks of fire to Canadian forests. So, if you want to help, consider decreasing your carbon footprint as well.

2 thoughts on “Climate change, fire, and their implications for species”