I was 18 weeks pregnant when I received the following call from my gynecologist:

Doctor: Hi, Rana. How are you feeling today? Do you still have a fever?

I had elevated liver enzyme levels and a two-week-old low-grade fever. My doctors were trying to find out why.

Me: Hi Doctor. I’m feeling much better. Fortunately, the fever is gone.

Doctor: OK. Good. So, we got some results back, and they are a bit concerning.

Doctor: It seems that you have caught CMV. Do you know what that is?

Doctor: Okay. You will need to come and see me so we can talk about it.

After I hung up, I immediately Googled “CMV.” It was the first time I learned about this virus.

Cytomegalovirus, or CMV, is a common herpesvirus spread through blood, saliva, urine, tears, mother’s milk, vaginal fluids or semen. Most CMV infections go unnoticed because those infected are asymptomatic. About 40 to 100 per cent of the world’s population test positive for CMV, with a higher percentage in developing countries. The virus remains in your body for life. For most healthy people, CMV does not pose a health risk because it remains dormant.

However, congenital CMV (cCMV), which occurs when the virus is passed from a woman to her fetus, is very dangerous and can seriously affect the unborn child. The consequences of cCMV are wide-ranging. Some babies do not present any manifestations of the infection, while others suffer permanent disabilities such as vision impairment, intellectual disability, and hearing loss. Some full-term babies may not survive it.

Congenital CMV is the most common congenital viral infection worldwide. It is the leading cause of non-genetic sensorineural hearing loss and the second-leading cause of intellectual disability after Down Syndrome. One in 200 Canadian babies become infected with CMV during pregnancy; one-in-five of those babies will have a permanent disability.

When I found out I was pregnant, I knew there were some golden rules I must follow to protect my baby, such as no longer drinking alcohol and taking prenatal vitamins. I had also seen the many informative pamphlets on how to have a healthy pregnancy at the clinic, but none of them were about CMV, and no one ever warned me about it. It turns out that I was not alone in my ignorance. A 2016 study about the awareness of CMV among pregnant women in Montreal showed that 415 of 505 women (85%) were unaware of CMV.

Cytomegalovirus is preventable. But that means that the public needs educating about how to protect itself. I wish I had seen a poster or a brochure explaining how to prevent getting infected, like the one below:

Extract from an infographic produced by CMV Canada. Used with permission

Speaking of prevention, the American biotechnology and pharmaceutical company Moderna is on its way to developing a CMV mRNA-1647 vaccine. The phase 2 data of the clinical testing is promising and the pivotal phase 3 study of at least 8,000 participants will begin in 2021.

Today, the typical treatment for cCMV symptomatic newborn babies is the antiviral drug Valganciclovir. The treatment, which significantly improves hearing and cognitive outcomes, should be started within the first month of a baby’s life.

Most babies born with cCMV are asymptomatic at birth. About 15 per cent of these babies will develop hearing loss during the period that is critical for language development. This can lead to language delays that are difficult for the child to make up. Therefore, detecting cCMV and intervening in the early stages is crucial to a child’s development. Providing early hearing aids or cochlear implants and speech and language therapy helps affected children get the same speech, language, and developmental outcomes as their hearing peers. Furthermore, other interventions like physiotherapy, mobility aids, and vision aids are often needed. Again, the sooner the intervention is made, the better the outcome. 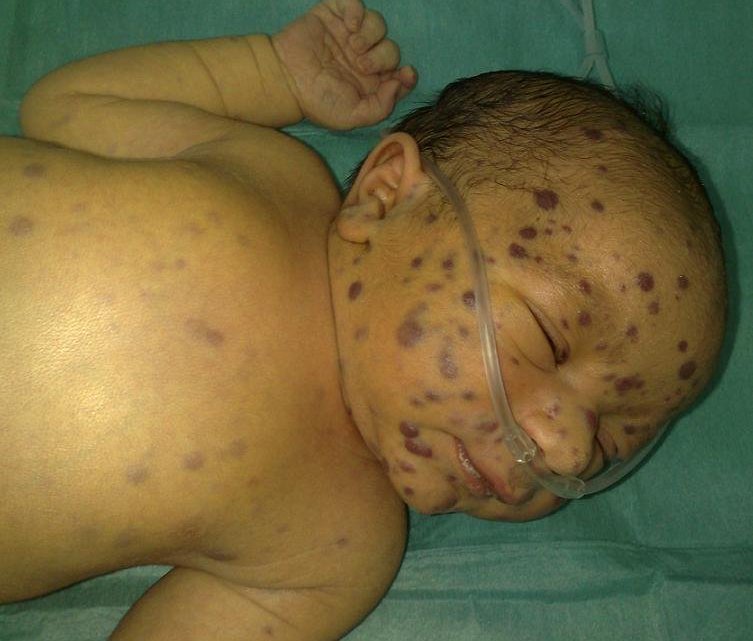 This baby was born with a “blueberry muffin” rash, an indication of the CMV. Most newborn babies are asymptomatic and appear healthy at birth, making it difficult to identify a CMV infection without screening. Photo by Sarra Benmiloud, Ghizlane Elhaddou, Zoubida Alaoui Belghiti, Moustapha Hida, Abdelhak Bouharrou, Wikimeda Commons, CC-BY 2.0

To identify these at-risk children, universal newborn cCMV screening should be implemented. In Canada, every province takes a different approach to screening. Only three of the 10 Canadian provinces screen for cCMV: British Columbia, Manitoba and Ontario. British Columbia and Manitoba have targeted screening protocols in place. In November 2020, a universal cCMV screening bill was introduced in Manitoba’s legislature, which will make universal CMV screening obligatory in the province. The bill is not yet law.

In July 2019, Ontario became the first province to have a universal cCMV screening program in place. Kayla McNally, the executive director of the Canadian CMV Foundation, describes what the program accomplished in its first year:

McNally recalls the story of Francesca Jones: “She was the very first baby who was identified with cCMV during the pilot phase of this screening program. She was born with profound hearing loss, but because we caught the infection early, we were able to treat her and put interventions in place right away. She became one of the youngest patients to ever receive a cochlear implant. Today, she is doing exceptionally well, exceeding expectations, and having full conversations with her parents.”

Both the statistics and personal stories such as this one demonstrate the importance of universal screening. 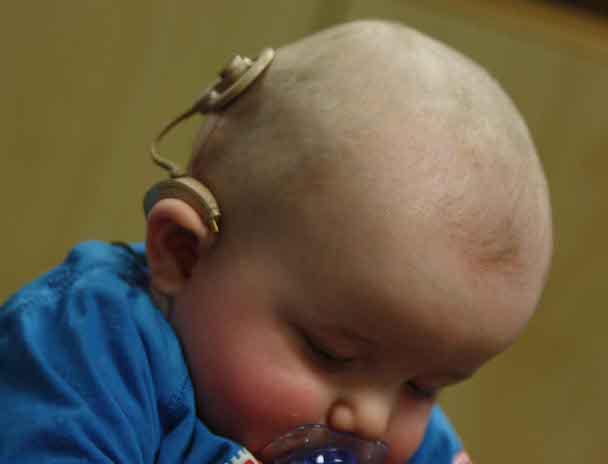 Congenital CMV can damage a newborn’s hearing. Providing babies affected by cCMV with early hearing aids or cochlear implants and speech and language therapy can help them achieve the same speech, language, and developmental outcomes as their hearing peers. Photo by Bjorn Knetsch, Wikimeda Commons, CC-BY 2.0

When I asked McNally how we can all help in the fight against cCMV, she said: “Let’s start by talking about it, to our friends, sisters, and daughters, let’s raise awareness.” She also encourages every Canadian outside Ontario to write to their local MLA and let them know it’s time to screen for CMV.

“CMV Canada has letter templates that we would be happy to share,” she added. She also suggests that people who would like to help contact CMV Canada to become a volunteer.

As a woman who caught CMV while pregnant, I want to raise awareness and fight for universal screening. No pregnant woman should catch the virus because she didn’t know about it, and no baby should have to pay the price.

For those of you who stuck around to find out how my story ends: after further testing, I received another call from my gynecologist telling me that I hadn’t transmitted the virus to my baby. However, 11 days later, I lost my baby due to an unrelated reason.