On dark Alberta nights, far away from the man-made glare of street lights and fluorescent-lit office buildings, you may come across a photographer camped out in an open field, waiting patiently with a camera on a tripod. And if you’re lucky — if the skies are clear and the timing is just right — you might even catch a glimpse of the bizarre formations that illuminate the skies over Canada, an experience that many spend their lifetimes chasing. While a lone photographer may not conjure up the word scientist, the connection is closer than you might think. What are photographic snapshots of the night sky if not scientific evidence that record what’s happening in nature?

The spectacular light show, known as Aurora borealis in the north and Aurora australis in the south, is sparked by the collision of gases in the Earth’s upper atmosphere with charged particles from the sun. Usually, protons and electrons in the solar wind are directed around the Earth by its magnetic field (magnetosphere). On occasion, these particles penetrate the magnetosphere at its weakest areas near the poles. These electrically charged particles collide with atmospheric gases like oxygen, nitrogen, and hydrogen, resulting in flashes of colourful light that appear to sway or dance across the night sky. Aurora chaser Song Despins describes the exhilarating moment of capturing the aurora: “I know the moment that I see the colours dancing in the sky, there is a good chance that I will never see those colours formed in that way again. The aurora is a dance that is not supposed to be seen a second time.”

Depending on the type of gases involved, the northern lights display an array of colours ranging from yellow to green to hues of pink and red. Oxygen is the source of the common green aurora and occurs at about 100 km above the Earth. At 300 km, collisions with oxygen can produce a rare all-red aurora. However, the spectacles that light up the far northern and southern regions are not always the auroras we think they are.

While on the hunt for the perfect photo of the Aurora borealis, a group of photographers called the Alberta Aurora Chasers discovered a mysterious purple and white ribbon of light in the night sky that astronomers had never seen before. Underneath the purple and white ribbon of light was a structure that resembled a green picket fence. The aurora chasers named the structure Steve, a reference to the 2006 animation film Over the Hedge. In the film, animals afraid of something unknown on the other side of a hedge choose to name it Steve. Chris Ratzlaff, a photographer with the Alberta Aurora Chasers, told the CBC, “It’s a completely meaningless name, which is really useful for things that aren’t understood.” 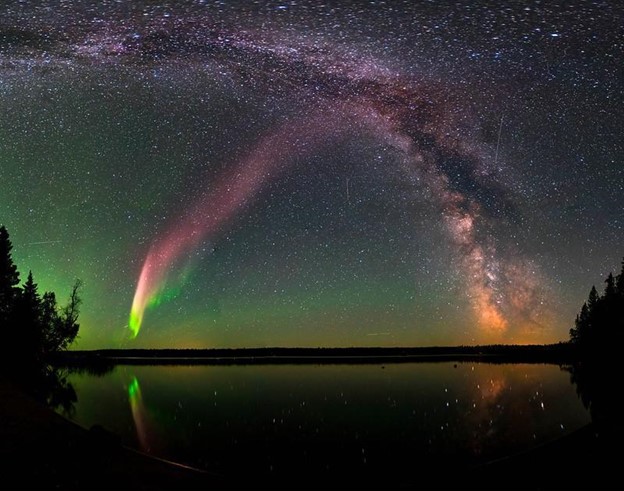 STEVE (Strong Thermal Emission Velocity Enhancement) and the Milky Way at Childs Lake, Manitoba, Canada. STEVE is the purple and white ribbon of light accompanied with green vertical lines of light (picket fence) seen at the left of the image. Composite image by Krista Trinder on flickr, Public Domain.

The aurora chasers don’t consider themselves scientists in the traditional sense of the word, but in 2018, they co-authored a scientific paper with Eric Donovan, a researcher in auroral physics at the University of Calgary. By 2020, photographers had uncovered yet another feature of STEVE that was critical in helping researchers at NASA chip away at better understanding the cause of this phenomenon. Scientists decided to keep the name Steve and turned it into the scientific acronym STEVE (Strong Thermal Emission Velocity Enhancement). Ironically, the strange light formation recorded by photographers and sky watchers for decades had never caught the attention of the scientific community.

Unlike the aurora, charged particles do not cause STEVE. Researchers analyzed images of a STEVE event that occurred a decade earlier over eastern Canada. They compared the images with satellite data that are used to detect charged particles raining down into Earth’s ionosphere. The study suggested that STEVE is caused by a completely different mechanism than the aurora and proposed that it belonged to a new optical phenomenon. They called it skyglow.

It’s not everyday that science identifies a new type of light in the sky, let alone one discovered by photographers and amateur sky watchers. According to NASA scientist Elizabeth MacDonald, “citizen scientists don’t get into the patterns that scientists get into. They do things differently. They are free to move the camera around and take whatever exposure they want.” STEVE research is at the very beginning of its journey and is just starting to construct a model that explains why the unique light exists.

STEVE isn’t the first time that observations made by the public have contributed to scientific research. Citizen science is a powerful way to collect data, especially when the science in question involves something as elusive as STEVE sightings. People fascinated with space are often referred to as backyard astronomers. To take advantage of the observations of backyard astronomers around the world, MacDonald started a citizen science project named Aurorosaurus, calling on photographers to help build a library of photos capturing aurora sightings. The photographic data aid in advancing our knowledge of these optical phenomena. Projects like Aurorasaurus create links between backyard astronomers and the scientific community, maximizing the potential for discovery.

STEVE remains a big question mark for scientists. For one thing, nobody knows how high it is even located. Scientists are working closely with auroral photographers to get an altitude measurement of STEVE. In an article reflecting on the unusual way in which the discovery was made, space physicists wrote “How we missed [STEVE] is a fair question to ask. It took the persistence and dedication of citizen scientists to notice, distinguish, and catalog STEVE and a dissemination of knowledge from citizen to professional scientists to bring it to the fore.” As more questions arise, and as scientists continue to look for answers, the contributions of citizen scientists will become essential in the quest for an explanation.

Feature image: The Aurora borealis, known as the northern lights, are common across Canada, Alaska, parts of Russia and northern Scandinavia. They are visible at night under clear, cloudless conditions. Photo by Kourtney Gundersen (CC0).