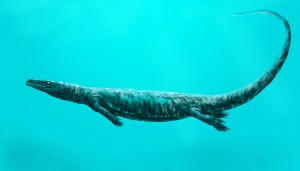 They’re huge and terrifying (well, some of them), legendary and mysterious, and are frequently endowed with great names that children love to rattle off: triceratops, mosasaur, velociraptor, T-Rex!

The whole idea that dinosaurs actually walked on, swam around, and flew over this earth is mind-boggling, no matter how steeped in science you might be.

Dinosaurs (and the science around them) have done what few scientific topics ever do â€“ successfully captured and held the public imagination for generations. Off the top of my head I’d say space exploration is the only real contender (but if you have some other nominations, drop them in the comments).

Scientists are certainly willing to suspend disbelief in the interest of enjoying a movie. (Screen capture, Jurassic World)

While it used to seem as though critiquing the science of a movie was an exercise in shouting into the void, today the popular press is more than happy to air the discussion and let the comment-battles commence.

And it’s great! The mere fact that there is conversation and argument around such scientific topics as feathered dinosaurs means people are interested. And the more people tune into the discussion â€“ no matter which side they pick in terms of critiquing movies â€“ the more they learn about the real science.

When it comes to dinosaurs, the Jurassic Park franchise has certainly done its part to ignite the conversation around scientific accuracy and the portrayal of science and scientists in movies.

From the first Jurassic Park, which many agree at least made a respectable attempt at portraying science as we knew it, to the most recent, Jurassic World, which everyone agrees dropped the ball, the widespread coverage has brought the newest discoveries in paleontology, genetics, and other scientific topics into the public conversation.

On that note, here’s a collection of recent posts by Science Borealis bloggers that cover dinosaurs (real and imagined), and how science and scientists are portrayed in film and fiction.

Now that I can show my work for #Dinohunt, here’s a look at Ankylosaurus magniventris for @VictoriaArbour ‘s b-day! pic.twitter.com/oivQbyOe5z

Did we really need to introduce our main female character with the camera sweeping up her legs to her face? Was that absolutely necessary? Also, could we just not use the ‘frigid, uptight workaholic woman needs to learn to loosen up and become sexually free with a man, and also needs to remember that all women will have children eventually’ stereotype? COULD WE JUST NOT?

“… an uptight park operations manager with barely any knowledge of the science behind what she is trying to manage, and a “dinosaur researcher” who turns out to be a marine that is hired to train raptors…with what credentials other than his military background I don’t even know. The only scientist that makes an appearance is Dr. Wu and he is disregarded by most of the other characters and by the end makes you want to slap him..”

Argo’s waste would have been quite massive, and contained large amounts of nitrogen, phosphorus and potassium, which would be recycled back into the environment. Additionally, grazers would have eaten seeds and then dispersed (read: pooped!) them out at new locations, encouraging new growth. It is when animals are left in one spot for too long that the damage associated with grazing occurs and ecosystem degradation results.

Have you ever wondered where dragon myths came from? Well, according to Stanford Scholar, Adrienne Mayor, who studies both folklore and fossils, it’s possible that there could be a correlation between fossils and dragons.

“… I think it’s important to highlight and remind people just how significant Canada is in understanding the history of the Earth and in palaeontology. We have numerous world famous fossil sites representing almost animals from the earliest existence up to the most recent fossils, from vertebrates to invertebrates to plants, and several very important sites from coast to coast.”

In the end, let’s be glad that Jurassic World – despite all its faults – was such a big hit. It again brought the most recent dinosaur discoveries and a healthy discussion of the realities around scientific research into the public conversation.

One thought on “Dinosaurs! What’s not to love?”