SNOLAB, Canada’s deep underground research laboratory, celebrated its 10th anniversary this year. Located two kilometres deep in a mine near Sudbury, Ontario, this facility hosts the world’s deepest, cleanest laboratory space. Over the past decade, SNOLAB has been at the forefront of astroparticle physics research and physicists anticipate an equally illustrious future. In this first installation of a two-part series, we explore what SNOLAB is, what it has accomplished, and what we can expect from it in the future.

SNOLAB at a Glance

The name “SNOLAB” refers to both a research facility and the scientific collaboration that works there. The facility has two main areas: its underground laboratory space and a surface-level area to support it. Best known for its work on dark matter detection and neutrinos, SNOLAB currently hosts 11 active experiments in areas ranging from genetics to the testing of scientific measurement equipment. The underground facilities are located in an active mine, which may seem like an odd choice. However, its unique location uses the natural shielding properties of the Earth’s crust. The roughly two kilometres of rock surrounding the laboratory significantly reduce the ambient cosmic rays and other radiation that would otherwise interfere with detectors. Despite being located in an active mine, the underground facility boasts 5000 m2 of clean room space, with air contaminants like dust filtered out to a maximum specified density to further reduce sources of interference with measurement equipment. Particle and radiation detectors are particularly sensitive to background-related noise.

SNOLAB was officially launched in 2012, although an experiment called SNO – Sudbury Neutrino Observatory – was already at that location. SNOLAB was built as an expansion of the experiment’s infrastructure and is currently host to SNO’s successor, SNO+.

Low background environments are environments where all the sources of signal noise external to the experiment, like dust, cosmic rays, and radiation, are minimized by shielding, air filtration, and other manipulations of the experimental environment. This research focus topic therefore stems directly from the facility’s unique design and location. What better place to study such environments than the deepest, cleanest lab in the world? While all SNOLAB experiments take advantage of the facility’s built-in low background in some way, the REPAIR experiment, currently in progress, was designed specifically to do so. A team of biologists set up shop in the underground facility to study how living in a low background environment affects organisms. 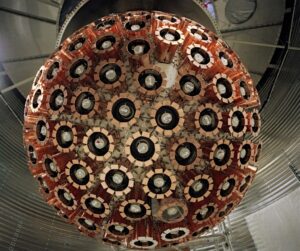 Dark matter, SNOLAB’s second focus topic, is one of physics’ biggest mysteries today. Simply put, there is a lot more “stuff” in the universe than we can detect and account for. The matter that we can’t detect is referred to as dark matter. Why do we call it dark? Because we can’t see it! It doesn’t seem to interact with photons and the electromagnetic force (what we call light), which makes it difficult to detect with traditional experimental physics setups. There are many hypotheses concerning dark matter’s nature, but so far, physicists have only been able to rule out a few. SNOLAB has produced some of the strongest experimental data surrounding what dark matter is – and isn’t – and has acted as a key player in the search for dark matter since the lab’s inception. Today, more than half of SNOLAB’s ongoing experiments are dedicated to solving this century-old mystery, including the colossal DEAP-3600 collaboration. Its most recent ground-breaking results conclusively showed that dark matter does not exist within a previously unprobed range of masses, which narrows the range in which physicists need to search for it. More on this in part two.

As for the collaboration’s third focus topic, Art McDonald’s work on solar neutrinos – small, almost massless particles coming from the sun – is perhaps the best-known science to come from the SNO/SNOLAB infrastructure, since it won him the 2015 Nobel Prize! Neutrinos are still a significant area of research at SNOLAB. SNO+ has continued to give physicists key insights into neutrinos, such as placing a better limit on invisible nucleon decay. Nucleons – the particles that make up the atom’s nucleus – include protons and neutrons. Currently, it is believed that protons don’t decay into other particles outside the nucleus and that neutrons can only decay in one way. Invisible decay modes are hypothetical ways in which nucleons could decay that would be very difficult to detect. The existence of invisible decay modes would be a strong indicator that there is physics beyond what we understand now, that could change how we think about and organize subatomic particles. The SNO+ result has ruled out invisible decay modes in a specific energy range, bringing physicists closer to either detecting or ruling out these decay modes.

The last of SNOLAB’s focus topics, diverse inquiry, casts a wide net, allowing scientists to pursue questions across many fields. From deep seismic studies – or the underground analysis of earthquakes – to biology and equipment testing, if it needs to be done deep underground or in a very shielded location, SNOLAB is the place to do it. For example, the PUPS seismic experiment was able to show important ways in which the propagation of earthquake vibrations is different on the surface and deep underground. This information could help increase safety in mining practices, among other applications. 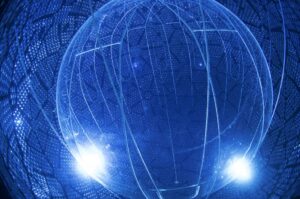 This image of the SNO+ detector was taken by one of the experiment’s underwater cameras. Image by SNOLAB, approved media image.

In May of this year, the SNO+ experiment finished upgrading its apparatus, which significantly increased the detector’s sensitivity and allowed the team to start a new phase of data collection. These changes will let SNO+ measure the Canadian Shield’s geoneutrinos – neutrinos originating from radioactive decay on Earth – for the very first time.

With its world-class detectors and unique location, physicists expect SNOLAB to provide continued insight into the nature of dark matter in the coming years. A new experiment using the SNO+ neutrino detector to continue the search for dark matter has been suggested, although no plans have been announced yet. Last year, SNOLAB unveiled their Strategic Development Plan for 2023-2029, so it’s safe to say that there are many exciting things in store.

SNOLAB has carved out an influential place for itself in both Canadian and worldwide physics in its 10 years of operation. By continuing and expanding the legacy of SNO, the collaboration has greatly contributed to astroparticle physics and beyond. In part two, we will explore the science involved in some of SNOLAB’s active experiments.

Editor’s note: This post is the first of a 2-part series by Eloise Chakour about SNOLASB. To read Part 2, click here.