Editor’s note: this post is the second in a two-part series by Eloise Chakour on Sudbury’s SNOLAB. Check out Part 1 here.

SNOLAB’s facilities in Sudbury, Ont. include the world’s deepest, cleanest lab. Researchers at SNOLAB do world-class science, including many experiments searching for dark matter and neutrinos. We will explore two dark matter experiments – the Dark matter Experiment using Argon Pulse-shaped discrimination (DEAP-3600) and PICO – and the neutrino experiment SNO+. 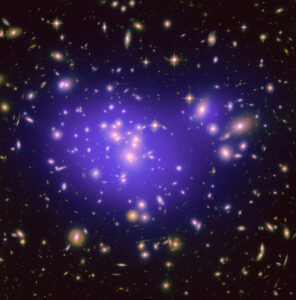 The galaxy cluster Abell 1689 is located in the constellation Virgo. An image of it was created using visible and infrared data from the Hubble Space Telescope. The purple region overlaid on the image is a simulation of the distribution of dark matter needed to create the required gravity to keep this galaxy cluster rotating as observed. Image: NASA, ESA, E. Jullo (JPL/LAM), P. Natarajan (Yale) and J-P. Kneib (LAM), CC3.0.

Dark matter is one of physics’ biggest mysteries, but the foundational idea is quite simple. Throughout the 20th century, astronomers and astrophysicists noticed inconsistencies in how galaxies and clusters of galaxies behave. More specifically, they determined there wasn’t enough matter in the universe to create the required gravity to keep galaxies rotating as observed. Since they couldn’t see or measure what accounted for their observations, the physicists named the mysterious substance dark matter. Detecting and describing dark matter is the holy grail of modern astrophysics.

There are many hypotheses about the nature of dark matter, ranging from new kinds of particles to different flavours of familiar particles, to tiny black holes. Some physicists have even theorized that dark matter isn’t really matter at all! Instead, the effect we attribute to dark matter is simply gravity acting in a way we don’t yet understand.

One of the more popular hypotheses revolves around Weakly Interacting Massive Particles, a category of particles referred to by the delightful name WIMPs. The DEAP-3600 and PICO experiments at SNOLAB are on the hunt for WIMPs, but have yet to detect any. While some researchers take this lack of detection as a sign that WIMPs don’t exist, many physicists believe they may be detected soon. Why? The key indicator is in the name: they are weakly interacting. This means that these particles do not interface with other particles very much, making them difficult for physicists to measure.

The DEAP-3600 and PICO experiments work on very different principles, but they are both looking for the same WIMP interaction: a collision with an atom’s nucleus. Physicists think that when a WIMP collides with a nucleus, energy is dissipated and can be measured.

DEAP-3600 uses a massive apparatus, comprised of an inner spherical tank filled with 3600 kg of liquid argon surrounded by a detector case measuring 8 m in diameter, which looks for WIMP-argon interactions. These interactions excite an argon atom, which emits ultraviolet light when it returns to its previous, lower energy state. The detector measures this light.

PICO uses a modified bubble chamber, where small bubbles of a superheated fluid are suspended in another liquid. In the event of a WIMP interaction, the superheated bubble immediately turns into gas, which is measured by the detector.

Both DEAP-3600 and PICO make use of SNOLAB’s natural shielding, since non-WIMP interactions interfere with the measurements and make it difficult to tell whether the signal is caused by a WIMP or something else. Currently, neither experiment has detected any WIMP candidates. However, DEAP-3600 has ruled out the detection of WIMPs in a specific mass range allowing physicists to refocus their experiments and adjust the equipment to ensure the highest probability of detecting WIMPs if they exist.

Searching for neutrinos: SNO and SNO+

Neutrinos are very light subatomic particles that have no electrical charge. They are key components in many particle physics interactions, but are difficult to detect because, like WIMPs, they are weakly interacting.

In this brief video, Dr. Kirsty Duffy explains the basics about neutrinos.

For many years, there was a discrepancy between the number of observed solar neutrinos – neutrinos coming from the sun – and the number that physicists expected to detect. Dubbed the Solar Neutrino Problem, this discrepancy remained a mystery until a team at the Sudbury Neutrino Observatory (SNO) published their ground-breaking results. SNO used an apparatus very similar to DEAP-3600: a large, spherical chamber of liquid surrounded by detectors used to observe the light that is created when neutrinos interact with electrons or nuclei in the chamber.

Arthur B. McDonald’s team at SNO determined why fewer neutrinos than expected were observed. Firstly, they showed that neutrinos have non-zero mass, contradicting widely held opinion. They detected three distinct flavours or types of neutrinos (electron, muon and tau) and determined that they differ, in part, by their mass. Secondly, they discovered that neutrinos could switch between types seemingly spontaneously, a phenomenon called neutrino oscillation. This discovery resolved the Solar Neutrino Problem. The sun only produces electron neutrinos. Some of these neutrinos oscillate into the other types before they reach Earth. Since physicists were only searching for one type of neutrino, they observed only a fraction of the neutrinos originating from the Sun that reached Earth. McDonald was co-winner of the 2015 Nobel Prize in Physics for his contributions to the theory of neutrino oscillation.

SNO+: the future of neutrino research

New insights into neutrinos could inform how we understand the universe and may hint at physics beyond the Standard Model. After the original SNO experiment was completed, the apparatus was upgraded and renamed SNO+. Today, many experiments are run simultaneously at SNO+, most notably a project attempting to detect a theoretical phenomenon known as neutrinoless double-beta decay (NLDBD). When some atoms undergo a type of radioactive decay called beta decay, they release a neutrino. Many physicists think it might be possible that beta decay does not result in any observable neutrinos. 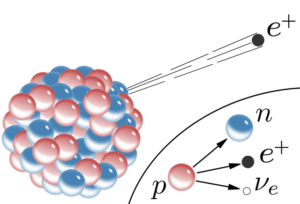 Standard beta decay of an atom occurs when a proton (p) decays into a neutron (n), a positron (the electron’s antimatter twin, e+) and a neutrino (νe). Image: Master-m1000, Public Domain.

NLDBD is predicated on the nature of the neutrino’s antimatter twin, called its antiparticle. All known particles currently fall under one of two umbrellas: either their antiparticle is a different particle (like electrons/positrons), or their antiparticle is identical to them (like photons). If neutrinos are like electrons, NLDBD cannot happen. However, if they are like photons, NLDBD could be observed since the two neutrinos emitted by two simultaneous beta decays will act like a matter–antimatter pair and effectively annihilate each other before they can be observed. This means that being able to observe or rule out NLDBD will shed light on the neutrino’s nature. Some researchers think that this work could help solve the mystery of why there is more matter than antimatter in the universe.

During its ten years of operation, SNOLAB has made significant contributions to Canadian science. From its inception as SNO to its current cutting-edge research projects, SNOLAB has been a center for innovation, and a powerhouse of Canadian astroparticle physics. Physicists have high hopes that research performed at SNOLAB will shed light on two of the biggest questions in physics – dark matter and neutrinos – in the next decade.

Feature image: The Sudbury Neutrino Experiment (SNO) was made up of a 12 m diameter sphere filled with heavy water surrounded by nearly 10,000 photomultiplier tubes that detected the radiation created by neutrinos as they passed through the water. Image: Berkeley Lab, CC 2.0.