With winter just around the corner, some animals start building food caches, while others eat plenty of food to prepare for hibernation. This is also the perfect time for us humans to be proactive about getting enough essential nutrients, particularly vitamin D.

What is vitamin D?

Vitamins are a class of nutrients required for many functions in our bodies. Known as the “sunshine vitamin”, vitamin D is the only vitamin that can be obtained from the environment as well as from food. In fact, we obtain vitamin D primarily through sunlight exposure, as only small amounts of it are present in most foods—despite certain foods being fortified with vitamin D in Canada.

How do we generate and metabolize vitamin D?

One might wonder how a vitamin generated in the skin impacts overall health. The vitamin’s journey begins in our skin, where a molecule called 7-dehydrocholesterol is structurally transformed into pre-vitamin D when it interacts with UVB light photons. Pre-vitamin D is then converted to vitamin D by body heat. Vitamin D from both the skin and diet is absorbed in circulation and transported to the liver, where it is metabolized into 25-hydroxyvitamin D [25(OH)D]. This is the major circulating form of vitamin D, which is used to assess vitamin D status in our blood.

25(OH)D is then transported to the kidney and converted to the biologically active form, calcitriol [1,25(OH)2D]. Upon entering circulation, calcitriol interacts with many organs and tissues, thus impacting a large number of physiological pathways. This in turn explains why vitamin D deficiency is associated with many health conditions and diseases.

What does vitamin D do in the gut? 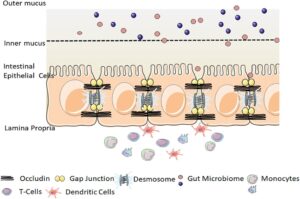 Cells lining the intestine are bonded together, forming a barrier against any noxious substances the gut encounters. Image: Chelakkot et al. (2018), CC BY 4.0.

Along with its well-known role in maintaining bone health, recent research has highlighted the importance of vitamin D in promoting gut health. Studies linked high blood levels of vitamin D to significantly reduced risk of colon cancer. Our digestive systems require a strong first line of defense to deal with any noxious substances we consume (accidentally or on purpose). Vitamin D helps to build a barrier against these substances by strengthening connections between the cells that line our intestine.

Our guts are also home to trillions of microorganisms, including bacteria, fungi, helminths, and viruses, that co-exist within our intestines and co-evolve with us. Collectively, these organisms are known as the gut microbiota. Over the last decade, numerous studies have demonstrated the power of the gut microbiota to affect all aspects of well-being, from metabolism to the immune system, mental health, and more. Therefore, it is crucial to keep our gut microbes happy and healthy – and vitamin D has an important role to play here too.

Vitamin D deficiency has been shown to reduce the diversity of the gut microbiota, which could disrupt some of its many functions, although a direct correlation with any particular disease has not yet been established. Vitamin D also promotes production of bacteria-killing peptides in intestinal cells to limit the growth of dangerous bacteria that exist in the gut microbiota or are acquired through diet, and preserve the delicate balance of co-existence in the microbiota by preventing overcolonization of any members.

Synthesis of vitamin D is reliant on exposure to ultraviolet-B (UVB) rays from the sun. During the winter months, when the angle of the sun is low at high latitudes, UVB rays are blocked by the atmosphere and there is insufficient UVB to synthesize vitamin D. Most Canadians live north of 43oN, so even when they spend time outside in winter, they are unlikely to be able to produce any vitamin D – since UVB exposure is too low between late September and early April. In addition, most people spend less time outdoors in the cold. It’s therefore not surprising that the Canadian winter substantially increases the risk of vitamin D deficiency. The typical Canadian diet does not provide enough vitamin D for optimal health, and the number of Canadians experiencing vitamin D deficiency is 50% higher in the winter than in summer. Data collected in 2010 showed 70–97% Canadians had insufficient (somewhat to severely lacking) vitamin D levels, including 10% who were deficient (severely lacking) in the vitamin.

This lack of vitamin D is related to many chronic diseases, as well as acute conditions.  Keeping vitamin D levels up reduces the risk of developing gut disorders, such as inflammatory bowel disease (IBD) and colon cancer, and is still beneficial for those already diagnosed with these diseases, as it extends life expectancy.

The effects of vitamin D go well beyond individual health. In 2016, researchers estimated annual healthcare spending would be reduced by $12.5 billion if all Canadians raised their vitamin D from the national average blood 25(OH)D concentration of 64 nmol/L to a concentration above 100 nmol/L. Health policy makers and researchers in Canada have been advocating to make increasing vitamin D intake a public health priority.

Getting enough vitamin D in the winter

Given the importance of vitamin D, you may be wondering what to do this winter to keep both yourself and your gut microbiota in the best shape. During winter, Canadians’ main source of the vitamin is diet or supplements. Health Canada advises consuming vitamin D rich foods, including eggs, fatty fish, and fortified dairy products, and suggests that most Canadian adults should take vitamin D supplements between autumn and spring each year.

Hence, as the squirrels and blue jays stockpile nuts and bears build up fat, it is a good time to walk into a pharmacy and stock up on vitamin D supplements!