Did you know there are two Earth Days? April 22nd marks the Earth Day founded by US Senator Gaylord Nelson in 1970. Nelson worked on conservation issues with the Kennedy administration in the early 1960s, and the protests and teach-ins of the era inspired him to do the same for environmental awareness. The other Earth Day, first commemorated on March 21st, 1970, during the vernal equinox, was proposed by peace activist John McConnell to honour the planet. Both are known globally, and the latter is still celebrated today with the ringing of the peace bells at the United Nations in New York. 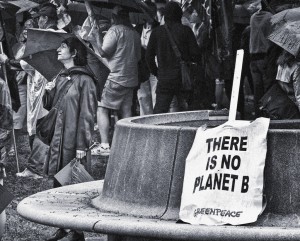 So what does Earth Day represent today, 44 years later? A symbolic day can come across as a nod to a token topic, or a sound bite that fizzles out by the end of the news week. But environmental science issues have increasingly become a mainstay of contemporary society and are not limited to a single day of the year.

US television network NBC recently aired a news special titled “Our Year of Extremes: Did Climate Change Just Hit Home.” In some ways the title reflects the sensibility that the public doesn’t want to compartmentalize environmental issues into a dedicated day, but sees them as a tangible and ever-present reality. Signifying the desire to link together the puzzle pieces for the audience, the show flips between interviews with climate scientists and first hand accounts of people surviving emergencies such as wildfires or massive storms. Recent news stories about climate patterns or intense weather events in Canada and Britain, the economic fallout for aquaculture due to acidifying oceans, and the effect of poor air quality and particulate matter on daily life, have been actively discussed not only as science stories, but in the news and business sections of today’s mass media. The recent release of the IPCC’s 5th Assessment received widespread and in-depth attention across the globe. Interestingly, reporting has continued beyond the first flush of technical facts, with coverage extending to the severe policy and political wrangling that follow the release of this type of mammoth science document.

Our changing world has placed the environmental and earth sciences smack dab in the middle of the wider public discourse. Communicating the science upon which these environmental issues are based is key to effectively understanding, debating, and addressing these issues. From the Science Borealis feed, Kate at Climate Sight discusses how an old post scientifically critiquing the climate disaster movie The Day After Tomorrow has received renewed attention with all the talk about this past winters’ polar vortex.

Given the many people who read, write, talk about environmental issues and the science behind it, it is safe to assume there are just as many who are not engaged. Although the average global citizen is likely more well versed in environmental science than her counterpart in 1970, even back then Earth Day was as much a product of our increasing environmental science knowledge as it was an initiative to educate and promote environmental issues for future generations. Earth Day has never really been a single day with a static meaning, but a marker in the ongoing stewardship of our planet.

Share what Earth Day means to you in the comments below, or join the discussion on Twitter @ScienceBorealis!

Some recent highlights from the Environmental and Earth Science feed on Science Borealis: