In the forests of British Columbia, waves upon waves of trees extend through the mist. But beyond the mountain lies a clearing — a land peppered with tiny saplings, like newborn phoenixes rising out of the battered forest floor.

Yet a gritty reality underlies this mythical scene. This regeneration is really a restoration of the trees clear-cut by logging companies. In BC, it is the responsibility of these companies to reforest the areas they harvest, with the aim of restoring and/or maintaining a healthy forest system. The image of a young tree rising out of debris is only the tip of the iceberg. Getting the sapling from a seed in a bag to a tree in a forest involves two processes: growing seeds into saplings in a nursery and planting those saplings. The latter part is accomplished by tree planters, who engage in a laborious activity that isn’t for everybody — and there are good reasons why.

In one day, a tree planter is expected to plant at least 1000 saplings.

In one day, a tree planter is expected to plant at least 1000 saplings. That means bearing the weight of these saplings — distributed throughout the day — bending down to shovel them into the ground, and doing it over varying, often difficult, terrain and in any weather. A tree planter also has to be wary of wildlife and bugs, oh so many bugs. From my sheltered, ‘urban’ position, this sounds like hell. Yet tree planters have managed to plant a billion trees in the Prince George Natural Resource District alone since 1959.

Apparently, the job fosters a camaraderie between co-workers who share the toils of the day, and it pays rather well. It comes as no surprise that money would be a key motivator in this line of work. As a result, more young people are gravitating toward tree planting as a profession. One such person is recent Emily Carr University graduate Jennifer Koester, who made her grad film, Free To Grow, about tree planting. I was fortunate to attend the screening where the film — a final thesis of sorts — premiered. 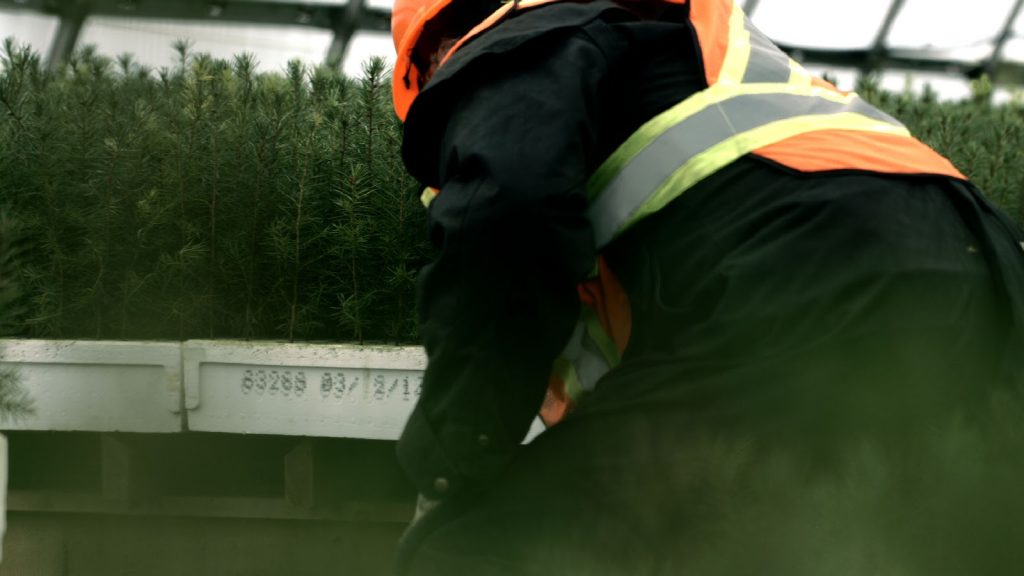 A worker stands in front of crates of machine-planted saplings in this image from Koester’s film Free To Grow. (via theshow.ecuad.ca)

The film, sans dialogue or narration, guided the audience through a Vancouver Island nursery and took them out into the field. The audience was visibly transfixed by the cinematography, which depicted rare scenes of the industrial side of tree planting. They watched the seedlings being transported through the movement of machines and workers. The central role of machines in facilitating life defines a captivating contrast that the film shows brilliantly.

Soil was poured and pressed, seeds were scattered, and thousands of seedlings rolled out from barrelled crates, all with minimal human intervention. The scenes that depicted the actual tree planting featured Koester and a co-worker using a slender shovel to pry apart the earth for each sapling cradled in their bags. Before the end, a quote from Charlotte Gill, author of Eating Dirt, appeared across the screen:

“We look out on the day, at our fields of seedlings. There, we did this with our hands. We didn’t make millions and we didn’t cure AIDS. But at least a thousand new trees are breathing.”

Seeing the tree planting business from an artist’s perspective is a refreshing contrast from stories that only emphasize how tough the work is. And maybe we are deceiving ourselves if we expect any romanticism in this industry, which is no less corporate or mechanized than any other. But none of this matters to the trees. They grow on regardless, only to be harvested decades later when logging companies return and the cycle begins again.