It can be hard to think of the right gift for that special someone, so Science Borealis is here to help! We’ve asked our team for some of their favourite books to help inspire your science-related gift giving. From novels to nonfiction, these books make great gifts for scientists, science enthusiasts or future science lovers. The list also includes recommendations for young people who may be inspired to a life of science by some of the great science communicators of our time. 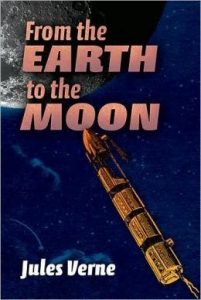 Jules Verne is considered one of the original science fiction writers. Just over a century before Neil Armstrong’s small step for humankind, Verne created this incredibly imaginative masterpiece that inspired generations to shoot for the moon.

Verne based his works on actual science, and it struck me how accurate much of the book was. Written in 1865, Newtonian physics was still relatively new and, like any good science fiction, Verne made some leaps that may or may not be possible. However, he made a solid effort to approach the idea of going to the Moon very scientifically. I read it after I’d finished my undergraduate degree in physics, and enjoyed both how much was correct in Verne’s assumptions of what was required to get to the Moon, and how much Verne actually got wrong. A very fun read! 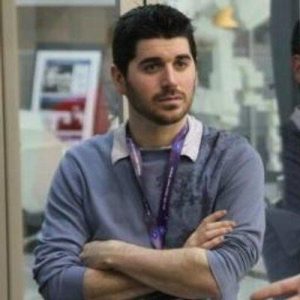 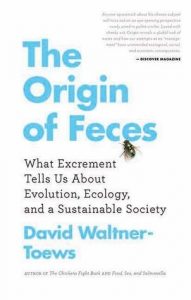 The Origin of Feces: What Excrement Tells Us About Evolution, Ecology, and a Sustainable Society by David Waltner-Toews
Ecology/Development/Popular Science
Audience: General Public/Science Enthusiasts

David Waltner-Toews is a retired Canadian epidemiologist, veterinarian, and writer. Raised in a Mennonite community, he is the founder of Veterinarians Without Borders, Canada.

Waltner-Toews wants you to know why poo matters. Exploring the importance of waste from a wide range of perspectives, The Origin of Feces gives us a glimpse at how integral it is to biodiversity, public health, agriculture, and more. From dung beetles, to human waste management, this book touches on it all and highlights how feces touches every part of our lives. 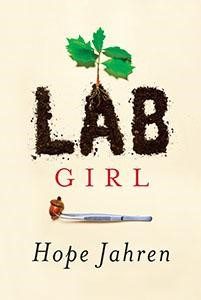 Plants can seem pretty boring until you view them through expert eyes. In Lab Girl, Hope Jahren does just that, sharing her passion for plants and revealing their magical world to us all. What’s more, her memoir shares the story of a life in science, and reveals the thousands of joys and difficulties that arise when your job involves trying to understand the world around us.

This book is an exquisite mix of memoir and metaphor. I was struck by the way Jahren laid bare her personal story (and what a story it is!) but even more, by the way she used alternating chapters on the science of trees as metaphors for her own journey as a scientist and a person. I would love for every science-minded young woman (high school and up) to own a copy of this book.

Note – Lab Girl was listed as one of the top 10 non-fiction books of 2016 by Time Magazine! 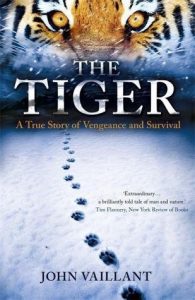 Most humans aren’t used to being prey. To the world’s largest cat, however, moving silently amidst the snow, we are very much a part of the food chain. Vancouver-based author John Vaillant recounts the real story of a man-eating tiger, and follows the people who are trying to ensure it doesn’t strike again.

Vaillant’s vivid prose transports you to a remote region in Russia, making it feel like you’re actually there, trying to solve a real-life mystery. The book was based on a documentary Vaillant first saw at the Banff Mountain Film Festival. 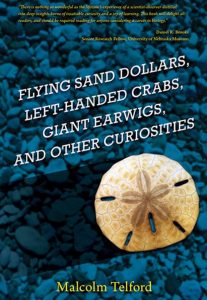 Science can seem remote from our day to day lives, but Malcolm Telford, a retired zoology professor from the University of Toronto, shows us otherwise. His collection of essays will take you on research trips, explain why your cells are communities and, most excitingly, address ‘satanic left handedness”, the trade in bird poo, and Telford’s attempt to make haggis.

Telford’s book combines personal anecdotes with stories about science and history, and a huge dose of humour. This book would appeal to the general reader who enjoys Stephen Jay Gould’s essays, and is interested in evolutionary biology and general history. The broad range of subjects and unexpected interconnections between ideas will stick with you. This is a funny, unforgettable romp through the world of natural history. 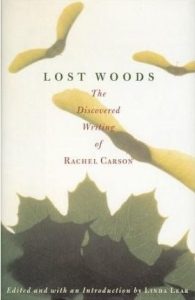 Rachel Carson’s dogged efforts to expose issues with pesticides and other environmental contaminants led in large part to much of the environmental progress we see today. Her passion about her subject stemmed from a deep love and respect for the natural world, explored here in an outstanding collection of essays. Readers will also get to know more about the woman herself, and understand what drove her to such extraordinary lengths to protect wildlife.

This collection of Rachel Carson’s work offers a broader view of her lifelong connection with the natural world and both the joys and challenges she faced along her path. Look for some Canadian content in the essay Even Mountains Vanish. 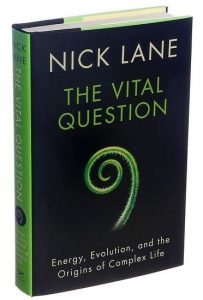 In this outstanding follow up to his award-winning Life Ascending, Nick Lane delves deeper into the biggest of big questions: the origin of life itself. In focusing on the integral role of energy in making life possible, Lane helps us understand both what may have happened in the primordial seas, as well as the more mysterious evolutionary steps between tiny bacteria and multicellular life.

I wasn’t sure what to expect at first, but I was soon deep into this fascinating labyrinth through the big questions of life. This twisting path from physics to phylogenetics shows the problems of the “primordial soup” explanation, and even offers tantalizing glimpses into sex and death. 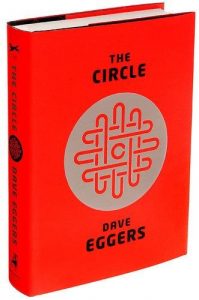 Every corner has a camera, and every click is recorded. The Circle explores a world where technology and corporate influence mean nothing is secret, and every action is laid bare for the world to see. Sound distressingly familiar? Explore this dystopian vision of a future where you can’t escape from your past or present.

The main message of this book is that, while many technological advances seem convenient, they can become dangerous in the wrong hands. Science and technology are essential to society, but critical thinking and careful regulation are equally important when it comes to using new concepts or tools. A movie adaption of the book, starring Emma Watson and Tom Hanks, is set to be released in 2017. 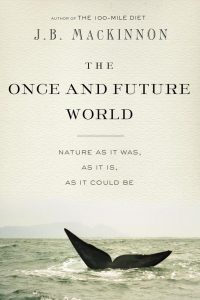 It can be depressing to be ceaselessly reminded that our planet is in peril. Instead, Vancouver author MacKinnon looks at the positive. While he charts our impact on the world, he also showcases the majesty of the wild pre-humanity and shows how, with a little philosophical reframing, we can come to value and respect the species that share our home.

This could easily have been a doom and gloom book, but MacKinnon injects hope into it as well. Pair with UK writer George Monbiot’s Feral: Searching for Enchantment on the Frontiers of Rewilding. Readers interested in ecology, restoration, and the philosophical issues behind restoration and wilderness management will enjoy this book. An essential read for anyone concerned with how we can share Earth with the rest of nature. 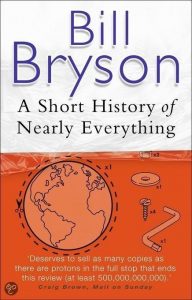 When you studied science in school, did it seem as though it was just a collection of facts and figures to memorize? Bill Bryson thought so, and in this hilarious and witty tale tries to cover all the really good stuff from across all the sciences. From charting the size of the earth to the community inside the cell, from supernovae lighting up galaxies to the first humans, Bryson takes the reader on a tour to see just how magical the world around us really is.

I was a cocky 16-year-old who, after reading maybe 50 science books, thought that a general science book couldn’t possibly hold my interest. I’ve since read it three times, and it remains my favourite science book ever written. Not only did I learn more from it than any other book I’ve read, but it also introduced me to Bill Bryson – now my favourite author. It’s relatively basic and written in a style that a science novice will understand it, but it’s quirky enough that a specialist would also enjoy it. It’s also funny, which is unusual and welcome for a science book. Simply put, it’s my favourite general science book ever. Were I to pick a book to take to a deserted island, this would be it!

Note – Get the version with pictures and illustrations, it’s nicer! 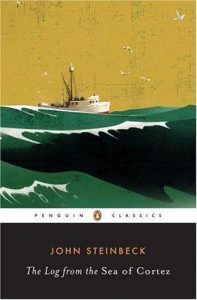 Not all scientists sit behind lab benches all day. In this travelogue of a scientific expedition, Nobel Prize-winning author John Steinbeck shares the story of specimen collecting, beautiful vistas, and the joys of getting away from the world with a friend.

There is more to science than the scientific method, something that it was important for me to understand when I was 16. This book is great for armchair travelers, real travelers, and biologists. This book is a piece of a larger work called Sea of Cortez. 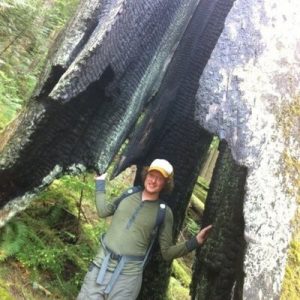 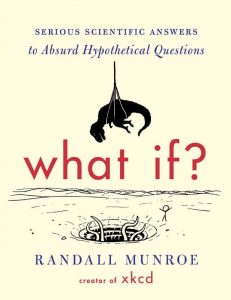 What if all the rain in a storm were condensed into a single drop, or the oceans drained away through a hole in the Mariana trench? Exploring everything from Yoda’s force power to machine gun jetpacks (yes, please!), Randall Munroe hilariously uses comics to take us through serious scientific answers to absurd hypothetical questions. Yes, it’s really as awesome as it sounds.

Munroe provides hours of fun speculation and imagination. The scenarios sometimes keep you thinking long after you put down the book. I gave this as a birthday present to my nerdiest friend, and he loved it, so I know it’s a good gift. This might be a fun way of getting young people into science! 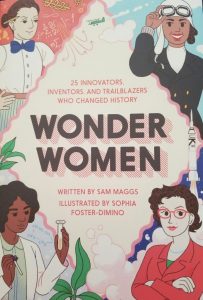 Science has always been accomplished by a diverse collection of people; we just don’t always recognize those accomplishments. This book profiles a variety of women (sexual orientation, race, cultural background, etc.) from all points in history who worked in science, technology, engineering, espionage, and mathematics. It’s a history of cleverness told through the stories of characters who are all too often erased from textbooks.

Great for people curious about the hidden women who shaped history with their cleverness, and the modern women doing interesting things in bizarre corners of STEM.

Note – Look for Mika herself as one of the featured scientists! 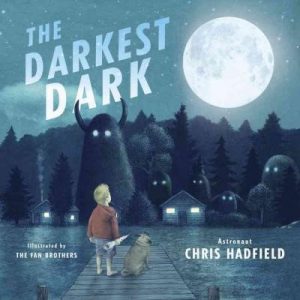 An astronaut who was afraid of the dark is both a bit absurd and deeply reassuring. If he could overcome his fears to do something so amazing, and then later admit to them, can’t everyone? The Darkest Dark is an inspirational, feel-good read with strong moral modelling and a STEM-friendly messages. Being scared isn’t something to be ashamed of.

Canadian astronaut Chris Hadfield pens a children’s book that explores some of his fears and the drive to do wondrous things. A great inspiration: it can help kids not only understand and overcome their fears, but inspire an interest in science, and introduce them to one of Canada’s great science personalities (if they don’t already know him!).