Back in August, the world was buzzing with news that thousands of tardigrades, resilient micro-animals often referred to as water bears or moss piglets, had crash-landed on the Moon. But were these ancient Earthlings even supposed to leave our planet and, if not, how did this happen? 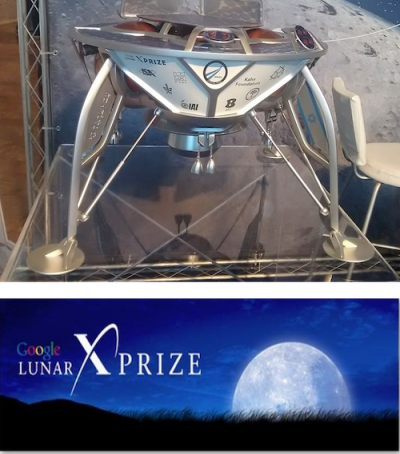 Until now, only government-led missions by the USA, the former USSR, Japan, China, India, and the European Union have succeeded in sending probes to the Moon. However, the spacecraft that transported the tardigrades to the lunar surface, named Beresheet, belonged to SpaceIL, a non-profit Israeli organization funded primarily through private investment.

SpaceIL was a participant in Google’s Lunar XPrize, a competition conceived in 2007 to stimulate private funding for space exploration by having a space craft soft-land on the Moon. The competition included over 20 entries from all over the world, including one Canadian team named Team Plan B, based out of British Columbia. Unfortunately, the competition was cancelled last year when none of the teams were ready to launch two months ahead of the deadline.

Undeterred, several groups forged ahead with their plans, including SpaceIL, which launched the 585-kg Beresheet on SpaceX’s Falcon 9 rocket in February. To save fuel, the spacecraft leveraged gravity and propelled itself towards the Moon by widening its elliptical orbit around Earth. The two-month journey proceeded smoothly and Beresheet even sent back close-up images of the Moon’s surface. As Beresheet descended towards the Moon, it began slowing its entry speed down from 6000 km/h to zero (to achieve a soft-landing), but a mere 7 km from the surface its engines abruptly stopped firing. This was later attributed to a malfunction caused by a glitch while uploading a command to correct a sensor problem. Despite restarting the engines, the control room lost communication with the spacecraft and the lander crashed. 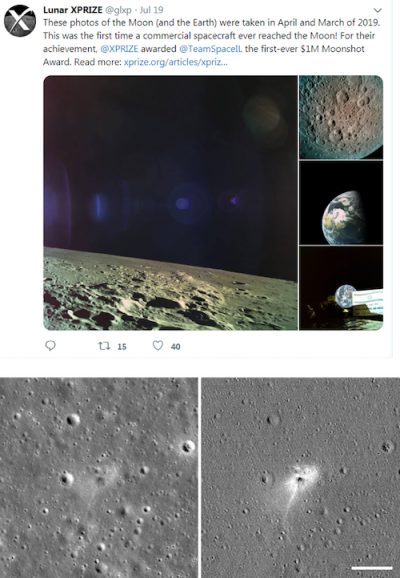 Although the XPrize didn’t ultimately hand out the grand prize of $20 million, it did award smaller prizes to teams that reached milestones such as developing an effective lander system or imaging subsystem. The XPrize also elected to recognize SpaceIL’s achievements outside of the active competition by awarding them $1-million-dollar Moonshot award. Several former XPrize teams have since refocused their efforts, including Team Plan B, which is currently working on an approach to use lunar surface rock and dust to develop on-site manufacturing which would help to reduce mission payload costs.

The dramatic end to SpaceIL’s lunar lander was not the end of the story. In addition to a magnetometer (intended to measure the magnetic field of the moon) and a laser retroreflector (added by NASA to test its potential as a navigation tool), both of which were destroyed in the crash, Beresheet also carried the first instalment of the Lunar Library, a DVD-sized archival disc. The “library” is an outpost of the Billion Year Archive (BYA), which aims to send archives of human civilization across the solar system and bills itself as the “largest footprint and longest duration engineering project in human history.”

How is such a grandiose vision accomplished? In terms of technology, it needs to start small. The group behind the BYA, the Arch Mission Foundation (AMF), has been working on developing durable and ultra-long-term storage technologies that are small and lightweight enough for spacetravel and can withstand the test of time under a variety of environmental conditions.

In 2018, the BYA sent up its Solar Library, which included the entire Asimov Foundation Trilogy inscribed on a thin quartz disc using a 5D optical technology created at the University of Southampton’s Optoelectronics Research Centre. The disc sits inside the glovebox of Elon Musk’s cherry red Tesla roadster, which will orbit our sun for the next 30 million years. The AMF also has another archival mission called the Leo Library in low Earth orbit.

For the Lunar Library, the group decided to use Nanofiche, a 1-mm-thick, 100-g disc composed of 25 thin nickel films (each only 0.04 mm thick) created using optical nanolithography. Data are first etched on glass by a laser, then electrodeposited onto nickel and can be read by a 1000x optical microscope – no computer needed. The Lunar Library disc contained a 30-million-page archive of human civilization, including the complete English version of Wikipedia, linguistic keys to thousands of different languages, over 30,000 books, a yet-undisclosed selection of music, and the secrets behind David Copperfield’s illusions. Arch Mission co-founder, Nova Spivak, has also hinted he plans to reveal even more secrets on the disc in the future.

It turns out Spivak’s team is full of surprises. The initial Lunar Library had only been intended to hold information, but without officially informing SpaceIL, Spivak and the AMF team decided to add a smattering of biological specimens to the disc – including the now notorious tardigrades. In addition to these tiny emissaries from Earth, the scientists also distributed hair follicles and blood samples from a group of 24 genetically diverse human beings (including Spivak) and some samples from holy sites on Earth, such as soil and a leaf from Buddha’s Bodhi tree in India, into thin layers of epoxy resin between the layers of nickel. Although it’s believed the disc survived the crash, since the tardigrades are stuck in a dehydrated state within the resin, it is unlikely they will awaken without liquid water and food.

Meanwhile two former XPrize teams – Astrobiotic and PTScientists – are going ahead with their missions to the Moon in the near future and, like SpaceIL, plan to carry new instalments to the Lunar Library. The exact nature of biological payloads on these discs has not been finalized, but the plan is to include more genetic material. Sergei Dobrianski, a member of Canada’s Team Plan B acknowledges that, while sending tardigrades to the Moon was interesting, other experiments such as studying the “irradiation impact on the materials that could be found at heritage sites” on the lunar surface are important.

Dobrianski also raises an essential question of whether transporting archives is the best use of precious payload space. “Would it be a bad idea to instead deliver a payload that’s going to build a greater foundation into our solar system? Or, a payload with an experiment that can open up a new realm? Because a hundred years from now, that archive may become irrelevant.”

Although sending the biological payload on Beresheet did not break any official regulations concerning space contamination, the move by Spivak, which did not appear to involve wider consultation with the scientific community, has caused concern among experts, including NASA’s Planetary Protection Officer.

With the potential of more non-governmental agencies participating in space exploration, the debate around creating and updating international protocols has been re-ignited. The path forward is not yet clear but it is important for us as a species and a planet that we carefully consider the mark we want to leave in our solar system and beyond.

Banner image: (Left) The Earth as seen from inside Elon Musk’s Tesla Roadster currently orbiting our Sun. The Arch Mission Foundation Solar Library is tucked away in the glovebox; (Middle) Lunar XPrize tweet showing a close up of the Lunar Library disk that was aboard the Beresheet spacecraft; (Right) Microscopic image of hydrated (TOP) and dehydrated (BOTTOM) tardigrades.