Jayme Lewthwaite, a PhD candidate who studies evolutionary biology at Simon Fraser University, enters the grand halls of the Smithsonian Institute of Natural History in Washington, DC. She walks past the elegant and elaborate exhibits, heading to the sun-lit research labs. 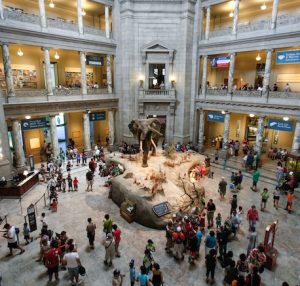 The Smithsonian Institute of Natural History in Washington, DC. Photo by Alex Proimos

She climbs to the floor labelled ‘Lepidoptera Collections’, which contains over four million butterfly and moth specimens meticulously organized and stored in 30,000 drawers. These specimens were collected by scientists and naturalists around the world throughout the 20th and 21st centuries.

She chose to study and examine these patterns in Canadian butterflies because they have short lifespans and are sensitive to environmental changes. Butterflies respond to changing climate quickly in ways that are fairly easy to track. Furthermore, because butterflies are popular organisms, insect collectors and researchers have deposited many specimens in museum collections.

Historically, animal and plant specimens were collected for anatomical and taxonomic research, allowing researchers to organize the vast diversity of life into different classification levels. Charles Darwin is perhaps the most famous collector. The specimens he gathered on the Galapagos Islands allowed him to review evidence, observe variation in related species, and formulate his theory on evolution by natural selection.

In Canada, over 40 natural history museums contain millions of specimens in their research collections. The Canadian Museum of Nature in Ottawa, for example, contains diverse collections of animals, plants and fossils. In addition, some collections specialize in particular kinds of organisms- as its name suggests, the Canadian National Collection of Insects, Arachnids, and Nematodes, focuses on invertebrates.

Lewthwaite and other scientists recognize the wealth of information contained in such collections. With her research, she seeks to determine how Canadian butterflies have shifted their ranges over space and time because of climate change. She builds on past work by other biologists in order to better understand the future. 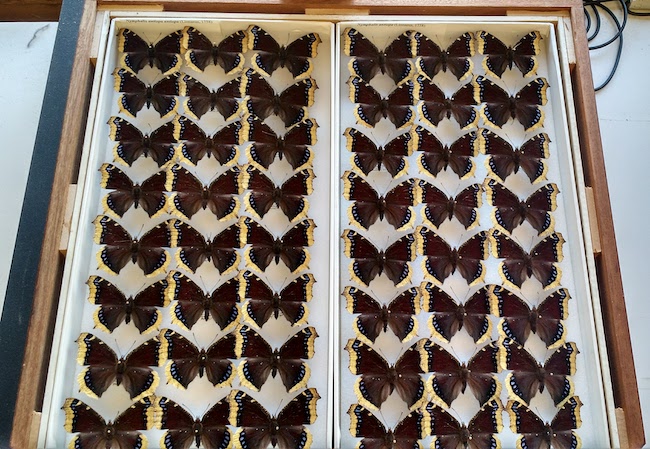 One of the 30,000 drawers containing butterfly specimens at the Smithsonian Institute. Each specimen contains a record of when and where they were collected. Photo by Jayme Lewthwaite, used with permission

Big data refers to large amounts of data samples that can be used to generate mathematical models and analyze resulting trends. The analyses are vital in exploring global changes that span extensive spatial and temporal (time) scales.

To carry out her research, Lewthwaite must first transfer and input 25,000 written specimen records across 130 species of Canadian butterflies from the Smithsonian Institute into electronic databases. Each record contains information on where and when an insect was collected.

The information will help her create the following tools to help her understand and anticipate Canadian butterflies’ ecological and evolutionary responses into the future:

The resulting insights will be key to determining how to best prioritize and protect butterfly species as climate changes. 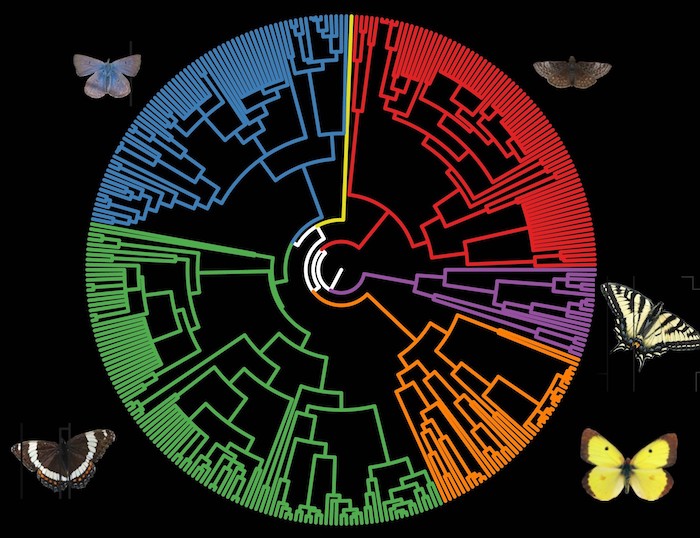 Far from the Smithsonian’s extensive butterfly collections in Washington, DC, Lewthwaite applies her research ideas and methods at the regional scale in British Columbia.

She uses historical records from the Royal BC Museum and the Beaty Biodiversity Museum, as well as modern records from the citizen science app, eButterfly, to explore how interactions between butterfly species in a given spatial grid have changed over time as climate has warmed. Combining historical and modern records allows her to analyze trends within BC without having to conduct extensive field work across the entire province.

Her research suggests that, as climate warms, species with multiple host plants (generalist species) are adapting well compared to species that rely on only a few host plants for their life cycle (specialist species). 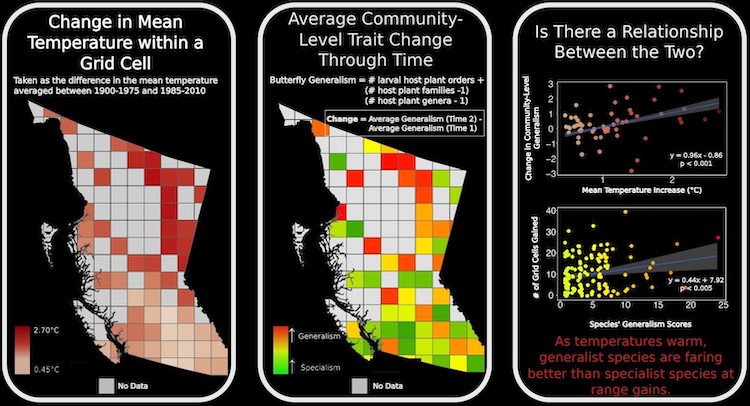 The relationship between increasing temperatures and generalist butterfly communities throughout British Columbia. Figures by Jayme Lewthwaite, used with permission

It also confirms that BC’s Okanagan region has a unique evolutionary history and diversity. Its hot, sunny, dry climate creates a desert-like environment that allows organisms like mormon metalmarks, rattlesnakes and cacti to thrive and supports a rich, distinct biodiversity. This unique ecosystem is found nowhere else in Canada, but widespread urban and agricultural development threatens its integrity. Lewthwaite’s research aims to provide evidence and solutions for conserving these rare habitats.

Her early analyses demonstrate how important natural history museums are and how using their collections for big data can help visualize and predict climate effects on biodiversity across large geographical scales.

She says, however, that natural history museums are typically underfunded and underappreciated resources. Despite the collections’ rich scientific information, funding and grants for this type of research are scarce. In addition, gaps in the electronic specimen databases reduce their accessibility to researchers.

She hopes her work with butterflies will be used to promote the importance of natural history museums to research and to communicate the bigger messages of how changing climate is impacting wildlife and their ecosystems.

Kris Cu is a student at Simon Fraser University. She wrote this post as part of Science Borealis’s Spring 2019 Pitch & Polish, a mentorship program that pairs students with one of our experienced editors to produce a polished piece of science writing.