Some time ago, we talked to artists about what sciart is to them and what it could be. Various fields of science holding hands with art’s indefinability results in a complex relationship.

In this post, rather than pinning down sciart’s definition, we’re going to explore some other questions to consider when looking at it.

The recent #SciArt #TwitterStorm, in which participants tweeted their own sciart and retweeted that of others, illustrated the diversity of approaches to melding art and science. With all this work out there, what can we do, as advocates of art and science, to better appreciate sciart? We’d like to foster interest in, and engagement with, sciart so that its value goes beyond how much it costs or how many likes it gets.

An article by Kit Messham-Muir based on the work of art historian Erwin Panofsky outlines a three-step strategy for looking at art: Look. See. Think. Looking is observing what the elements are. Seeing draws meaning from it. Thinking links personal experience and accessible information to the piece at hand.

Looking and seeing is also part of the Visual Thinking Strategies (VTS) method originally developed for looking at art and subsequently applied to science and other subjects as a social, object-oriented learning process. It begins by asking, “What is going on here?”, followed by “What do you see that makes you think that?” This allows learners of different backgrounds to participate and encourages the pursuit of evidence to back up opinions.

Let’s see how these approaches might work on your own or in conversation. Take, for example, the following work by natural history illustrator Julius Csotonyi: 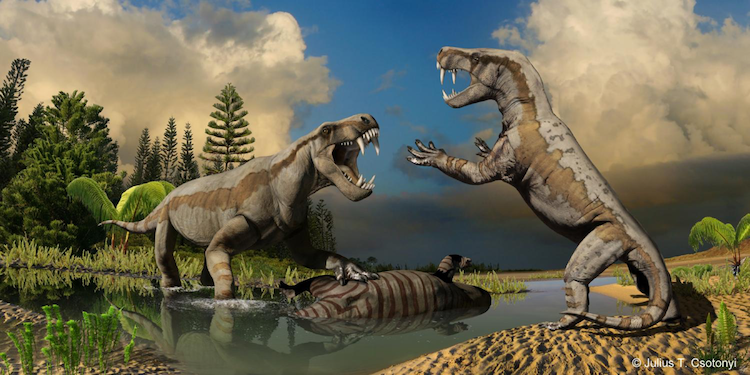 What do you see?

Raymond: It looks to me like two creatures are fighting over breakfast. One of them bares its long sharp teeth and has its foot on an apparently dead animal in the water.The other is reared up, brandishingboth its claws and teeth. They both seem to be the same species because they have similar shapes and skin patterns. What do you think is going on here?

Katrina: I’m looking at two creatures with their teeth and claws out ready to engage. They are in broad daylight, and the dark clouds in the background suggest their confrontation won’t be a pretty sight. The flora and clouds seem photorealistic. The creature in the water has a different appearance in the colour and patternof its stripes, but because I can’t see its whole body I can’t say for sure if it’s a different species or if it’s prey or if it’s like a female dragonfly playing dead to avoid the pursuit of males.

What does it make you think of?

In the Panofsky approach, the third step is “Think”, which involves connecting what you know to the picture. Interdisciplinary artist and independent curator Wynne Palmer says, “When considering works of sciart, I give the same due diligence in research as I do with all academic artists. This means looking into the historical overview and current state of the chosen topic, [and looking] for academic references and sources [for both art and science].”

In January, both of us attended a Curiosity Collider event in which Csotonyi was a speaker. He has a science background but now works as an artist. With a computer, he is able to paint digitally and combine different images. This also allows him to revise images more easily if he wants to update them to reflect the latest scientific discoveries.

While Csotonyi’s work is clearly a scientific illustration, other forms of sciart need not be so representational. In either case, looking at other examples of their work, can help you appreciate the work at hand. How does it compare in style, technique, content? Is there a pattern? A series?

Larissa Blokhuis, organizer of Huisje (how-sh-ye), a private space for art critique, suggests, “The existing questions should point the viewers toward recognising any scientific content, if that content is expressed effectively.” So the next question to ask could be…

Which branch(es) of science are involved?

According to Cstonyi’s website, the image is called Gorgonopsians. It was a photocomposite (digitally combining multiple images) mural for an exhibit called Permian Monsters: Life Before the Dinosaurs and it features “Dinogorgon squabbling over a dicynodont’s body.” Like a gallery placard, it describes the artist’s intention and tells us what is depicted and how it was made. And it makes us think of natural history, paleontology, what the mural would look like at full scale, fossils, Photoshop, biology, colour, ecology, species interaction, and how imagination mixes with scientific information.

What do you feel?

If you want to appreciate a work or connect with it, meaning has to be created. Do you feel impressed? Curious? Perhaps even confused? These may be signs for you to dig deeper.

You don’t have to force meaning – if you don’t like something, you can move on to something else and, of course, you’re under no obligation to spend so much time with any work of art.

Is it a successful work of sciart?

The work is a highly detailed, beautifully rendered image backed by scientific research, but how do we know it’s a successful work of sciart? Jen Cook, Creative Director at Science World British Columbia (which has an ongoing gallery of sciart in the foyer), suggests that “What makes for a ‘successful’ work of sciart is work that brings a new perspective to examine, express or experiment with scientific theories.”

It’s as impossible to see all the art in the world as it is to digest all the faculties of science, but sciart offers a taste of both. If even just one work of sciart gets your attention, we encourage you to look closer, ask questions, read the accompanying text, and even attend a reception to talk to the artist.

Yukiko Stranger-Galey, Exhibits & Design Manager for the Beaty Biodiversity Museum, described the value of experiencing sciart this way: “Without preconceived notions of what they want or expect to see, visitors can simply journey the experience of the present, which might lead them along some unexpected, uncomfortable, but ultimately rewarding paths.”

How do you approach looking at sciart?

One thought on “How to look at (and appreciate) SciArt”