Art is the Queen of all sciences communicating knowledge to all the generations of the world â€“ Leonardo da Vinci.

Our multimedia category deals with diverse and unexpected approaches to communicating science. As the love child of science and art, “SciArt” can have an even broader perspective, melding the universal knowledge born of science with the humanizing personal vision essential to art. To find out more about this interdisciplinary concept, we sought the perspectives of some people who create SciArt. They are scientists, artists, both or somewhere in between, all sharing a deep appreciation for science and art, as evinced in their work and words below. 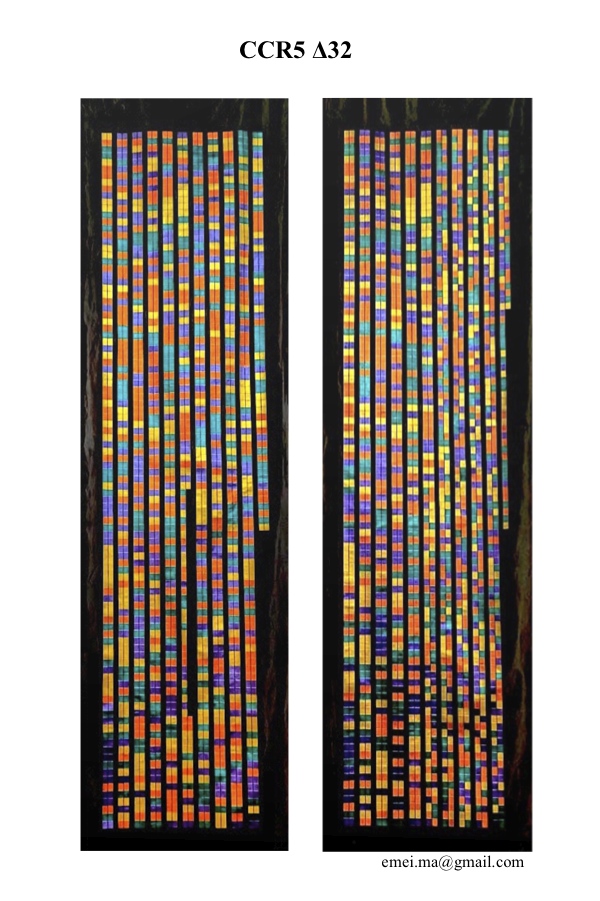 CCR5 Delta 32 DNA Sequence. Two 3-m tapestries that show DNA deletion mutation. The colours represent the four different nucleotides. The normal CCR5 is on the left, the mutation is on the right. Image used with permission of the artist.

“This definition works fairly well because it includes all forms of art and all topics of science, while excluding most funny cat videos… My objective to communicate science will influence every decision I make about the art. As a result, the science permeates the art in multiple ways.”

“SciArt is a practice that bridges two fields that were never meant to be thought as opposites…Today’s SciArt practices are still, in a way, kind of similar to…early books, in the sense that they also arise from rigorous research about the “natural” world…this is a key element of SciArt: it has to have a research component in it, and not simply be a representation of nature or of scientific facts…the way most scientific research is set up right now sadly precludes this crucial transdisciplinary conversation, and encapsulates the sciences in a Babel tower with an aura of cold objectivism.

“So, although SciArt does communicate scientific research, to me it has to do more than that. I think of it as “what if” scenarios that, by expanding the subjects at hand, specifically through hands-on experience, but also through semiotics, analysis, metaphors and new narratives, does not just present research, but really adds to the dialogue.” 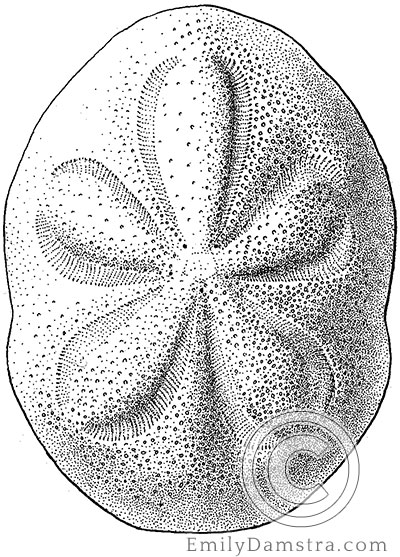 Sea Biscuit. Illustration. Image used with permission of the artist.

“Science art is any work of art that involves science in its creation (in a deliberate way) or deals with the subject of science. I consider science illustration to be a form of science art as well as a niche in the broad category of ‘illustration.’” 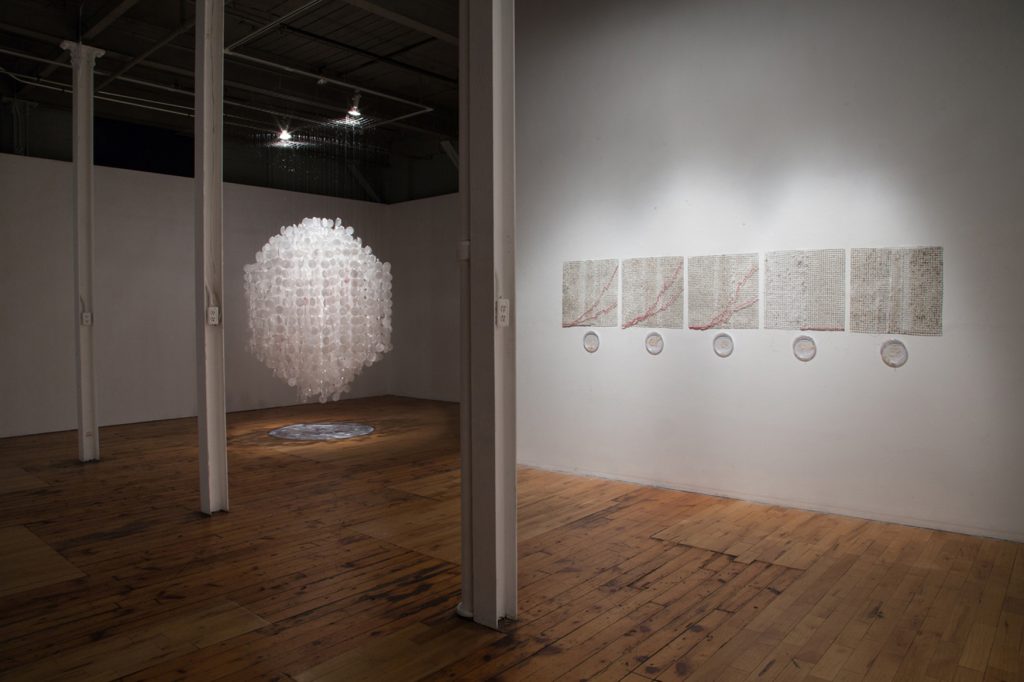 “SciArt marks the point of contact of art and science. At the heart of both is the excitement of discovery and uncovering what cannot be seen, realigning our relationship to the invisible world. My artworks alter the landscape of art by considering and incorporating science, specifically biology. Traditional art materials are combined with organic and live organisms, and often deploy scientific methods and technologies. This is necessarily a transdisciplinary practice that pushes the boundaries between art and science.” 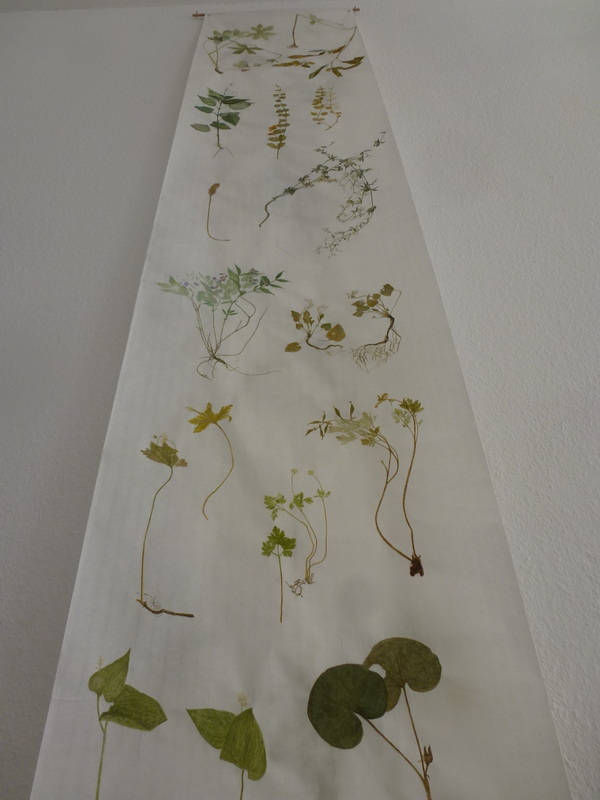 “SciArt is a complex concept, calling immediate attention to the knowledge-sharing discourse and bridge that is being built when collaborations happen between scientists and artists. What I, as a visual artist and non-scientist, have discovered in my collaborations with botanists is that we are similar in the way we search for meaning that is expressed in a form, an organism, a pattern, a system. We name things, e.g. species, specimens, ecosystems, and we bring these things into the light in order to communicate and refer to their existence, their vitality, their behavior and their effects. We observe, experiment and raise questions that ponder how and why particular eco-systems have become fragile and why they need mention and [to] be safeguarded.

“In fact, whether we are aware of it or not, Art as well as Science is present in everything, but [is] highly dependent on the context and perspective from which it is viewed. As for my work, I will leave it up to the viewer to decide whether or not it fits into the concept SciArt.”

Cara Gibson â€“ Assistant Professor of Practice and the Director of Science Communications in the Dept. of Entomology, University of Arizona, and freelance science artist

“I’m a fan of inclusivity and for me SciArt is any kind of art that helps to convey any kind of science. So for me SciArt includes theater, dance, music, sculpture, digital, other fine visual arts â€“ you name it! I know some of my colleagues differ in this, but fundamentally what appeals to me about SciArt is its ability to bridge critical gaps; the more varied our bridges, the better off we’ll be!!” 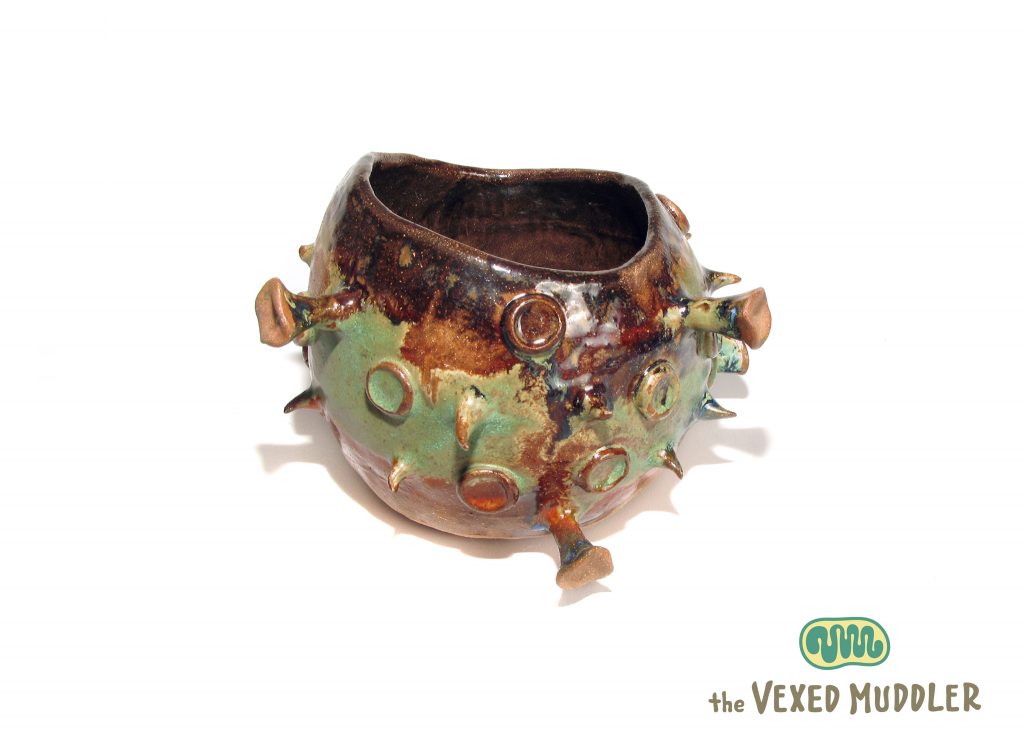 Ceramic virus vessel. Image used with permission of the artist.

“I think an honest attempt to be scientifically accurate (or at least only fudge the details where it helps to communicate a truthful message) is a critical component of SciArt, but within those parameters, I define SciArt quite broadly…In fact, I’m probably more generous in my definition of SciArt than I am in my definition of ‘Art’! …In many ways I think art and science are natural bedfellows â€“ both artists and scientists seek to explore the world and our place in it on some level, and science relies on art for communication as much as art relies on science for inspiration and tools.

“On a more personal level, SciArt is for me a way to learn about and explore things I don’t get to study in the lab…It’s connecting to a wide world of minds that are engaged in learning all these beautiful things, and sharing my excitement about the world…Perhaps most importantly, it’s being part of a community of science artists who share my fascination and joy for the world.” 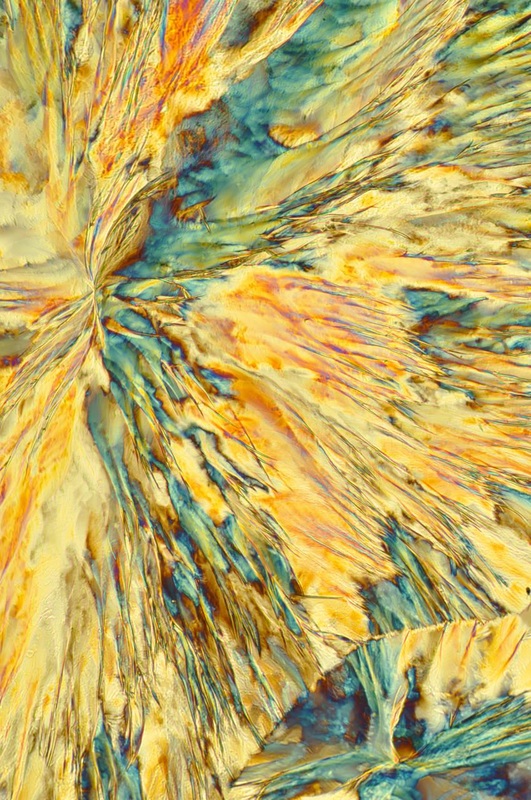 Crystal microscopy of Aspirin. Image used with the permission of the artist.

“My views are strongly coloured by my background as a professional scientist and science educator. For me, SciArt is first and foremost a tool for science education and outreach.

“The main challenge in science communication is convincing your audience that they should care about what you’re saying. The absolutely worst way to do this is to lead with a lot of words. Words are only useful if someone bothers to read or listen to them; they should come later, after you’ve persuaded your audience to engage in a dialog…SciArt is an invitation to discussion. Like the billboards that lined the highways of my youth, art derived from and inspired by science is an enticement to take a detour… Good art is disruptive; it challenges assumptions, and provokes responses that are immediate and visceral. SciArt is a sign that says: ‘Here is something worth seeing, worth listening to, worth engaging with.’

“As I read over this text, I am struck by the irony that I am using words to justify the use of art as a means to avoid using too many words.”

Lingering at the intersection of art and science, SciArt is diverse and its boundaries can be elusive. It can be appreciated in its own right and as a gateway to a greater visibility of science in our culture and daily lives.

A huge thanks to everyone who shared their SciArt and thoughts about it with us.