By Yiorgio Mathioudakis, for the second season of the New Science Communicator series. 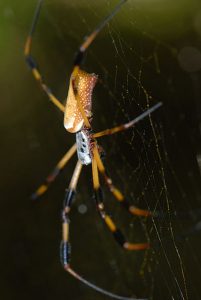 What’s really being asked here is: “What can material science tell us about spider silk?” Material science revolves around the premise that each characteristic of everything we use in day to day life has the potential for improvement. This discipline has been a major factor in human advancement since the ancient times, propelling tasks like smithing and construction, among others. However, it was limited to an overall macroscopic scale and so the discovery of quantum mechanics in the 1920s truly unlocked its potential by allowing these materials to be understood on the microscopic scale. This was essential in helping science pinpoint the characteristics of materials that were previously unobtainable and manipulate them more effectively, which is the case with spider silk.

The key mechanical property that makes spider silk so unusual is its toughness, which is a combination of its tensile strength and ductility. Spider silk’s high tensile strength allows the threads to withstand large amounts of pulling force, while its high ductility allows them to elongate without permanent damage when under such forces. In general, most materials must sacrifice one in favour of the other. Spider silk strikes a balance between both, which is why it’s so extraordinary!

Steel suffers because while it can withstand great amounts of force, it doesn’t fare well when those forces exceed its limits. Although steel and silk can withstand comparable forces, silk is more resilient in part because it is less dense. Spider silk also has the benefit of being a thread-like material. This is important because it gives spider silk the ability to take on many different forms, similar to what is seen in carbon fibre manufacturing today.

Spider silk owes its strength and resilience to its molecular structure, which is essentially a chain of amino acids. As the thread integrity experiences greater and greater forces, hydrogen atoms bound to the amino acids begin to break off from the threads. However, a portion of these hydrogen atoms will rebind, preventing it from instantly snapping. This is why spider silk is able to absorb great amounts of energy and technically never becomes slack. The silk threads quite literally “break slowly.”

 Another important property of spider silk is that its performance remains consistent through various environmental changes. For example, studies show that the threads retain their remarkable traits at temperatures up to 150°C. Additionally, its performance actually improves as temperature decreases, even at temperatures as low as −40°C. These are exceptionally valuable traits for a material to have considering the environmental changes it might experience, particularly in Canadian climates.

However, the mechanical properties of spider silk are only one component among a variety of other extraordinary traits. Research on bacterial growth atop silk threads conducted in 2012 at the University of Nottingham determined that spider silk has antimicrobial properties. Since it is also generally biocompatible with the human body, it has the potential to revolutionize medical practices. It may be particularly useful in regenerative medicine, which focuses on cell, tissue, muscle, organ, and nervous system reconstruction. For example, artificial nerve grafts are a way to revive the nerve signals by recombining the damaged nervous pathway with an artificial “bridge”.  Researchers in Germany successfully showed that spider silk was an exceptional artificial nerve graft material because it proficiently allows nerve cells and axons to migrate which is essential for neural regrowth.

Perhaps the most mind boggling fact of spider silk is that the spiders themselves use as many as 7 different kinds of silk to perform a variety of tasks. Most artificial silk research focuses on “dragline silk” which is used for web foundations and descending, whereas “wrapping silk” focuses on prey containment. Scientists at Dalhousie University along with collaborators from Toronto, Ottawa, and London Ontario, investigated the properties of wrapping silk in comparison to regular dragline silk. Despite wrapping silk having a different molecular structure than dragline silk, they determined it had comparable mechanical properties, continued to perform at increasingly extreme temperatures (~ −71°C ) and noticed it was even more biocompatible with our bodies.

With lucrative behaviour such as this, it’s no surprise that industry is actively pursuing production of artificial spider silk on a mass scale. In general, the goal is to understand and perfect the structure of the silk to be able to create synthetic versions of it, which is a vast improvement to some previously theorized solutions. Over the years, researchers have considered how to farm spiders for their silk, or even splice silk spinning glands into goats and silk worms! While these techniques showed moderate to no viability, the fact remains that synthetic silk is the least arduous path to mass production.  (Plus no one has to be liable for spider-goat chimeras.)

 Spider silk holds many secrets that could change the face of material science for the better while potentially spearheading advancements in a variety of other fields. Spider silk is an extremely versatile material, and is yet another example of nature providing humanity with a template to work with. Physics, chemistry, and biology: spider silk is the master of them all, and is a true testament to the meticulous perfection of evolution.

One thought on “Spider silk: The incredible biomaterial”