This summer, many North Americans will witness a celestial wonder – a total solar eclipse. The moon will completely cover the sun for two minutes and forty seconds. This rare sight has not been viewed from coast to coast in the United States since 1918. The relatively narrow path of totality (~120 km wide) starts in Oregon and ends in South Carolina. Because the path traverses many highly populated areas, it’s anticipated to be the most photographed and shared event in human history. 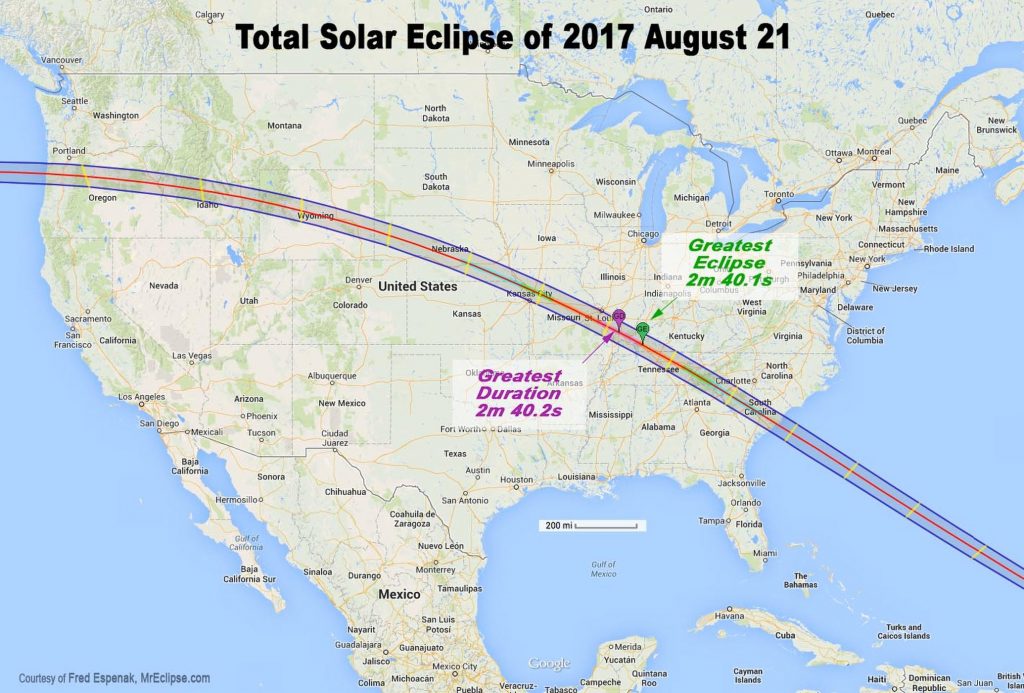 A map showing the 120-km-wide path of totality (locations where you can view the total solar eclipse) across the continental United States on August 21, 2017. Image and eclipse predictions by Fred Espenak, NASA’s GSFC.

The eclipse will occur on Monday, August 21, and will first be seen on the west coast just after 10:00 am, PDT. It will speed across the continental United States at 2,700 km/hour and arrive on the east coast 90 minutes later. The solar eclipse will last the longest, and result in the greatest duration of darkness, in Kentucky and Illinois.

To understand how solar eclipses work, it’s best to put things in perspective. Although the sun and the moon appear to be the same size from Earth, the sun’s diameter is 400 times that of the moon. But it’s also approximately 400 times further away – from Earth, this makes the sun and the moon look nearly the same size and allows the moon to perfectly eclipse the sun, which happens every 12â€“18 months. This may seem like a common occurrence, but because the Earth’s surface is 70% water, it’s quite rare to glimpse a total eclipse over land. 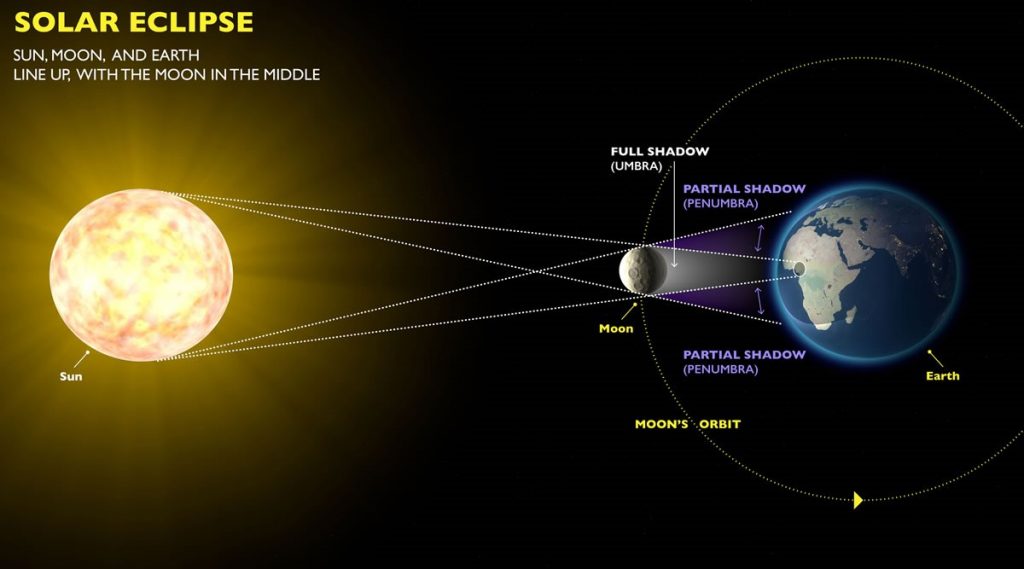 A solar eclipse occurs when the moon passes between the sun and the earth and the path of the moon either completely or partially obstructs the sun. Image courtesy of Exploratorium education.

If you’re in the narrow path of totality (locations where you can view the total solar eclipse), you’ll have a chance to see the sun’s atmosphere, called the corona, which will appear like a bright white orb against the darkness for a few minutes. If this is your first eclipse, there is one important thing you should adhere to – never stare directly at the sun. If you want to view the eclipse, you can buy solar eclipse glasses, which cost $5â€“30 and filter ultraviolet, visible and infrared light. For information on how to view the solar eclipse, including how to make your own sun funnel and solar viewing projector, check out these informational videos. 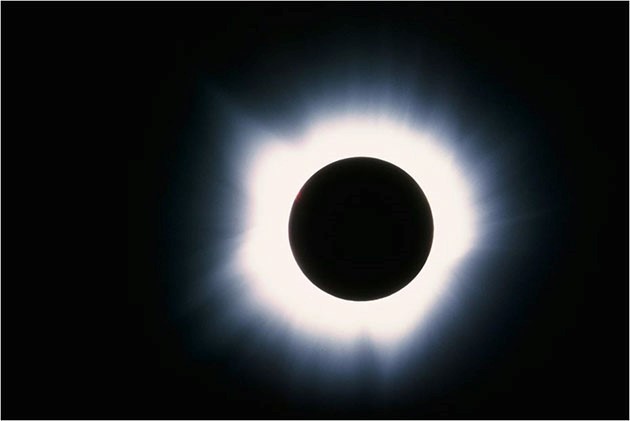 Don’t be disheartened if you don’t have a road trip planned to a location along the path of totality. The partial eclipse (when the moon covers a portion of the sun) can be viewed across North America and will last several hours depending on your location. NASA has an interactive website that can tell you exactly when to view the eclipse from any location in the world. And if it’s cloudy, don’t fret; you can connect to NASA’s live streaming event. 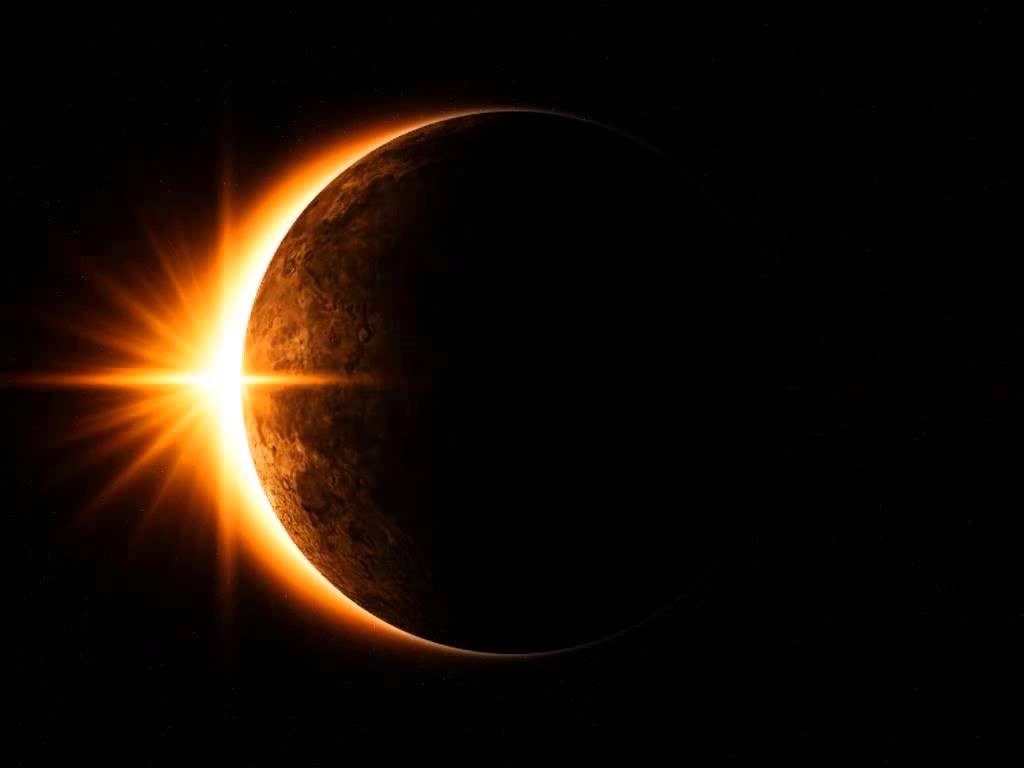 A multitude of airborne and ground observations will be made as the eclipse moves across the continental United States. One notable event is The Citizen Cate project, which will work with citizen scientists at 60 locations along the path of totality to document for the first time in high resolution how the sun’s corona changes over 90 minutes. This information will help scientists better understand the dynamics of the sun’s magnetic fields.

If you haven’t booked accommodation for the eclipse yet, you may want to start planning now. Many vacation rentals and campgrounds along the path of totality are already full, as people will flock from all over the world to see the event. If you want to avoid the crowds, consider hiking to a less visited National Park or wilderness area, where you’ll find less noise and light pollution during the eclipse.

If you want to join the crowds, events along the path include public astronomy sessions equipped with viewing stations, music festivals, cult gatherings and group weddings held in complete darkness. Whatever your interests, there’s probably an eclipse event for you. The website National Eclipse has a list of events in every state under the viewing path.