In September, the people’s climate march became New York City’s biggest political event in recent times. Why the need for a “people’s” march in the first place? Because of a feeling that something is wrong, not only in policy circles, but also in environmental circles – including the IPCC reports. 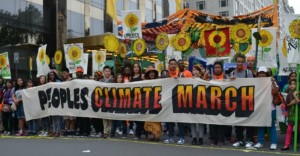 Bill McKibben, the man behind the recent 350.org movement and catalyst of this march, has written in the past few years that the three-decade- long strategy of the environmental movement has been partly a failure – and that it is time to reframe the debate. This summer, when promoting her book This Changes Everything: Capitalism vs the Climate, author and activist Naomi Klein underlined that the “alliance” of the last 20 years between the green movement and the industry was a mistake.

So it’s no surprise that this year’s IPCC reports have been received with a mix of interest in some blogging circles but indifference too, with even certain scientists criticizing the entire process as oriented too much towards governments and not to the science.

The tension between science and policy isn’t new, and has been well-described, for example in two companion pieces that received considerable attention approximately one year ago: “Twenty tips for interpreting scientific claims” published in Nature and “Top 20 things scientists need to know about policy-making,” which appeared in The Guardian.

Trouble is, if there is growing disillusionment that climate change science is not being presented as it should, or not being used as it should, those who favor the status quo will be sure to point to these disagreements to undermine the very scientific process that yields the evidence required to act.

On Friday October 31, the Intergovernmental Panel on Climate Change (IPCC) will release its Fifth Assessment Report (AR5), providing a comprehensive review of the current state of scientific knowledge relevant to climate change.

Ahead of the completion of the Synthesis Report, three Working Groups (WG) reports have already been made public. For each, summaries for policymakers have also been published. One relates to the physical sciences, another to impacts, adaptation and vulnerability, and finally one is related to mitigation of climate change.

Established by the United Nations Environment Programme (UNEP) and the World Meteorological Organization (WMO) in 1988, the IPCC provides “a clear scientific view on the current state of knowledge in climate change and its potential environmental and socio-economic impacts.” Its work is further described as “policy-relevant and yet policy-neutral, never policy-prescriptive.”

Reading through the final summaries, one could not accuse the scientists who participate in the activities of this intergovernmental body of interference in the political affairs of the 195 countries that are members of the IPCC. Quite the contrary! But questions might arise: who got the last word – the scientists or the government representatives?

Irrespective of the answer, the apparent scientific detachment is confounding, and brings us back to last week’s Science Borealis blog “Scientists are citizens, too” where Brian Owens tackled head-on the notion that those who produce scientific evidence and those who make political decision-making should stay out of each others’ business.

Overall, coverage of these developments and their implications has been scant in the blogosphere. But bloggers are not alone: last March, journalist Paul Raeburn wrote that during the final negotiations in Yokohama, before the IPCC Working Group II released its report, there were only five journalists from the Western world (all of them from the UK or the USA).

To bring about the sort of changes needed to reverse trends in climate change, politicians will need to be convinced of specific reforms that need to be made to existing laws and regulations. Yet, if I were in the shoes of a politician, reading through the Working Groups’ summaries would very likely leave me with no clue as to where to start, even if I were repeatedly told that “warming of the climate system is unequivocal.” Scientists need to add their voice and their interpretations to these reports. They need to work with all media but should anticipate that journalists will be curious to hear of dissent or frustration in the scientific community. Instead, those best prepared will bring forward concrete examples of potential policy changes that can follow from the scientific evidence. This is no small task. Nor is ascertaining the rate of climate change in past decades, centuries, or millennia!