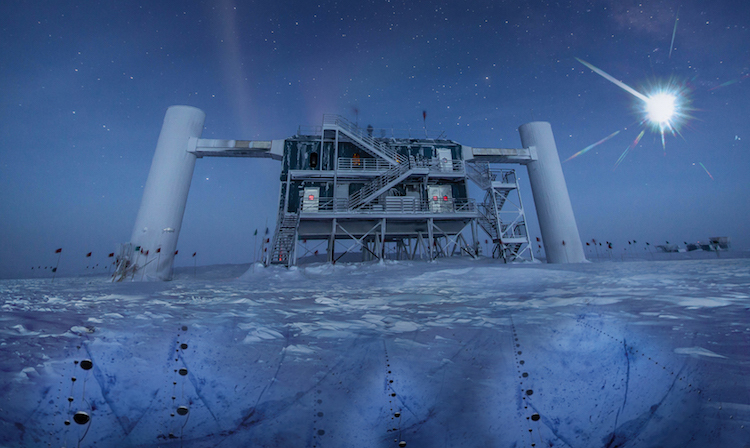 Scientists are hoping to boost the ability of the neutrino detection system, IceCube, by studying how light scatters in ice. Image: IceCube/NSF

Neutrinos are mysterious particles that hardly ever interact with matter. About 100 trillion pass through your body each second without you knowing any better. Despite their abundance, however, their laissez faire behavior makes them extremely difficult to study. Scientists have been working for decades to pinpoint the astrophysical sources of these particles, which are an essential ingredient of our universe.

A major breakthrough happened this past September, when for the second time in history a neutrino was traced back to a source from outside our solar system. It came from an immense galaxy four billion light years away with a supermassive black hole at its heart. The neutrino happened to be lined up on a perfect trajectory towards a detector planted within the Antarctica ice sheet, at the IceCube Neutrino Observatory near the South Pole. Only 20 to 30 neutrinos are detected here each year, but actually tracing them back to their origins requires an additional lucky combination of events in both time and space.

The detection last September yielded a wealth of information about how neutrinos are created during extreme astronomical events. But it also raised more questions than answers. For example, theoretically, the neutrino should have been accompanied by a substantial wave of x-rays, but we didn’t observe as many as expected. And a week after the neutrino was detected, a wave of extremely high-energy photons, called gamma rays, was emitted by the same black hole — what caused the delay? What other events create high-energy neutrinos? To unravel these mysteries, scientists must trace the origins of a lot more of these high-energy particles. To do so, they’ll need to understand something more much tangible than the elusive neutrinos themselves: ice.

The IceCube system involves more than 5,000 sensors that measure the angle of light that’s emitted when a neutrino strikes the bed of the Antarctic ice sheet, creating a subatomic particle called a muon. Scientists use the angle of light to calculate the direction from which the neutrino came. Image: IceCube Collaboration/NSF

The system that detected the high-energy neutrino last September is located in the Antarctic ice sheet for a very good reason. The fact that neutrinos almost never interact with matter makes them difficult to study directly. But, if a neutrino passes by an ice crystal at just the right angle, the charged interaction releases a subatomic particle called a muon. Because ice slows down light that travels through it, the muon is emitted at a speed greater than the surrounding light within the ice sheet. This causes a blue flash of light called Cherenkov radiation that can be detected by sensors. A muon can travel many kilometers through the ice, and Cherenkov radiation several hundred meters, until — hopefully — it reaches an IceCube sensor. If an image of Cherenkov radiation is detailed enough (described as angular resolution), the IceCube team can work backwards and attempt to calculate where in the sky the neutrino originally came from. 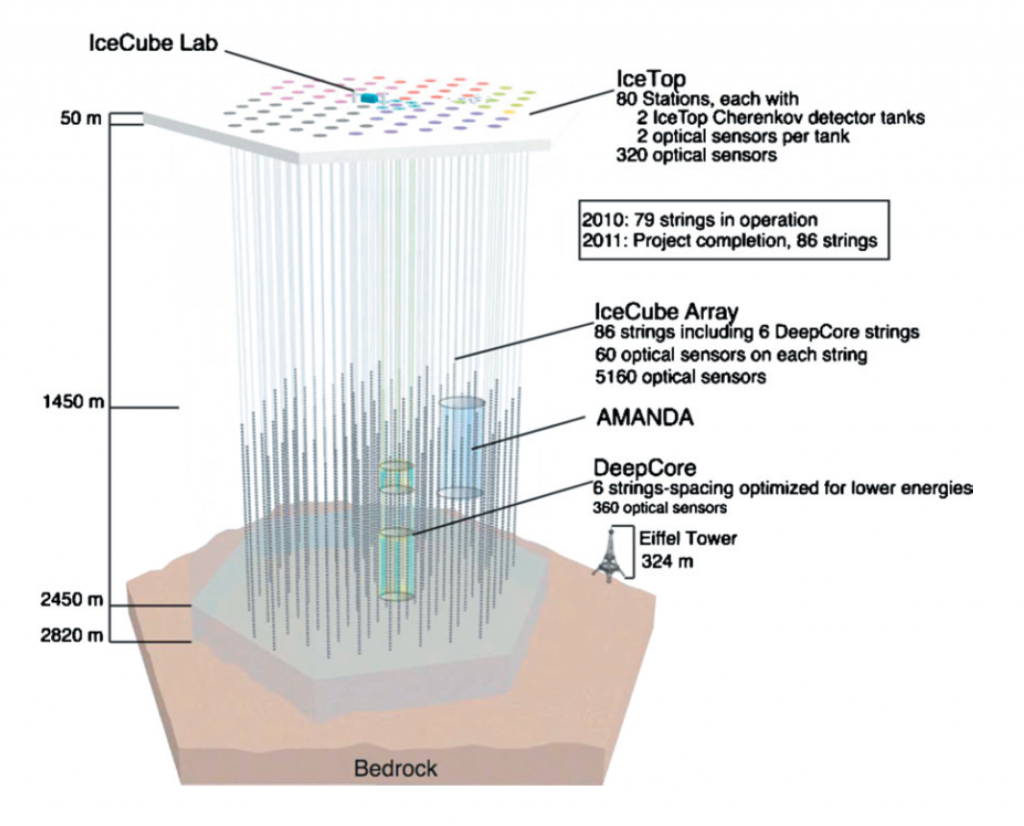 The IceCube system involves more than 5,000 sensors that measure the angle of light that’s emitted when a neutrino strikes the bed of the Antarctic ice sheet, creating a subatomic particle called a muon. Scientists use the angle of light to calculate the direction from which the neutrino came. AMANDA, the Antarctic Muon And Neutrino Detector Array, served as a proof-of-concept for IceCube and was turned off in May 2009. Image: Nasa–verve–IceCube Science Team – Francis Halzen, Department of Physics, University of Wisconsin, CC BY 3.0

Darren Grant of the University of Alberta, a leading IceCube scientist, says that the group is about to undertake new efforts to better understand the properties of ice. Their ultimate goal is “to have the most sensitive possible detector exploring the whole sky continuously.”

Yet, even Antarctica’s pristine ice sheet is not uniformly dense, meaning it may scatter light differently at varying depths. What’s more, the team must drill into the ice to slip the detectors — long, thin, string-like devices — into place. The drilling causes the surrounding ice to melt and then refreeze around the detectors. During this process, dissolved oxygen in the ice is unavoidably herded to the center of the hole as the water refreezes, forming a column of bubbles that scatters light. If the team can better understand how light scatters in this bubbly, imperfect ice at varying depths, they will be able to more accurately reconstruct the paths of neutrinos throughout the cosmos.

Kael Hansen, Director of the Wisconsin IceCube Particle Astrophysics Center, explains, “You can think about improvements in IceCube’s angular resolution like focusing an image. Our currently slightly blurry image of the neutrino sky will become sharper with better angular resolution.”

In this way, the IceCube team hopes to double the number of neutrinos they detect and trace. Grant describes neutrino detections as a “numbers game” — the more neutrinos you can detect, the more insights you can gain into the nature of the mysterious particles. The recalibrated IceCube system is slated to make its debut in late 2022 or early 2023, with the team expecting more precise measurements within a year.

And the search for neutrinos doesn’t stop there. Even as the IceCube collaboration works to improve its detector, a team at the University of Victoria is crafting experiments to study neutrinos in the darkness of the ocean. Like the Antarctic ice sheet, the vastness of oceans provides a useful natural laboratory setting for studying neutrinos. This medium has its own pros and cons: the darkness helps accentuate flashes of light, but the saltiness of the water can erode equipment.

Together, these immense bodies of water and ice on our world are the best bet for exploring how neutrinos from the far-flung corners of the universe are made. Although we’ve been diving into the ocean and drilling down into ice for years to probe the properties of neutrinos, our understanding of these particles is really only beginning to reach new depths.

One thought on “Is the Antarctica ice sheet the key to understanding neutrinos?”