If you drove through central British Columbia in the late summer of 2017, it would have been hard to miss the charred trees and blackened landscapes. B.C. experienced its worst wildfire season on record, with fires burning over 1.2 million hectares of forests throughout the province. In some places, interface fires spread right through communities, and over 65,000 people were evacuated from their homes. Rightfully, the extreme fire season saw wall-to-wall media coverage – and as usual, images of airplanes dropping bright red fire retardant were commonly featured.

Wildlandâ€“urban interface fires in B.C. are on the rise, as is the use of chemical fire retardants in the form of foams, gels, and powders. The 2017 fire season saw about 12 million litres of Phos-Chek dropped to suppress fires threatening communities in BC – surpassing the amounts used in any single season to date.

The type of fire retardant most commonly used in B.C. is a concentrated liquid called Phos-Chek LC95A-MV. It contains ammonium phosphate, corrosion inhibitors, thickening agents, and iron oxide, which gives it a bright red color and makes it visible when creating fire lines. The retardant is diluted in water to 15 per cent concentration and dropped by aircraft to aid ground crews and suppress wildfires that are threatening communities or infrastructure.

Generally, fire retardant isn’t dropped directly on fires, but rather on vegetation surrounding a fire to aid in its containment or help slow its spread. Fire retardant chemicals render trees, grasses, and vegetation non-flammable by giving off water vapour and altering the combustion process of cellulose in plants. Fire retardant is more effective than water alone because it acts as a long-term fire suppressant until heavy rains wash it away.

Fire retardants and the environment

Fire retardants contain many of the same ingredients found in common garden fertilizers. Although they are United States Department of Agriculture (USDA) and United States Forest Service (USFS) approved and considered safe for humans and the environment, studies have demonstrated adverse effects on salmon and trout. Salmon at the smolt stage are vulnerable to chemical fire retardant when it’s accidently dropped over their habitat, particularly in stagnant pools and river eddies where it is not quickly dispersed downstream.

Ash, mud, and debris resulting from fires can also affect waterways, but the long-term risks of fire retardant in sensitive aquatic and terrestrial habitats likely outweigh the other adverse effects of a fire event. Although Phos-Chek is sold as an environmentally beneficial product because it acts as a fertilizer after the fire, it also encourages the spread of invasive plants, which often capitalize on nutrient-rich environments.

Over the years, the Environmental Protection Agency, USDA, and USFS have conducted several independent reviews to test the toxicity of Phos-Chek to terrestrial and marine environments. These reviews confirm that exposure to Phos-Chek under certain conditions is toxic to aquatic species, and have prompted laws prohibiting fire retardant drops within 100 metres of any waterway. Reporting is also required for all off-target drops. No independent safety approval testing in Canada exists due to funding constraints; therefore, Canada follows USDA and USFS guidelines.

As a former BC wildfire fighter, I’ve been covered in fire retardant several times after gusty winds caused a missed drop by tankers. Although it caused some mild skin and eye irritation, it mostly felt like I’d been sprayed with soap. The retardant washed easily out of my clothes, but my leather boots continued to have a distinct red tinge for years.

A brief history of fire retardants 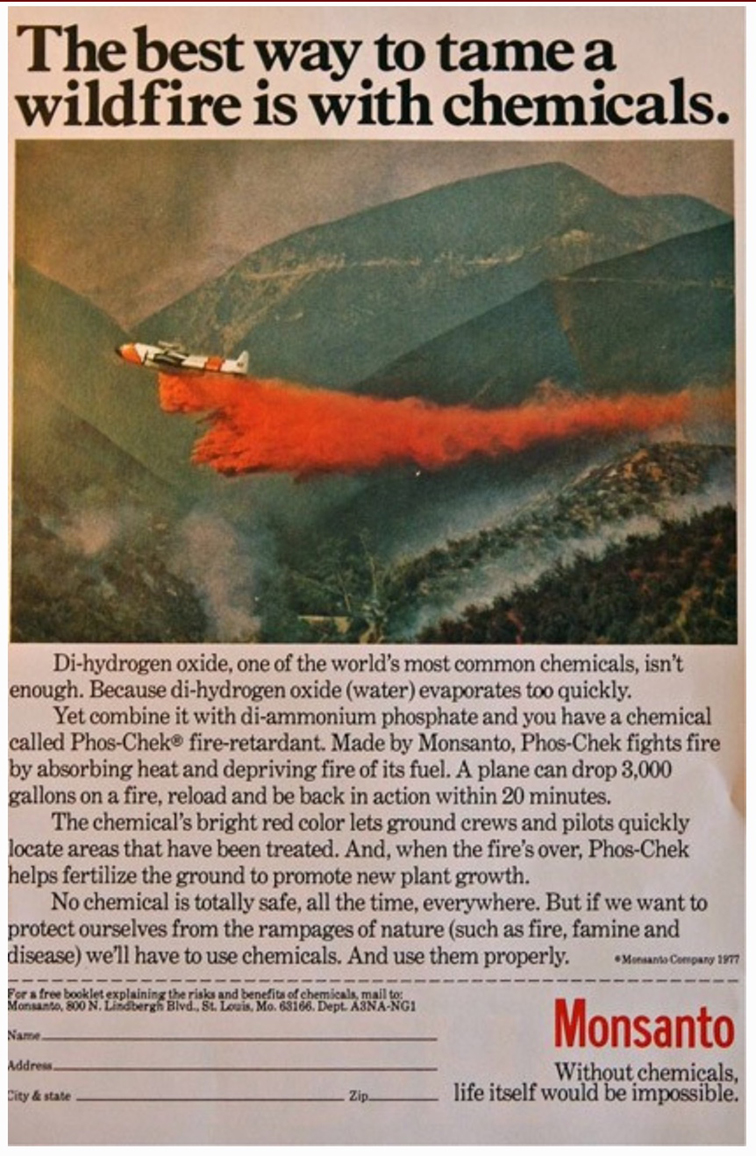 A 1977 advertisement for Phos-Chek fire retardant by Monsanto. Phos-Chek was first manufactured as a Monsanto product until it was sold to Solutia Inc. in 1998. Israel Chemicals Limited (ICL) acquired Phos-Chek in 2005. Public domain image. 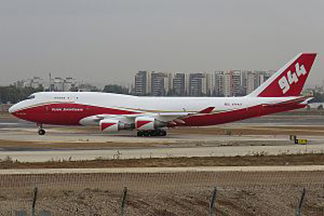 The amount of fire retardant dropped in a single aerial application depends on the size of the aircraft. Tanks range anywhere from 360 litres in a helicopter to 75,000 litres in a Boeing 747 SuperTanker. The SuperTanker made its first drops in the United States this year on the Sonoma and Thomas fires in California. The Thomas fire was the largest documented wildfire in California history, and during the 30 minutes the SuperTanker was deployed it made three fire retardant drops totalling 225,000 litres.

As aircraft capacity to carry fire retardant has increased, along with the size of fires and the length of fire seasons, we will likely see a continued increase in the use of chemical fire retardants. Phos-Chek is currently the only retardant approved by the USDA and USFS for aerial drops; although more environmentally sound alternatives are not currently marketed, changes could be made to protect endangered species and sensitive habitat by increasing the width of the margins adjacent to waterways where retardant cannot be dropped or only using water in sensitive habitat areas.

When asked about the risk of fire retardants to homeowners and their property, the answer is often something like this: “Better red than black.” If your home or property is affected by a retardant, it’s best to take precautions and remove it as soon as possible with detergent and water. And if you notice that retardant has been accidentally dropped near or in waterways, don’t hesitate to report it to fire authorities.