Washing can be hard on clothes. It removes dirt but can also remove tiny strands of clothing. These microfibres then go down the drain and into the environment. As the “micro” prefix suggests, each fibre is at most 5 mm long. Together, the impact of these fibres is anything but small – Canadian household laundry releases an estimated 67 tonnes of microfibres every year. The potential environmental and health effects of these microfibres are still unknown. Researchers have found these particles in surprising places like Great Lakes fish, the South Saskatchewan River, Arctic ice floes, and waters with no nearby communities, making them pervasive in our natural world.

How microfibres get from our clothes to our waterways

The first step to keeping microfibres out of natural ecosystems is figuring out how they get there in the first place. As it turns out, not much stands between microfibres in the washing machine and the aquatic environment. Wastewater treatment plants remove some microfibres, but many still make it into open waterways. Microfibers removed from the wastewater become part of the “sludge” produced by the treatment process. This product becomes fertilizer in some communities. When it rains, those fibres flow right back into waterways. 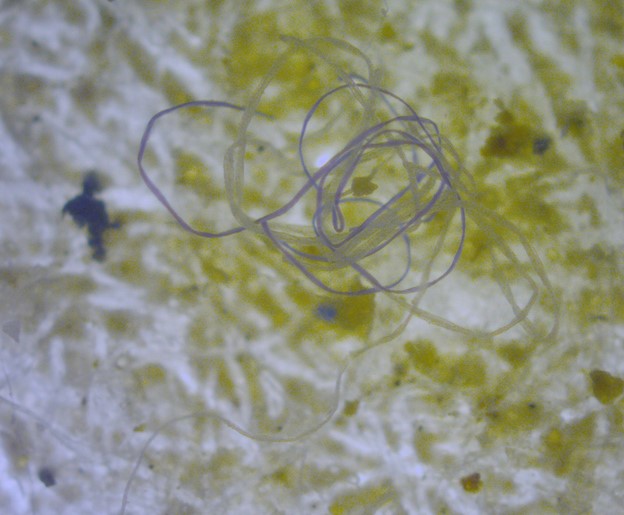 A plastic microfibre found in an aquatic environment. Image by M.Danny25 on Wikimedia Commons, CC BY-SA 4.0

Most microfibre research focuses on plastic microfibres from synthetic fabrics. However, current research indicates that natural microfibres may not be much better for the environment. Treatments such as dyeing cotton for blue jeans may change the way fibres break down. Furthermore, we simply don’t know how fibres like cotton and wool behave in and affect aquatic ecosystems.

There is variation among clothing materials, but most can be broadly categorized in two ways: the content and the construction. The content may be natural fibres (e.g. cotton and wool), synthetic fibres (e.g. nylon and acrylic), or a blend of both. Construction describes how fibres become yarn, and the yarn becomes fabric. A long continuous length of interlocked fibres is created by spinning shorter fibres together; these are predominantly natural yarns. Alternatively, synthetic yarn can be a long, single extruded filament. Options for making fabric include knit, woven and non-woven construction – think stretchy t-shirts, bedsheets and felt, respectively. Fabric is also mechanically or chemically treated to change its texture or colour or make it waterproof.

The Microfiber Partnership is a research initiative studying how different fabrics release microfibres. Researchers studied which fabrics shed the most microfibres, normalizing by weight of fabric washed, at the partnership’s specialized testing facility in Vancouver, BC. Among synthetic textiles, they found that polyesters demonstrated a wide range of shedding amounts, while nylon was almost always lower. This result may be a consequence of fibre use. Polyester has more varied applications, including fleece which has a fluffed up surface — making it cozy but primed for releasing microfibres — while nylon is usually filament yarn woven into outdoor gear designed to resist wear and tear. The natural fibre samples tested also had a wide range of shedding results. The researchers use characterization methods such as Fourier Transform Infrared Spectrometry (FTIR) to confirm the composition of the collected microfibres.

FTIR is a non-destructive material characterization technique involving shining infrared light at the sample and analyzing the wavelengths it reflects. The difference between the sent and returned wavelengths correlates with the chemical bonds in the fabric sample, as bonds between different atoms have different vibrational frequencies. Because each chemical bond has a unique effect on the reflected beam, all molecules have a “fingerprint” that identifies them.

Keeping microfibres out of waterways 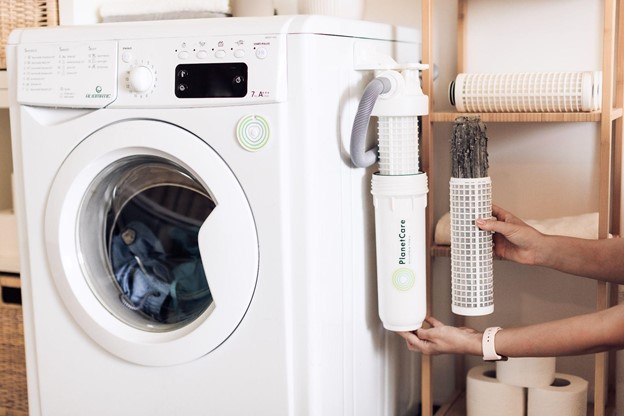 An example of an external washing machine lint filter, before and after being filled with lint. Filters like this catch microfibres coming off clothing before they enter the wastewater stream. Photo by PlanetCare on Unsplash

Microfibres are hard to remove from the environment; ideally, we should keep them out of it in the first place. A pilot study completed in Parry Sound, ON, investigated whether washing machine filters work outside the laboratory. Parry Sound has about 1000 households connected to their wastewater treatment plant, and 10% of the households installed filters. Measuring the microfibres here was more complicated than in the lab, as the lint collected also included things like hair, dust, foam and sequins. Researchers used a detergent solution to separate particles in the lint samples. This process allowed them to count microfibres, and other types of particles, under the microscope. About 40% fewer microfibres reached the plant after the filters’ installation, even though only 10% of homes received filters. This result indicates that filters work: in this case, at higher levels than anticipated. This result may be a consequence of the study creating awareness of microfibre pollution in the community. This awareness may have caused households without the filters to change their laundry practices, resulting in a reduction in microfibre shedding.

For laundry setups where filter installation isn’t possible, products like the CoraBall and GuppyFriend washing bag exist, although they may be less effective at trapping microfibres than a filter. Washing machine settings can also make a difference: cold water and shorter wash cycles reduce microfibre shedding, as does washing full but not overstuffed loads.

Reducing microfibre shedding is not just an issue of technology. It also requires effective implementation. Individuals can install external filters on their washing machines, but they aren’t cheap and require space around the machine. Changing washing habits (washing less often, with cold water, shorter cycles, full loads, and maybe a washing bag) is more accessible but less effective at reducing microfibre shedding. Policy changes affecting the textile and washing machine industries may be the large-scale solution. For example, the Ontario NDP is proposing a bill requiring new washing machines sold in the province to have built-in fibre filters, like lint traps in dryers.

Feature image: A close-up view of a fraying synthetic fabric. By Alan Levine on Flickr, CC BY 2.0 (cropped).