Last Friday was Marie Curie’s 147th birthday. To put it mildly, Marie Curie was an astonishing scientist, and certainly someone to look up to regardless of gender. 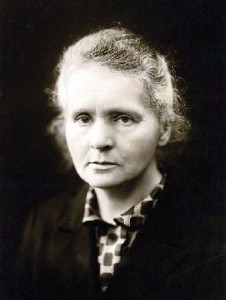 Marie Curie in approx. 1920 (image in public domain, via Wikipedia).

Marie Curie was the first woman in France to obtain a PhD in physics. In the same year (1903), she was the first woman to receive the Nobel Prize, securing the prize for physics jointly with her husband, Pierre Curie, and Antoine Henri Becquerel, for the discovery of and research into radioactivity. She followed this up by being the first person to win two Nobel Prizes, winning the chemistry Nobel in 1911 for the discoveries of radium and polonium. She also coined the term “radioactive.” Through her studies, Curie contributed manifestly to our understanding of nature, hypothesizing that “radioactivity is an atomic property of matter and can provide a means of seeking new elements.” As such, Curie was the first to suggest that the atom actually undergoes a transition to a new element through radioactive decay.

Despite these weighty contributions, Curie remained extremely modest and through her life focused her intensity on her work in the lab. Her autobiography drastically undersells her accomplishments: “I was born in Poland. I married Pierre Curie, and I have two daughters. I have done my work in France.”

Curie died on July 4th, 1934, due to aplastic anemia. This disease was believed to be linked to her exposure to radiation through the course of her research, which was performed before an understanding of the nature of radiation incorporated researcher safety measures.

Marie Curie stands out in history as an atomic heavyweight of physics and a colossus of chemistry. But her position as the default female role model for women in physics underscores two major societal issues:

1) It is disheartening that the one major role model for women in physics won her Nobel prizes a century ago. We forget that she isn’t the only woman to have won a Nobel Prize in physics (Maria Goeppert-Mayer shared the prize in 1963, and Dorothy Hodgkin’s 1964 prize in chemistry was for X-ray crystallography work, which is a very physics-based area of research), and there are plenty of women whose work is widely held to be of Nobel calibre but is as yet unrecognized by the committee. The Nobel Prize is also far from the only measure of recognition in the physical sciences, and naturally work done far before the prize was instituted is unrecognized. While Marie Curie certainly had a head start at becoming a cultural icon, there’s plenty of room for more than one iconographic female physicist (or astronomer).

She is also far from the only woman who studied physical science before the last half of the twentieth century. Women have been studying physics and astronomy since we’ve been studying the natural world. While female physicists are historically rare, rare is not the same as non-existent, and the idea that the women only started studying physics or astronomy in the twentieth century is demonstrably inaccurate. At the end of this post, we’ve compiled a list of women who worked (with or without pay) in either physics or astronomy. If you’re looking for new role models and a wider scope of the history of physics, their stories are a good place to start. There are also undoubtedly scores more women whose stories haven’t made it through the ages, who weren’t wealthy, Western, or lucky enough for someone to reference their work or keep their papers, and it’s unfortunate that their work is lost to time.

2) Even a slate of Marie Curies as role models for young female scientists is still a slate of science titans. It’s difficult for a young scientist – male or female – to aspire to their ranks: the majority of students don’t study physics with the notion that they will revolutionize science as we know it. However, it’s not only the extraordinary who have a place in physics: you don’t need to revolutionize a swath of science to justify your participation in the scientific community, regardless of gender. Given how women have been systematically pushed away from the scientific community for centuries, this is a doubly important sentiment for this group.

To that end, we need to make an effort to cultivate role models at all levels of influence. We need to trumpet the Curies, Noethers, Wus, and Hypatias throughout our curricula and culture, because they demonstrate that women can have their work and their names remembered for hundreds or thousands of years, and they can be remembered as making extremely important contributions to science. But we also need to amplify and commend the work of the accessible role models: the aunt who works in a condensed matter lab, the neighbour with a telescope in her backyard, the engineer from the national lab that comes to talk to high school classes, the grad student who’s profiled in the paper for her research, the teacher who encourages her female students to speak up in the class discussion. Having relatable women visible as scientists demystifies the profession to young girls: suddenly the image of “a female scientist” isn’t a dusty image from a century ago, and the prospect of becoming a scientist looks a little less daunting.

Women in senior positions as physicists and astronomers are still rare. Including full time faculty of all seniorities, and counting across physics and astronomy, chemistry, and others, in 2009 only 17.1% of math and physical science professors in Canada were women. This number skews strongly to younger women: only 10% of full professors in math and physical science were women. (All numbers from this NSERC report, with data up to 2009.) We need role models at all levels of the scientific hierarchy to extend a hand to help new students, new postdocs, and new faculty up the ladder, and to be a visible reminder that we don’t all need to be Marie Curie to have a role in modern physics (or astronomy).

There’s still some content up online from the Fifth Annual International Conference for Women in Physics, held earlier this year at Wilfred Laurier University. The main site is here, and the site also hosts a collection of first-hand stories from women in physics.

Both the Canadian Association of Physicists and the American Physical Society have committees focussing on women in physics. Relatedly, the Canadian Astronomical Society put out a report a few years ago with some numbers on women in astronomy in Canada, and there are some recent reports about the state of women in physics in America compiled by the American Institute of physics.

The Women in Astronomy blog has a lot of great writing about astronomy, science, and gender from a variety of writers.

This is not specifically about physics, but this post by our own Theresa Liao on parenting and gender in science is well worth a read.

The woman behind the man who revolutionized electricity and magnetism:

Next year, look for Ada Lovelace Day, “celebrating the achievements of women in science, technology, engineering and maths.”

On gender bias in the academy.

A Roughly Chronological Incomplete List of Notable Historical Women in Physics and Astronomy:

This list is comprised mostly active scientists who did original research, though we’ve included some women contributed to science in other ways, including salonists, teachers, translators, and women who wrote popularist texts on the science of the day. This is an unfortunately Western-centric list, as information about historical non-Western female astronomers and physicists is scarce. Stephanne wrote about compiling this list on her own blog.