Music is a form of art enjoyed by many, including myself. Throughout my life, I have used music as a form of entertainment, as a stress reliever, and as a mood booster. And whenever my favourite artists announced a concert in my hometown, I would buy tickets the very second they went on sale. As I got older, I began to wonder why I, and so many others, were so inclined to purchase these concert tickets, even if they were expensive. Of course, there is the element of seeing an artist you admire in the flesh—but is there more to it? Does live music affect us differently than a recording?

How does music affect the human body? 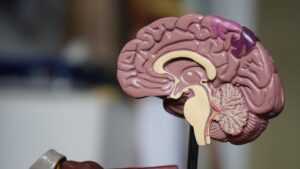 A model of a cross-section of the brain. The brainstem – the white bottom piece – is where vibrations are perceived as music in the brain. Photo by Robina Weermeijer on Unsplash.

Music elicits both psychological responses and physiological responses. Sound travels from a source, through the air, into your ear canal, and to the eardrum. The eardrum receives vibrations from the sound, and these vibrations are transmitted into electrical signals that go through the auditory nerve and to the brainstem, at the bottom of the brain. In the brainstem, these vibrations become what we perceive as music. Music is often described as exercise for your brain because of the extensive computing that goes on when the sound finally reaches the brain.

Music can suppress or promote the release of neurotransmitters, chemical signals released by the brain. Slow, relaxing music reduces the amount of noradrenaline released and this can help you fall asleep. Loud and rhythmic music causes a release of adrenaline, which promotes wakefulness. The pleasure we experience when listening to music also stimulates the release of dopamine, a neurotransmitter involved in the brain’s reward system. A study by Canadian researchers found that dopamine levels were 9% higher when volunteers in the study were listening to music they enjoyed. So, music promotes a “feel-good” state by releasing dopamine and activating the brain’s reward system.

Psychologically, music can provide many benefits, like reducing feelings of sadness, improving cognitive abilities, decreasing stress levels, and improving performance when under pressure. Some of the physiological benefits of music include improved exercise endurance, pain reduction, improved function of the blood vessels, and decreased blood pressure.

Canadian researchers from McMaster University conducted a study to discover what inspires people to attend concerts. Previous research has determined that people probably enjoy concerts because they like the social experience of listening to music with others, and because they like being in the same physical space as the artist. Concerts are idiosyncratic, meaning that there is a certain unpredictability to the performance and the way the music will play out that can depend on the engagement of the audience, whereas with recorded music, the song will unfold predictably every time. Given this information, the researchers sought to find out whether factors specific to live performances contribute to the overall concert experience. 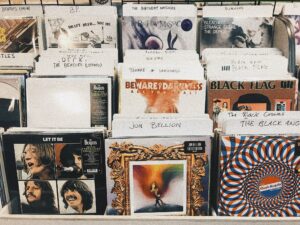 Vinyl albums of different rock artists at a record shop. Image by Natalie Cardona on Unsplash.

The research team recruited subjects to attend either a live album release concert by popular Canadian rock artist Ian Fletcher Thornley, or a concert where the recorded versions of the same songs were played without the presence of the artist. By doing this, the researchers were able to control for the social aspect by keeping the setting the same and were able to see how aspects of live music affect the subjects. They also observed differences between self-reported fans of the artist and neutral listeners. Here, the researchers used head movement responses as a way to determine how subjects were feeling throughout the concert. They also used head movements to look at entrainment – how often subjects synchronize their movements to the rhythm of the music.

This study showed that both fans and neutral subjects had more vigorous head movements in the live concert, which suggests more arousal, anticipation, and connection with the artist and the music. Fans of the artist also showed better entrainment and more vigorous head movements compared to neutral listeners. This resonates with my experience, in which I have always felt more engaged at a concert performed by an artist I love.

Of the eight songs played at the concert, the last one was a cover of a popular song, and throughout the song, fans exhibited more entrainment when it was played live, suggesting that familiar music affects fans of the artist to a greater extent than new music. In my experience, the most popular and familiar songs have always been the ones that left the greatest impression on me at any concert. So, put together, these results suggest that live music does lead to more listener engagement and enjoyment, especially for fans of the artist.

Other scientists have found that attending concerts may contribute to your overall health by reducing stress hormones, and the cultural engagement may also protect people from cognitive decline caused by aging.

Considering the effects of live performances, and the psychological and physical effects of music, it is easier to understand why I, and others, are so inclined to buy concert tickets and experience their favourite artists’ music live. Concerts are not only a social event where you can connect with other fans, but they can also provide health benefits and lead to more intense, pleasurable feelings, making for an overall memorable experience worth every penny.

One thought on “Music and the human body: the effects of live performances”