Man-made pollution is one of the biggest threats we face — microplastics everywhere, contaminated drinking water, plastic garbage floating on the oceans. Data show that pollution is already causing deaths, and new evidence suggests that it may be worse than previously assumed.

In 2016, the World Health Organization (WHO) estimated that outdoor air pollution (called ambient pollution) caused 4.2 million premature deaths – early, non-accident related mortality that can be linked to pollution. A recent study by Canadian and American researchers demonstrates that the real number may be 1.5 million higher than that.

How is it possible that we missed that many premature deaths?

Deaths by air pollution are the direct result of exposure to fine particulate air pollution, or PM2.5. PM2.5 are tiny airborne particles, two microns or less in diameter, composed of chemicals like sulphur dioxide, nitrogen oxides, ammonia, carbon monoxide, and other volatile compounds. They cause the haze that you sometimes see in the air, most often during warm, windless days. The biggest emitters of these particles are gasoline or diesel fuel sources — think cars, generators, factories, and heaters.

That’s not to say that all sources of PM2.5 are manmade. There are smaller amounts of these particles found in dust, dirt, pollen, and wildfire smoke. But the predominant source is gasoline and diesel use. It is also important to note that PM2.5 levels are not constant. They don’t always stay at peak amounts, but ebb and flow due to the time of year, air temperature, location, day of the week, and weather conditions. However, that does not mean they ever drop below dangerous levels. 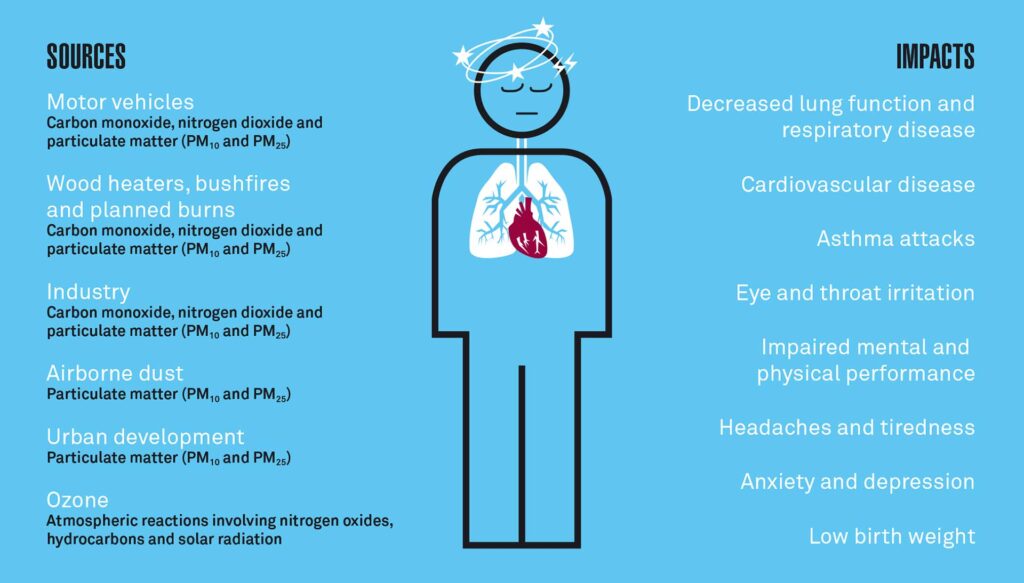 A handy infographic outlining some of the effects of PM2.5 and its sources. Image: Office of the Commissioner for Sustainability and the Environment Australia, CC-by-3.0.

Because PM2.5 particles are so small and long lasting, they can easily pass into your lungs and diffuse directly into your bloodstream. That is where the problems start.

Not everyone is equally affected by PM2.5. We are all at risk of damage, but children, the elderly, and those with pre-existing lung and heart conditions are the most likely to suffer ill effects or even death due to PM2.5 exposure.

The video below by UNICEF takes a look at PM2.5 transport and its effects on children’s health. It is a great illustration of the more harmful long- and short-term effects of exposure to air pollution.

The WHO released new guidelines in September 2021, suggesting that the annual average outdoor concentration should not exceed 5 microns per cubic metre (μg/m3) — a significant decrease from their previous guideline of 10 μg/m3. Some countries have set their own limits: the US Environmental Protection Agency recommends 12 μg/m3 and the Canadian Government simply states that “[t]he focus should be on reducing indoor sources over which homeowners and residents have some degree of control” without giving hard and fast guidelines. Previous exposure ranges, following the previous WHO guidelines, were established in 1987, but the government now prefers that individuals focus on decreasing indoor PM2.5 concentrations.

Canada is generally on the lower end of PM2.5 levels for a developed country. Low PM2.5 levels were not thought to be a significant cause of premature deaths. However, the recent study by the Canadian and American researchers determined that even low levels of fine particles can cause significant increases in mortality. By not looking at them until now, we missed approximately 1.5 million additional deaths.

While the 5 μg/m3 goal of the WHO may not be ideal (we do not know at what level mortality risk is completely removed), it is a significant step in the right direction. As the lead author on the paper states, “One take away is that the global health benefits of meeting the new WHO guideline are likely much larger than previously assumed.”

Getting PM2.5 levels closer to safe levels will take a global effort, as air pollutants know no political boundaries. A 2019 study found that 33% of Canada’s PM2.5 pollutants originate in the US. All national governments will have to pressure corporations – the biggest emitters of these pollutants – into sticking to the WHO guidelines. Putting pressure on your member of parliament (MP) is the quickest way to get your voice heard. Here is a handy list for finding out the name of your MP.

What can you do to decrease your personal risk? You have the most control over your indoor PM2.5 exposure. So, use the stovetop fan when cooking, do not smoke (or at least, do not smoke indoors), and limit the use of candles or oil lamps. During the coldest part of the Canadian year, it is important to remember that fireplaces and fuel-burning space heaters are significant sources of confined PM2.5 levels — use them sparingly.

Significant concerted steps are needed to improve the world’s outdoor air quality. There are many obstacles to overcome but the reward is great — a healthier human population. If you’re interested in learning more about the PM2.5 levels where you live, you can consult the Air Quality Index.

Feature image: Industrialization is a major contributor to air pollution levels with factories and industrial complexes contributing more than any other source to atmospheric fine particle levels. Free to use, no attribution required.