In recent years, many areas of the geosciences, including palaeontology, have adopted cutting edge technology and techniques – sometimes in unexpected ways. There are lots of potential applications! Today I’m describing three examples: mapping fossil sites; obtaining soft tissue information from fossils; and armchair geoscience. The first two illustrate specialist applications, but the apps in the last example can be used by anyone.

Geology and maps go hand in hand; it’s hard to imagine one without the other. William “Strata” Smith, the founder of English geology, is generally credited with creating the world’s first large-scale geological map (it’s known as “The Map that Changed the World”), by applying the principles of stratigraphy. In the very early days, geological mapping techniques were decidedly low-tech – basically sketching rock outcrops in field notebooks, describing their characteristics, and interpolating their distribution (imagining how the visible rocks above-ground connected below the surface). As time progressed, techniques became more precise, incorporating surveying tools familiar to any geology student today, like the compass-clinometer. In the 21st century, geoscientists have access to advanced tools such as digital photographs; remote sensing technology such as light detection and ranging (LiDAR), ground penetrating radar (GPR), and the geographic information system (GIS); precise location technology such as the global positioning system (GPS); and drones.

These high-tech tools have recently been used in Italy, Canada, and Australia to find fossils and map fossil sites. Italian researchers found the bones of a fossil sea cow (sirenian) under a sunflower field in Tuscany, Italy using GPR. Researchers from the Royal Tyrrell Museum in Drumheller, Alberta, Canada, are using high-precision GPS technology to map fossil sites in Dinosaur Provincial Park, and drones to map dinosaur beds as part of a large-scale digital mapping project. On the Dampier Peninsula, Western Australia, handheld photography/photogrammetry, aerial photography/photogrammetry, and LiDAR imaging techniques were used to map dinosaur tracks in the Lower Cretaceous Broome Sandstone. 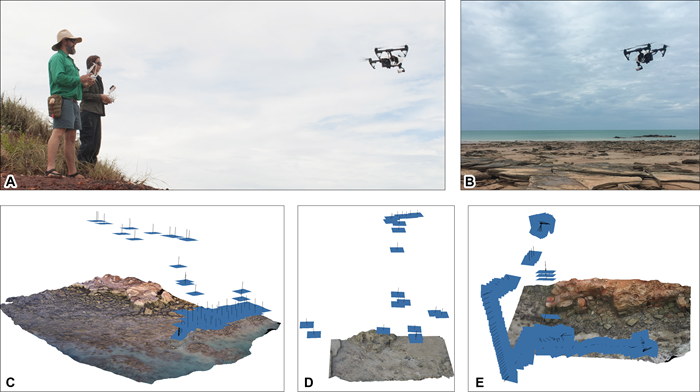 When people think of dinosaur fossils, they often picture dusty skeletons in a museum display, sometimes still partly encased in rock. However, palaeontologists are discovering new and exciting things about dinosaur soft tissues all the time, using advanced non-destructive technology. For example, researchers have discovered collagen (i.e., preserved protein) in the fossilized rib of a 195-million-year-old dinosaur, Lufengosaurus, using synchrotron radiation-based Fourier transform infrared (SR-FTIR) microspectroscopy. This technique uses an infrared beam to “excite” the molecules of a sample, and converts its characteristic vibrational energy into a chemical map using a mathematical process.

But what about soft tissues found outside of the bones? Well, researchers from China and the USA used laser-stimulated fluorescence to obtain high-definition images of soft tissues and to reconstruct the body outline of Anchiornis, a bird-like dinosaur. The images revealed details about the creature’s skin and feathers.

So, say you’re interested in geoscience, but for whatever reason you can’t or don’t want to go out into the field yourself. Luckily, you can bring the field to you! TouchTerrain, developed by Iowa State University’s GeoFabLab, is an open-source and free-for-private-use web application that allows anyone with a 3D printer to print terrain models of any location on the planet, including the ocean floor. You can examine the geological features you printed by holding them in your hand and looking at them from every possible angle. It’s a great educational tool!

What if you’re flying, driving, or hiking and you see something cool or just want to know more about the geology of the area you’re travelling through? Then Flyover Country is the app for you! This app is part of the US National Science Foundation’s EarthCube initiative and was developed by researchers at the University of Minnesota. It uses your cell phone’s GPS system (which works even in airplane mode), allowing you to get information about the local geological features (including dinosaur sites!) based on your current coordinates. In an interview for Co.Design, one of the app’s creators said he wants to add augmented reality to the app, so that users can see the data overlaid on what they see in the real world. 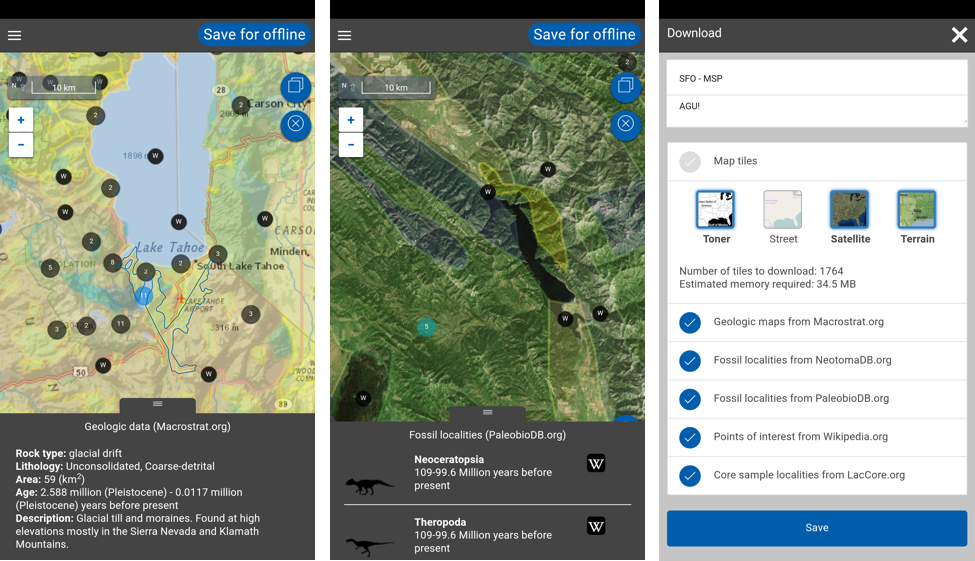 Sample screen images from the Flyover Country app (from http://fc.umn.edu/).

You can see from these three examples that there are many cool ways that technology and geoscience intersect, whether you’re a specialist or just casually interested in the subject. And these only scratch the surface of what’s out there. New technologies are being developed all the time, so who knows what’s on the horizon! Just imagine the possibilities…