Science-art, or sciart, is used to illustrate scientific ideas and concepts. In most cases, the idea behind sciart is straightforward â€“ draw or illustrate what you see. Of course it’s not really that simple because a great deal of research goes into these images â€“ more than the casual observer realizes! But when it comes to palaeontology, it’s even more complicated because the subjects are long extinct.

Palaeoart, a subset of sciart, is used to depict these long-gone creatures. It aims to catch people’s eyes, while maintaining the accuracy of the science. Palaeoartists capture the imagination of kids and adults alike by reconstructing extinct animals in ways that they can literally only imagine. It is science with a bit of artistic license and creativity thrown in for good measure.

Unfortunately, palaeoart is often seen as being more a product of the artist’s impression than actually conveying science, although palaeontologists would argue otherwise. So, what does it take to create a credible illustration of a prehistoric animal?

Typically, scientists don’t have the entire animal to work with â€“ usually there are only a few bones (rarely a complete skeleton), or an outline of soft tissue, or some nearly indecipherable evidence of colour. How does an artist deal with these issues? How much science actually goes into their final product? It turns out, quite a lot.

Most palaeoartists are not palaeontologists. Take Danielle Dufault, an award-winning Canadian palaeoartist who is employed by the Royal Ontario Museum (ROM). She illustrates the ROM’s papers and finds. Danielle grew up fascinated by science and the natural world and went on to do a degree in Technical and Scientific Illustration at Sheridan College, where her interest in palaeontology grew. She now works side-by-side with Dr. David Evans, curator in Vertebrate Palaeontology at the ROM.

A few years ago, Dr. Evans and his team found a new ceratopsian (horned dinosaur) skeleton in southern Alberta that they called Wendiceratops. It was Danielle’s job to create an illustration of this newly discovered creature.

Wendiceratops, an herbivorous ceratopsian, is a great example of what it takes to go from a collection of bones to a full life-like reconstruction. The skeleton was incomplete, meaning that several bones had to be approximated. Dr. Evans told Danielle which animals Wendiceratops was closely related to, and left the rest to her. “It’s up to me to educate myself on all the closest relatives, so I have to familiarize myself with papers that have been published”, Danielle said. After several exchanges with David and her lab mates, she was able to reconstruct the frill on the back of Wendiceratops’ head, a unique and significant feature of these horned dinosaurs.

Palaeoart isn’t just about colourful life reconstructions. Artists are often employed to make figures for scientific publications as well. Academic publications usually employ black and white outline drawings or stippled illustrations to show details. These can be as effective as colourful artwork to get a point across. 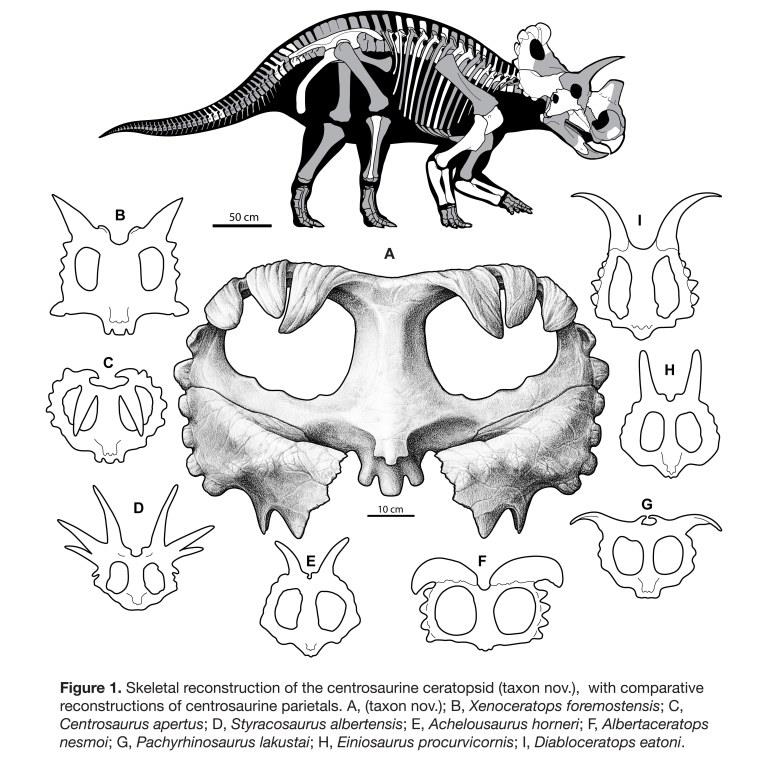 Skeletal reconstruction and frill diagram from Evans and Ryan 2015. Image by Danielle Dufault, used with permission.

Going from a scientific illustration of the bones to a life reconstruction of the animal in its natural environment requires even more research. According to Danielle, “the foundation of a good life reconstruction is a solid understanding of where it lived”, and this includes all aspects of the environment such as plants, animals, topography, and geography to name a few. It’s also important to consider how it lived, and what ecological niche it occupied. Was it a top predator? Maybe it lived in burrows? Was it nocturnal? Understanding all of these factors is essential for a good life reconstruction.

Another common issue to solve in reconstructions is scale â€“ how do you show how large or small the animal was? Some artists use familiar animals, such as cats or giraffes, for comparison to show the relative size, while others show them next to large trees or other foliage. 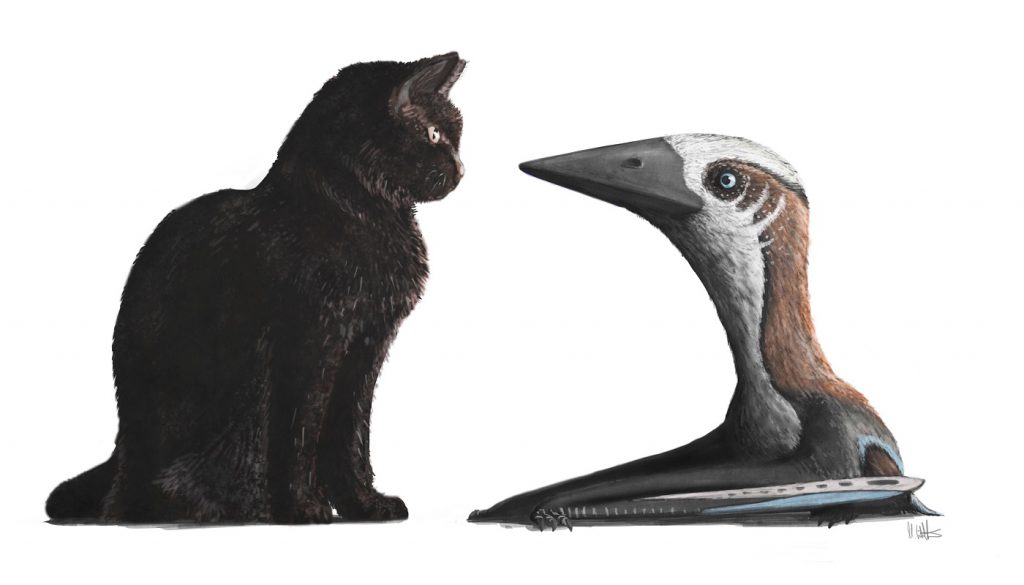 A good example of an environmental reconstruction is a recently described small pterosaur (flying reptile) from Hornby Island, BC, illustrated by British palaeontologist and palaeoartist Mark Witton. As a pterosaur specialist and co-author on the paper, the reconstruction of the animal was relatively easy for him but he still had to figure out the environmental reconstruction. Unfortunately, the area in question is problematic, and Mark says it’s “a case study for dealing with a glut of unknown data.”

The animal was found in marine deposits, but we know pterosaurs were terrestrial, so he opted to reconstruct the animal on the coast. The ammonite shells found in the same geological formation show that the location is near the coast, and the birds that appear in the environmental reconstruction are based on fossils also found in the same formation. Since there is little palaeobotanical evidence from this area, Mark chose plants based on other similar environments from the Late Cretaceous. 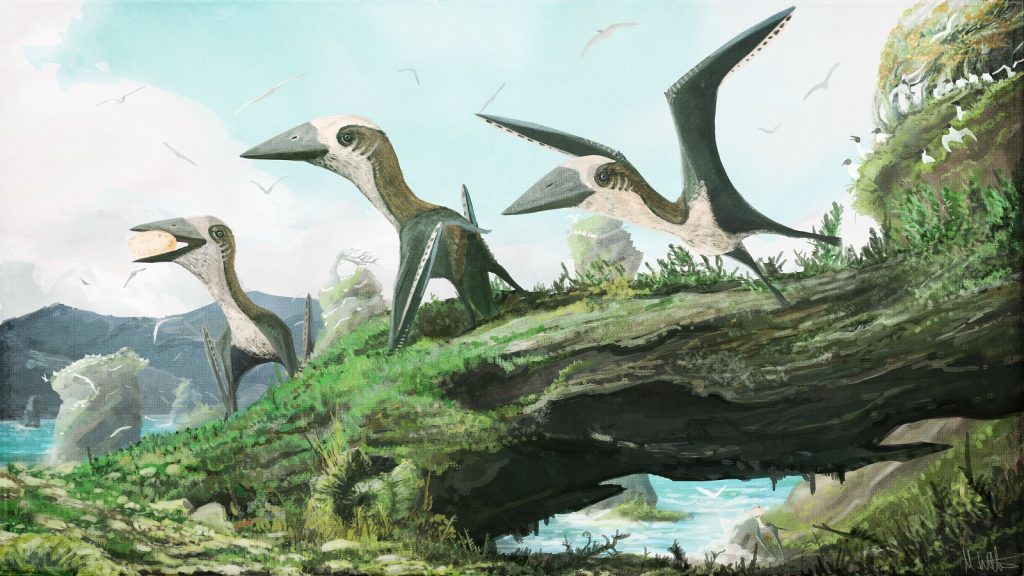 Life and environmental reconstruction of the Hornby Island pterosaur. Image by Mark Witton, used with permission.

For Wendiceratops, Danielle focused on making a detailed reconstruction of the head. For this, living animals are extremely helpful. “Of course, extant animals are what inspire the outer appearance of the animals I draw, so if we can think of other animals which may have filled similar ecological niches, they may indeed be ideal inspiration for a reconstruction. From feather patterns, scale shapes and colours, eyes, and all other soft tissues lost to the passage of time, we can find so much to compare to today[‘s wildlife] to make an animal look believable.”

Draft sketches of Wendiceratops. Note in particular the difference in the horns in each version, modified after discussions with the authors and reading the literature. Image by Danielle Dufault, used with permission.

Danielle looked for a “colour combination that occurs naturally in scaly animals today”, using a frilled lizard as a guide for the colour scheme. The size and shape of scales comes from fossilized skin impressions from other closely related ceratopsians, while the horn colour was based on modern bovids (cloven-hoofed, ruminant mammals) and chameleons. 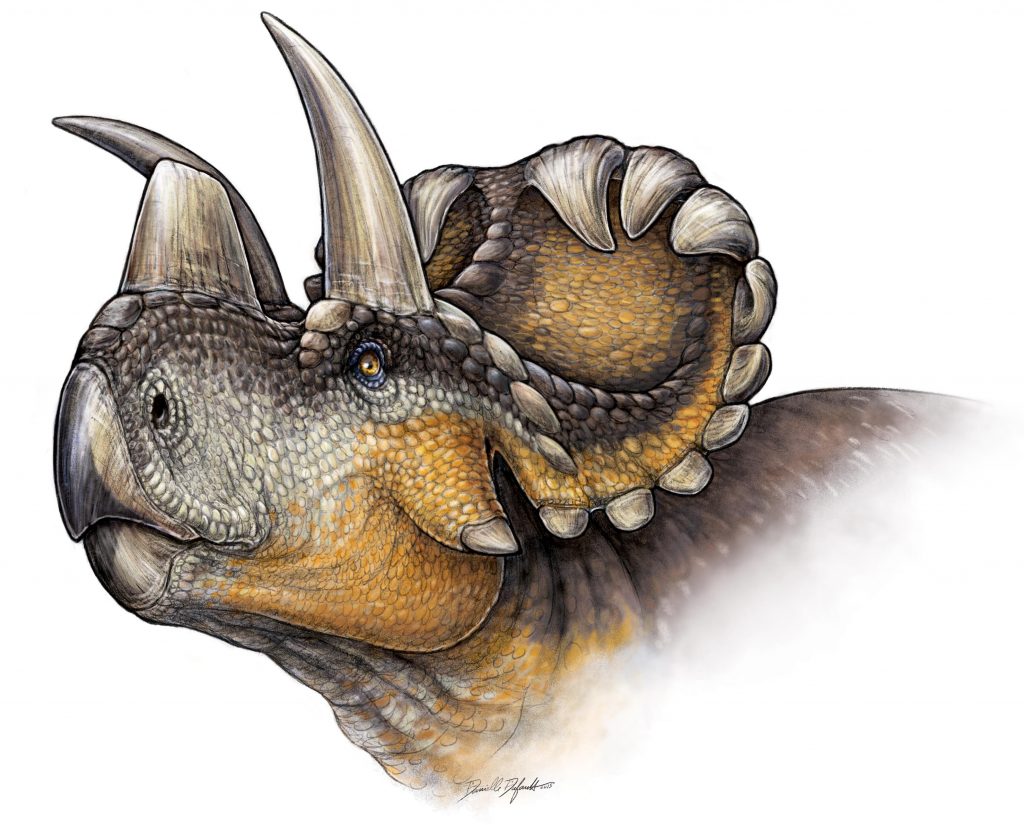 Life reconstruction of Wendiceratops in Evans and Ryan (2015). Image by Danielle Dufault, used with permission.

Palaeoartists also make 3D reconstructions. The most accurate reconstruction of a dinosaur, a sculpture of a Psittacosaurus made by British palaeoartist Bob Nicholls, is a prime example. Bob enjoys doing 3D models because he gets to know the animal better. All aspects of its anatomy must be known and reconstructed in detail since the final product will be viewed from every angle. It also requires a “broad knowledge of, and experience with, different specialist materials.” Bob estimates around 30 different materials were used in making this model, including everything from hazardous fibreglass laminate and resin, to basic chicken wire and tweezers. He even used a power saw! 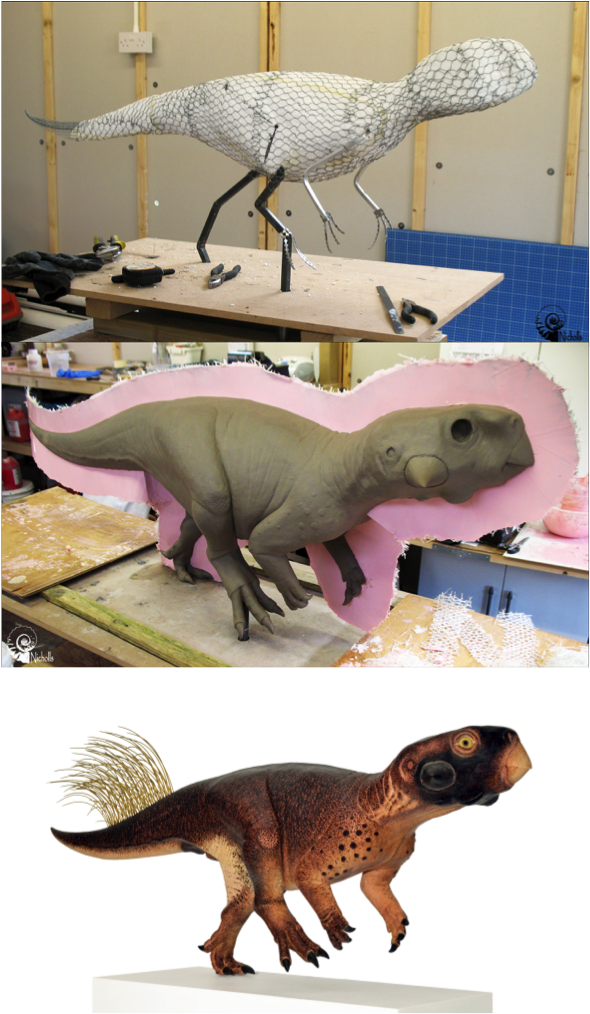 Different stages of model making of Psittacosaurus, including the final version. Images provided by Bob Nicholls, used with permission.

While palaeoart may be a fan favourite for people wanting to see one dinosaur fighting another, it’s more than just fantasy. It’s about trying to recreate the past in the most accurate way possible, and it’s this collaboration between palaeontologists and artists that makes the past more accessible to everyone.

4 thoughts on “Palaeoart: Drawing from the past”