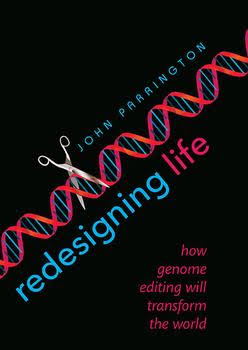 “Imagine if living things were as easy to modify as a computer Word file.” So begins John Parrington’s journey through the recent history and present-day pursuits of genetic modification in Redesigning Life. Beginning with its roots in conventional breeding and working right up to the cutting edge fields of optogenetics, gene editing, and synthetic biology, the book is accessible to those with some undergraduate-level genetics, or secondary school biology and a keen interest in the subject. This audience will be well served by a book whose stated goal is to educate the public so that a proper debate can take place over the acceptable uses of genome editing.

Parrington doesn’t shy away from the various ethical concerns inherent in this field. While he points out, for example, that many fears surrounding transgenic foods are the result of sensational media coverage, he also discusses the very real concerns relating to issues such as multinational companies asserting intellectual property rights over living organisms, and the potential problems of antibiotic resistance genes used in genetically modified organisms (GMOs). Conversely, he discusses the lives that have been improved with inventions such as vitamin A-enriched “golden rice”, which has saved many children from blindness and death due to vitamin deficiencies, and dairy cattle that have been engineered to lack horns, so they can be spared the excruciating process of having their horn buds burned off with a hot iron as calves. These are compelling examples of genetic modification doing good in the world.

This is Parrington’s approach throughout the book: both the positive and negative potential consequences of emerging technologies are discussed. Particular attention is paid to the pain and suffering of the many genetically modified animals used as test subjects and models for disease. This cost is weighed against the fact that life-saving research could not go ahead without these sacrifices. No conclusions are drawn, and Parrington’s sprawling final chapter, devoted solely to ethics, is meandering and unfocussed, perhaps reflecting the myriad quagmires to be negotiated.

The applications of the fast moving, emerging technologies covered in Redesigning Life will astound even those with some familiarity with modern genetics.

Weaving in entertaining and surprising stories of the scientists involved, Parrington frequently brings the story back to a human level and avoids getting too bogged down in technical details. We learn that Gregor Mendel, of pea-breeding fame, originally worked with mice, until a bishop chastised him for not only encouraging rodent sex but watching it. Mendel later commented that it was lucky that the bishop “did not understand that plants also had sex!” We’re told that Antonie van Leeuwenhoek, known as the father of microscopy, was fond of using himself as a test subject. At one point, he tied a piece of stocking containing one male and two female lice to his leg and left it for 25 days to measure their reproductive capacity. Somewhat horrifyingly, he determined that two breeding females could produce 10,000 young in the space of eight weeks.

The applications of the fast moving, emerging technologies covered in Redesigning Life will astound even those with some familiarity with modern genetics. The new field of optogenetics, for example, uses light-sensitive proteins such as opsins to trigger changes in genetically modified neurons in the brain when light is shone upon them. In a useful, yet nevertheless disturbing proof-of-concept experiment, scientists created mind-controlled mice, which, at the flick of a switch, can be made to “run in circles, like a remote-controlled toy.” More recently, sound waves and magnetic fields have been used to trigger these reactions less invasively. This technique shows potential for the treatment of depression and epilepsy.

While the book touches on agriculture, its main preoccupation is medical research.

The book goes into some detail about CRISPR/CAS9 gene editing, a process that has the potential to transform genetic modification practices. This system is efficient, precise, broadly applicable to a range of cell types and organisms, and shortens the research timeline considerably compared to traditional methods of creating GMOs. It underpins most of the other technologies discussed in the book, and its applications seem to be expanding daily. In the words of one of its developers, Jennifer Doudna, “Most of the public does not appreciate what is coming.” These words could be applied to almost any technology discussed in this book. Already within reach are so-called “gene drive” technologies, which could render populations of malaria-bearing mosquitos â€“ or any other troublesome species â€“ sterile, potentially driving them to extinction, albeit with unknown ancillary consequences. Researchers have also developed a synthetic genetic code known as XNA, which sports two new nucleotides and can code for up to 172 amino acids, as opposed to the usual 20. Modifying organisms to contain XNA opens up the possibility of creating proteins with entirely novel functions, as well as the tantalizing prospect of plants and animals that are entirely immune to all current viruses, due to the viruses’ inability to hijack a foreign genetic code for their own uses.

While the book touches on agriculture, its main preoccupation is medical research. Despite many of the therapies covered being far from ready for use in humans, one can’t help but feel that a revolution in the treatment of diseases, both infectious and genetic, is at hand. Only a year ago, gene editing was used to cure a baby girl of leukemia by engineering her immune system to recognize and attack her own cancerous cells. In the lab, the health of mice with single gene disorders such as Huntington’s disease and Duchenne muscular dystrophy is being significantly improved. Writing in 1962 in his book The Genetic Code, Isaac Asimov speculated that someday “the precise points of deficiency in various inherited diseases and in the disorders of the cell’s chemical machinery may be spotted along the chromosome.” Some 54 years later, we have the technology not only to spot these points but to fix them as precisely as a typo in a manuscript.