One consequence of the COVID-19 pandemic is the accelerated development of new vaccines. Researchers quickly created, tested, manufactured and administered new vaccines, most of them based on messenger RNA (mRNA). mRNA is a knowledge base that has been in development for decades.

Many people remain hesitant to get vaccinated for different reasons, including a reluctance to be injected with laboratory manipulated genetic material. Now, a new vaccine based on plants called COVIFENZ is available. The Quebec biotechnology company Medicago developed this vaccine. Health Canada recently approved it for emergency use. Perhaps a vaccine derived from plants will change some people’s minds about getting vaccinated.

How are vaccines developed? 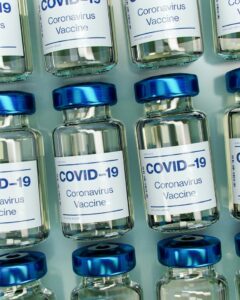 Vials of COVID-19 vaccine. Photo by Daniel Schludi on Unsplash.

Vaccines protect us from various pathogens including influenza, measles, smallpox, and polio. The first vaccines were developed over 200 years ago. Most viral vaccines are produced in four major steps:

The vaccines are then ready to be packaged and distributed.

The Pfizer-BioNTech and Moderna mRNA vaccines are created differently. Scientists identified and used a specific mRNA sequence from the genetic code of the COVID-19 virus. When introduced into our bodies, our cells read the mRNA sequence and produce an antigen that results in a specific immune response. Rather than producing the antigen in animal cells and extracting it, the mRNA vaccines allow our own cells to produce the antigen, without any exposure to the virus itself. This process is what makes mRNA vaccines so revolutionary. 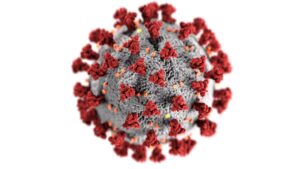 This visualization shows the SARS-CoV-2 virus that causes the COVID-19 infection. The red spikes are the spike proteins that are mimicked in the vaccines. Image created at the Centers for Disease Control and Prevention (CDC) on Unsplash.

There are plant-based vaccines for animals; however, none existed for human use—until now. Plant-based vaccine development is similar to other viral vaccines, with one exception. Instead of reproducing the antigen in animal cells, the antigen replicates inside a growing plant for a few days. The gene of interest comes from a protein often found on the virus’s surface, called a capsid or envelope protein. Researchers introduce this genetic material into an optimal plant species. The plant cells read the genetic material and produce virus-like particles (VLPs). VLPs resemble the structure of the virus because they express the chosen capsid or envelope protein. But the VLPs do not contain viral genetic material, making them non-infectious. The VLPs act as the antigen that allows the body to produce an immune reaction.

Medicago uses the plant Nicotiana benthamiana, a close relative of the tobacco plant, in its plant-based vaccine process. The gene encoding the spike protein of the SARS-CoV-2 virus is injected into the plant so that the resulting VLPs contain a protein that mimics the spike protein on the SARS-CoV-2 viral particle. This method avoids using a weakened or inactive segment of the virus. After a few days, the VLPs are extracted from the plants, purified, and combined with the adjuvant.

Plant-based vaccines have many advantages compared to other vaccine production strategies. First, the production of the vaccine is relatively inexpensive. Second, the plant-produced antigens are very stable and easily stored for long periods. Although there are limited data, researchers have concluded that plant-based vaccines do not seem to cause any adverse health effects.

In a press release, Medicago states that in the Phase 3 clinical trial of COVIFENZ, “no related serious adverse events were reported,” and symptoms lasted “on average only 1 to 3 days.” The company has not released their full results but claims that a peer-reviewed publication will be published “as soon as possible.” Researchers who developed other plant-based vaccines in clinical trials reported no adverse effects in the test subjects or mild to moderate side effects.

One major disadvantage of Medicago’s plant-based vaccine is its efficacy at preventing symptomatic infection. Compared to the mRNA vaccines, COVIFENZ’s efficacy is relatively low: only 71%. Other disadvantages revolve around the production of plant-based vaccines. Choosing the correct gene to use and a compatible host plant are difficult decisions that determine the safety and stability of the vaccine. Plants of the same species produce different amounts of the antigen, affecting antigen availability. Finally, there are specific regulatory requirements for producing plant-based vaccines to ensure the quality of the plants and vaccine. Since plants are biological products, they must follow general regulatory standards, like Good Manufacturing Practice, and specific regulatory standards, including Good Agricultural Practices. These regulations ensure that the company raises the crops using strict guidelines throughout their growth cycle.

*VLPs are reportedly more stable. **Full results with details of side effects have yet to be released by Medicago.

In an interview with Prevention, Dr. Amesh A. Adalja, M.D., an infectious disease expert at the Johns Hopkins Center for Health Security, said plant-based vaccines might appeal to people who worry other vaccines are not natural enough. They may also appeal to people with religious concerns. He said, “having multiple vaccines using multiple different technologies makes it less tenable for people to shun all vaccines.” Similarly, Dr. Isaac Bogoch, an infectious disease specialist, told CBC News that “[…] there might be some individuals who choose to get vaccinated with a non-mRNA product.”

The World Health Organization (WHO) has not approved COVIFENZ for emergency use. This decision is due to Medicago’s involvement with Philip Morris International, the producer of Marlboro cigarettes. It is not a reflection of the vaccine’s value as a tool for fighting the COVID-19 pandemic. WHO is currently reviewing its policies to see if it can approve a product associated with the tobacco industry. In the meantime, the Government of Canada has signed an agreement to buy 20 million doses with an option to buy 56 million more.

Vaccines have been used for centuries to protect people from disease. Today, researchers are developing or improving vaccine technologies to fight our newest viral foe: COVID-19. Canada is on the frontline, creating a safe plant-based vaccine that protects against this disease and may overcome another deadly circumstance—vaccine hesitancy.

Feature image: A scientist examines the contents of a vial in a laboratory. Photo by Diane Serik on Unsplash.