In 2011, a massive earthquake struck the east coast of Japan. Both the earthquake itself – and the tsunami that followed – left a wake of destruction, most famously at the Fukushima Daiichi nuclear power plant. Three reactor cores were damaged and began to leak radiation and radioactive particles, resulting in the largest nuclear event since the 1986 Chernobyl meltdown.

The Fukushima event made news in Canada because many people on the west coast of North America were concerned about potentially damaging radiation reaching their shores. But in the four years since the disaster, how real of a threat has radiation from across the Pacific Ocean turned out to be?

The words “nuclear radiation” can be alarming, especially out of context, but both the physics and risks to human health are well understood.

Nuclear radiation is radiation that originates in the nucleus of an atom. Some nuclei are stable, like hydrogen (with one proton) or carbon (with six protons and six neutrons). However, other nuclei are unstable — perhaps if they have too many protons or neutrons. An unstable nucleus must decay to a more stable configuration through the release of energy and particles.

When a nucleus decays, it emits helium nuclei, electrons, or high energy photons — particles that are collectively called nuclear radiation. Because these particles have enough energy to strip electrons from an atom, nuclear radiation is also ionizing radiation. Ionizing radiation changes the chemical properties of the material it interacts with – notably, this includes biological tissues.

While ionizing radiation can damage tissues, it takes a fairly large dose to induce health problems. Radiation dosage is measured in sieverts (Sv): one Sv is defined as one joule of ionizing radiation absorbed per kilogram of tissue, and takes into account the type of radiation. One sievert is a large amount of radiation (and, coincidentally, about the absorbed dosage needed to induce radiation sickness), so typical dosages are measured in millisieverts (mSv).

We are constantly exposed to a natural background of nuclear radiation: everything from cosmic rays (~0.3 mSv per year), to radioactive isotopes in the air and soil (~0.9 and ~0.2 mSv per year), to the food we eat (one banana contains ~0.0001 mSv of radioactive potassium!), to the people we care about (sleeping next to someone exposes you to ~0.00005 mSv), or even our own bodies. A round of full-mouth dental x-rays exposes you to 0.150 mSv, while a seven hour flight gives you a 0.03 mSv dosage. These exposures are all very small compared with the maximum permissible radiation dose in Canada, which is set at 1 mSv per year. This is on top of the natural background dosage, which in Canada averages up to 1.8 mSv per year. That adds up to many bushels of bananas!

For a human to absorb radiation, they need to be close enough to the radioactive source for the emitted radiation to reach their body. Depending on the type of nuclear radiation, the emission range in air is between a few centimetres to a few hundred metres. The potential threat to people on the west coast of North America isn’t the radiation from Fukushima reactors themselves, but from the radioactive atoms released from the plant and carried by air and ocean currents.

Atmospheric circulation is faster than oceanic circulation, so the first plume of radioactive material from the Fukushima disaster came on the winds. Within 5-10 days, the atmosphere had transported radioactive atoms from the disaster around the Earth. A site in the eastern United States measured very small amounts of radioactive cesium and iodine-131 10 days after the accident.

The oceanic plume, however, took nearly three years to cross the Pacific: it began to arrive on the west coast in spring 2014, and is expected to be spread out over the next few years. Ongoing research is monitoring oceanic radiation levels along the west coast (including work out of Canada’s Dept. of Fisheries and Oceans). Citizen science projects like Our Radioactive Ocean have also recruited locals to collect seawater samples at sites along the west coast of North America, which are shipped back to the lab and tested for the presence of radioactive cesium. While this project is coordinated largely at Woods Hole Oceanographic Institute in Massachusetts, Jay Cullen of the University of Victoria is doing critical work on monitoring the British Columbia coast. 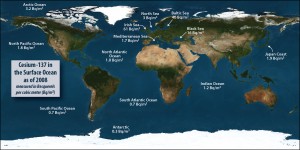 Observations to date show very low levels of radioactivity on the west coast stemming from the Fukushima disaster. In August 2014, less than 2 Bq/m3 (Becquerel per cubic metre) of cesium-134 was measured in the ocean off the west coast. This is a miniscule amount of radiation: if a 70 kg person swam in this water for an hour, and absorbed all of the nuclear radiation from the cesium in the nearest 10 m3 of water (a generous estimate), this would be an equivalent dose to eating about 1/500 of a banana. Scientists expect the amount of detectable radiation in the ocean to increase in the near future, but only to an amount of ~20-30 Bq/m3 — which is 300 times less than the limit deemed safe.

As our world looks for alternatives to fossil fuels, nuclear energy is an option for power generation. Canada is a global player in the nuclear sector: we are the second largest exporter of uranium (behind Kazakhstan), and have a substantial history of innovation in designing nuclear reactors, including the CANDU reactors. Our Chalk River facility supplies one third of the world’s medical isotopes used in diagnostic and radiative medicine. Even if we don’t expand our nuclear infrastructure, there are currently 19 nuclear power reactors online (all in Ontario except for one in New Brunswick), plus a large number of research and industry reactors like Chalk River. This carries some risk, and disasters like Fukushima inevitably lead to calls for divestment from nuclear power. To understand the actual risks rather than the perceived risks, we need to avoid unnecessary fear mongering surrounding nuclear radiation, and move towards widespread public awareness of nuclear science in Canada.

One thought on “Radiation on Canada’s west coast: What’s the risk?”