Some call it dirt, others call it mud. Some want to cover it up with asphalt or grass, while others want to drive a 4×4 through it. However you see it, soil is ubiquitous in our environment – and 2015 is the International Year of Soil, according to the UN Food and Agriculture Organization (FAO). 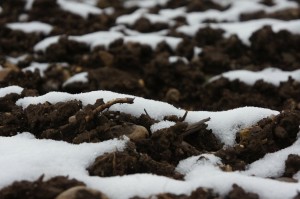 More than merely dirt (and in some circles, describing it as such will have you excommunicated!), soil is a complex mix of minerals, organic matter, and living organisms â€“ including bacteria. Soils are fascinating in that they represent the culmination of centuries of topography, climate, and vegetation interacting with and acting on local geology. Because of this, soils are geographically unique, painting a regional picture of the location in which they’re found.

Scientists classify soils using a taxonomic system that divides soils into orders â€“ and associated sub-groups â€“ based on their physical properties (texture, colour, chemistry, etc.). To make things more complicated, the Canadian System of Soil Classification is different than the US system, both of which are different from the FAO system (see this table). 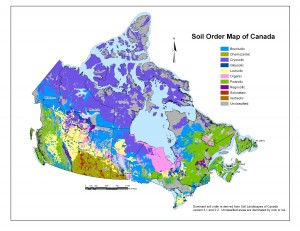 Soil orders of Canada, from the Canadian System of Soil Classification (from Soils of Canada).

But classification is only the beginning of soil science. NASA is set to launch the SMAP (Soil Moisture Active Passive) satellite next week, which will measure soil moisture around the globe, while researchers in the US have launched a global citizen science project to find soil bacteria that could lead to new antibiotics.

Soils are the key to finding ways to feed our growing global population, but are also critical in managing natural disasters and hazards, as Nature News note in their editorial about the Year of Mud (the Geological Society in London’s take on the Year of Soil). In Canada, our soils support a rich agricultural heritage across the country â€“ not just in the Prairies, but across southern Canada. However, in the Lower Mainland region of British Columbia â€“ particularly Richmond and Delta â€“ those same agricultural soils are predicted to be an extreme liability in the event of a Cascadian earthquake. The Association of Professional Engineers and Geoscientists of BC (APEGBC) warns that these soils are prone to liquefaction, which is when the soil loses its structural integrity and behaves as a liquid instead of a solid.

Unfortunately, soils are not immune to the impacts of human activities â€“ agricultural soils in particular are under threat from urbanization and other development. Statistics Canada reports that, from 2001 to 2011, settled area on agricultural land increased by 19%, while in British Columbia, the approval of the Site C hydropower project will result in the flooding of almost 4000 ha of valuable farmland.

Whatever your take on soil, it’s fundamental to our existence â€“ so take a moment to appreciate it for being more than just dirt!