The flu seems to come out of nowhere. One minute you’re feeling on top of the world, then within just a few short hours you feel feverish, achy, tired, and all-around miserable. It’s an unpredictable infection, striking quickly and without much warning. That same unpredictability plays out at the global level, especially when coming up with the seasonal flu vaccine itself.

The seasonal flu vaccine contains three components: a strain of influenza H3N2 virus, an H1N1 strain, and a strain of influenza B. Together, they should offer protection against most of the flu viruses that circulate during flu season. However, decisions about which three strains to include in the vaccine must be made well ahead of flu season, so instead of waiting to see which strains are circulating, we make an educated guess as to what could be spreading in our communities in six to eight months’ time.

As you can imagine, sometimes these predictions are incorrect. We might predict correctly for two of the three components, but get one wrong â€“ this happens often with the H3N2 virus, which mutates quickly compared to H1N1 or influenza B viruses. Or we might be surprised by an entirely new strain of flu that’s never been seen before, as in the case of the 2009 swine-origin H1N1 pandemic.

When the flu strain in the vaccine doesn’t match the flu circulating in the population, we call it a mismatch. Mismatches result in reduced vaccine effectiveness, thus some people who receive the seasonal flu vaccine will still catch the flu. In a mismatch situation, vaccine effectiveness can drop from its usual 70% to as low as 20-30% – there’s still some protection, but not as much as we’d like to see. 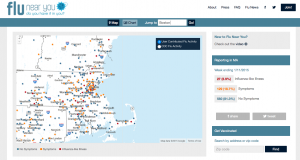 The Flu Near You webpage tracks flu cases across North America. Here we zoom in on Boston, which is FNY’s headquarters and thus has greatest available data.

So, until we invent an all-knowing, all-seeing crystal ball, how do we equip ourselves to make the most informed decision about what goes into the flu vaccine? Data!

Open access to data is changing the way public health operates. From websites like HealthMap.org that scan web-based sources to track disease outbreak activity and make the information available to anyone with an internet connection, to research groups who make their data freely available online and invite people around the world to participate in their analyses, data sharing is helping researchers examine and accurately understand health conditions faster than ever before.

This is particularly true for influenza. Several years ago, the influenza research community began openly sharing data derived from sequencing the genetic material of the flu virus. Through websites like GISAID and the NCBI Influenza Virus Resource, anybody can access the gene sequences of flu viruses under analysis in a global network of labs.

These gene sequences give us a window into real-time viral evolution, and help us select components of the seasonal flu vaccine. We may see that a particular strain is emerging and will dominate the coming flu season, suggesting it should be included in the vaccine. Alternatively, we may see that viruses like the H1N1 haven’t mutated much, so we haven’t changed that vaccine component since it was introduced five years ago.

We may also see an emerging virus that differs from the latest vaccine strain, which may lead us to change the strain included in next season’s vaccine. For example, this year’s vaccine for the northern hemisphere used last season’s H3N2 strain, but the vaccine being made for the southern hemisphere (their flu season occurs around July, when it’s their wintertime) includes a new strain because genetic data suggested a new type of H3N2 virus was emerging. It appears that this new strain is dominating even in the northern hemisphere this season, meaning that the H3N2 component of this year’s seasonal flu vaccine is showing reduced effectiveness.

Data sharing has also been useful in rapidly understanding completely new types of influenza. In 2009, when the novel swine-origin H1N1 virus emerged and caused a pandemic, gene sequences from viruses collected around the world were generated on a daily basis and put in a public repository. Andrew Rambaut, an evolutionary biologist based in Scotland, created a wiki page through which flu experts from around the world contributed their analyses of the available sequences. Using this collaborative “open lab notebook”, the team was able to calculate several important features of the virus early in the outbreak, including how quickly it was spreading, which existing flu viruses recombined to make the new pandemic virus, and when that recombination likely occurred.

A few short years later, when novel swine-origin H3N2 viruses began appearing in people who had visited agricultural fairs in the US Midwest, the same genetic data analyses were used to quickly ascertain that the new viruses posed little to no pandemic risk for the adult population, although production of a vaccine was undertaken as a precautionary measure.

As new influenza viruses continue to emerge, real-time genetic analyses will help us understand and respond to these new threats. Similar analyses of other pathogens will help us understand other emerging infectious diseases on public health’s radar. Wiki-based crowd-sourced analyses have already helped unravel a new strain of E. coli that caused a large outbreak in Germany in 2011. Researchers recently released genetic sequence data from Ebola viruses from the ongoing West African outbreak, hoping to help accelerate an understanding of the outbreak and its dynamics.

Public health in the 21st century will rely fundamentally on data. Researchers and health agencies can open the door to new discoveries, new understanding, and a new collaborative spirit by making as much of their data freely accessible as possible, by encouraging information-sharing through social media and wiki pages, and by promoting rapid turn-around, open-access publishing to share their results. Data and its democratic use may be our best defense against future pandemics.