As a science writer, people often ask me which came first: my passion for chemistry or my love of words and language. I never have a good answer – these things come about organically, so to speak – but I’d like to point out that the two worlds aren’t as far apart as we might think. Chemists are people, too, so it shouldn’t surprise us to discover that some of their favourite technical terms have crept into our everyday language. In fact, you may be using expressions, phrases, and idioms that borrow from chemistry concepts without even realizing it. Here are a few fun examples:

Bromides: In the 19th century, doctors discovered that bromide salts, especially potassium bromide, seemed to help reduce seizures in people with epilepsy. As central nervous system depressants, however, they had the side effect of making people drowsy. Soon, pharmacists began to market them as sleep aids. Eventually the term bromide came to be applied to other things that put people to sleep, such as the boring, uninspired comments made by some public speakers. A bromide could even describe the type of person who regularly made such comments.

Unfortunately, real bromides aren’t the safest sleep aids around. Because it takes a long time for our bodies to clear them from the bloodstream, they can often build up to toxic levels. In the 1970s, bromides were taken off the market for humans, but they are still used in the treatment of epilepsy in dogs. Yet the use of the word bromide to describe clichÃ©d and uninteresting comments is still with us, especially in the context of political speeches. 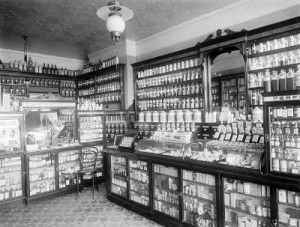 In the early 20th century, drug stores like this one in Waterford, Ireland, would have been well-stocked with bromide salts for use as sleep aids. Photo credit: National Library of Ireland, via Flickr Commons.

Mercurial: Meaning lively, quick to react, and often changing, mercurial has been used to describe people and their moods since the 16th century. More recently, it’s been applied to the ups and downs of the stock market, the performance of sports teams, or anything else unpredictable. While many etymologists connect it with Mercury the god – the Roman version of the Greek Hermes, a messenger god who was indeed quick to pass news around Mount Olympus and beyond – a connection with the element Mercury is likely at work here too.

Also known as quicksilver, mercury is the only element that is a liquid at room temperature. Anyone who’s ever held a container of mercury will attest to the fascinating way it slides around, breaks apart and comes back together, seeming to change its mind every few seconds. Just don’t break the vial! While the liquid form is not easily absorbed by the body, mercury vapour is, and it can cause serious damage to nerves and the brain. 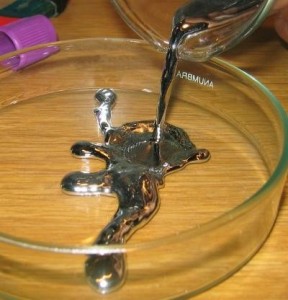 The unpredictable twisting and turning of liquid mercury likely led to the expression “mercurial” meaning quick to react or changeable. Photo credit: Materialscientist, via WikiMedia Commons.

Catalyst: A catalyst is any substance that speeds up a chemical reaction without becoming used up itself. Many catalysts work by grabbing two different molecules and bringing them together, increasing the chance that they will react to form something new. That’s the idea being invoked when corporate leaders talk about something or someone being a “catalyst for change.”

The analogy isn’t perfect though, as catalysis is a two-way street. Many catalysts make new things by breaking apart something that was already formed. For example, our bodies contain digestive enzymes whose only job is to break chemical bonds, turning long-chain molecules like proteins, carbohydrates, and fats back into their building blocks. Our bodies then either burn these building blocks for energy, or build them back up into new structures. Salt and water act as catalysts in the reactions that turn useful steel into useless rust. While change is inevitable, it isn’t always desirable.

Chemistry (attraction): We sometimes forget that the very word chemistry itself has an alternate meaning, referring to an interaction, attraction, or rapport between two or more people. In fact, this use of the word chemistry is even older than the scientific discipline itself. It likely comes from the study of alchemy, which in the 14th and 15th centuries was very much a dark art.

Watching alchemists change one substance into something very different – for example, heating red, powdered cinnabar and watching the vapours condense to form liquid, silvery mercury – must for many people have seemed indistinguishable from magic. It makes sense that they would apply the same term to the unexplained change that comes over people when they have a deep emotional connection. Likewise, when people fail to hit it off, we say they have “bad chemistry” or “no chemistry” to describe a lack of that special something that is so hard to put into words.

Today we understand that the brains of people in love are in fact teeming with chemicals. Neurotransmitters like oxytocin, vasopressin, dopamine, serotonin and many more regulate the biochemical reactions that we perceive as feelings. So whether you want to analyse the biological basis of love or simply evoke its mysterious, ineffable nature, the right word is chemistry.

Once you become attuned to the idea, you start to spot chemistry expressions everywhere: we wonder when a particular plan is going to ‘crystallize’ or if it will just ‘dissolve’ into nothingness. The language of chemistry isn’t some secret code understandable only by a chosen few, it is part of the culture we all share. Through this shared language, I hope that chemists and non-chemists can find common ground and reduce the fear that seems to surround many chemistry topics. To quote one of my favourite jokes: if you’re not part of the solution, you’re part of the precipitate.

Can you think of chemistry expressions I haven’t mentioned? Let me know in the comments.