They say: an apple a day keeps the doctor away. But is this phrase as true today as when it was coined in 1922? Researchers in Nova Scotia found that today’s apples, although bigger and sweeter, contain fewer health benefits than they did in the past. Specifically, the levels of antioxidants in apples have decreased by almost three-fold. Does this mean apples are unhealthy? Absolutely not. They just contain fewer antioxidants than they used to.

In a world where dietary and nutritional supplements have shot up in popularity, it’s difficult to know if that blueberry-acai smoothie is actually beneficial to your health or just a money grab. When it comes to antioxidants, which people often associate with healthy skin, they are scientifically proven to be good for human health. Antioxidants prevent the damaging effects of molecules with unpaired electrons, called free radicals, or reactive oxygen species (ROS). ROS are types of free radicals that are, or contain, oxygen. Moderate levels of  ROS are necessary for promoting sufficient immune responses and cellular signaling but a high concentration of ROS causes cellular damage and can lead to diseases such as cancer and arthritis. Epithelial (skin) cells, which primarily serve as a barrier against physical and chemical harm, also gain protection from ROS through antioxidants because they help to prevent wrinkling and inflammation.

The biochemistry of reactive oxygen species

ROS are produced as the body converts food or stored fats into energy. Human cells contain mitochondria. This organelle is responsible for producing adenosine triphosphate (ATP), a molecule used for all energetic processes in our bodies. The energy required to produce ATP comes from the movement of electrons through a group of proteins within the mitochondria called the electron transport chain (ETC). The molecule that finally reacts with the electrons in the ETC is oxygen (O2). Oxygen has a high affinity for electrons and “pulls” them through the ETC, facilitating the production of ATP in the process. This is one of the main reasons we require oxygen to stay alive. Once O2 gains four electrons, it reacts with hydrogen to form water.

Electrons can be either stable or reactive. When electrons are in pairs, they are generally more stable and less harmful to their surroundings. When a molecule contains a single, or unpaired electron, it is a free radical. Molecules in this state are less stable and more reactive with their surroundings. Desperate to find a second electron to create a pair, free radicals steal electrons from anything around them, which causes damage to surrounding cells and molecules. When the free radical is oxygen, or contains an oxygen atom, is it referred to as a ROS. ROS are common in the ETC because of oxygen’s dominant role in this chain reaction.

One round of the ETC involves two oxygen atoms which require a total of four electrons to form water. Each time oxygen gains an electron, an intermediate form of oxygen is produced. When oxygen gains one electron it becomes a superoxide anion. Add another electron and it becomes hydrogen peroxide. The third electron creates a hydroxyl radical. The final electron forms water. The superoxide anion and hydroxyl radical are free radicals and highly reactive, making them among the most common ROS produced in our bodies. 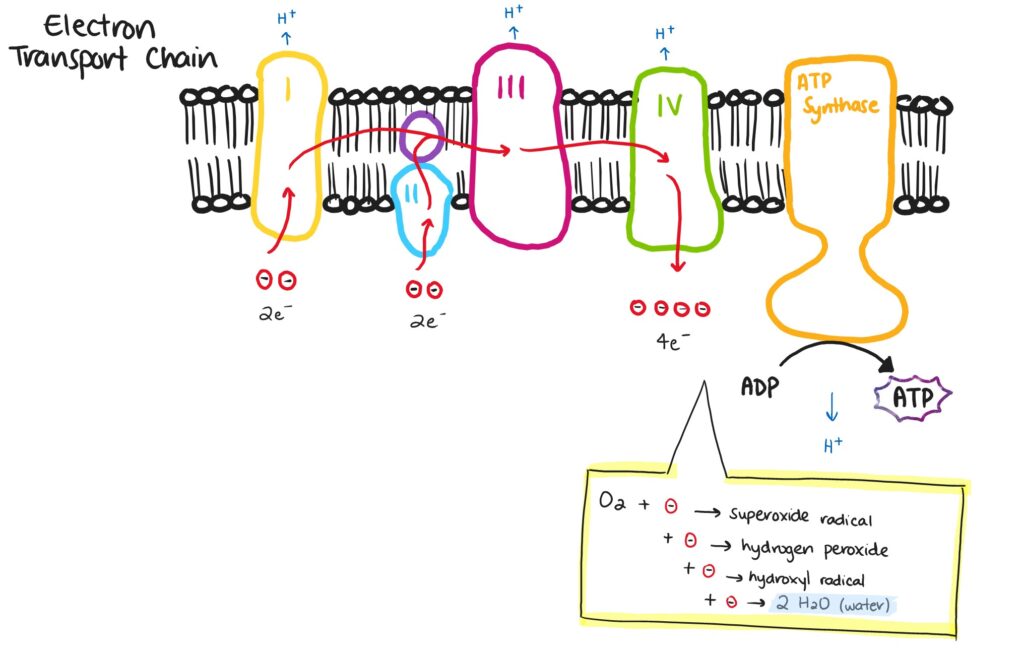 This diagram illustrates the electron transport chain. Electrons travel from complex I through to complex IV before reacting with oxygen to form water and adenosine triphosphate (ATP). Image adapted from Dw001 CC BY-SA 4.0.

How do antioxidants work?

Antioxidants do exactly what their name suggests; they stop oxidizing agents, like oxygen, from stealing electrons from other compounds. Antioxidants neutralize ROS and other free radicals before they can react with biological molecules and cause damage. The chemical properties of antioxidants allow them to easily donate their electrons to free radicals to stabilize them. 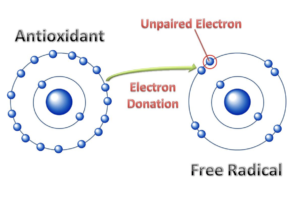 Antioxidants donate electrons to free radicals. This neutralizes the free radical and prevents the stealing of electrons that leads to molecular damage. Image from Lobo et al. (2018) CC BY-SA 4.0.

Our bodies naturally produce some antioxidants and more are supplied by the foods we eat. These foods contain benefical vitamins including A, C, E and K. Ever wondered why doctors encourage us to consume coloured vegetables? It’s because carotenoids, the naturally occurring pigments in plants, are actually antioxidants. How about dark chocolate? Same idea. Flavonoids found in cocoa, blueberries and apples are also antioxidants.

The apparent benefits of antioxidants have led to a broad range of dietary supplements (pills, capsules, powders, drinks) produced either by extraction from natural sources or through chemical synthesis. However, research shows that antioxidant supplements fail to offer the same health benefits as natural foods. Lack of knowledge surrounding the long-term effects and appropriate dosage requirements of antioxidants make it difficult to establish standard use of supplements. The risk becomes greater than the benefit when high antioxidant consumption triggers more ROS production than elimination, which can pose a danger to our health. 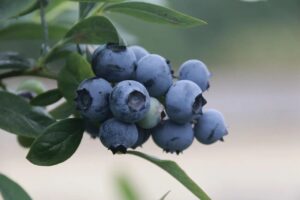 Blueberries, a food commonly associated with antioxidants, contain a type of flavonoid called anthocyanin that gives blueberries their colour and is an antioxidant. Image from NmewahanG CC.

Despite the conflicting research on antioxidant supplements, observational studies show that people who consume more fruits and vegetables have a lower risk of developing cancer and cardiovascular diseases or having a stroke. As with many relationships in science, a causal claim—to say that antioxidants are the cause of this reduced risk—cannot definitively be made. The lack of research means it is unclear if the beneficial effects of fruits and vegetables are a result of antioxidants or other factors.

Regardless of whether antioxidants cause the observed health benefits, it is clear that fruits and vegetables are important for sustaining our health. With the realization that natural foods may contain less nutrition than before, it is even more critical to make them a main component of our diet.

Feature image: Antioxidants occur naturally in a variety of fruits and vegetables. There are also many antioxidant supplements available on the market. Is one as good as the other? Left image from matthiasboeckel CC, right image from Rawpixel CC0 1.0.