Chances are you’ve heard about Ebola outbreak that has gripped several west African nations. The outcomes of Ebola are far more severe than similar diseases that claim far more lives each year, and the fatality rate is much higher than others such as cholera, typhoid, and dysentery. However, the rate of infection of Ebola is relatively low, and is most easily spread by coming into contact with the bodily fluids and wastes of an infected person.

Sanitation and wastewater engineers are involved in city planning and work on the infrastructure of water and wastewater facilities and the safety concerns around them. Sanitation and wastewater engineers are often the first line of defense in the spread of infectious diseases, as they ensure that potable water is available to households, and that wastes are separated and disposed of in a safe manner. There is a growing need for safe drinking water solutions around the world for many reasons, most often the lack of good water infrastructure. In fact, 780 million people around the world lack access to safe drinking water on a regular basis. 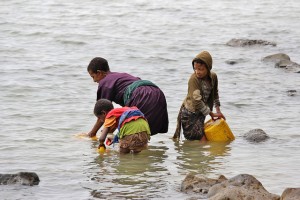 This water is used for drinking, washing, and bathing. (Photo: marlo_rukh; CC BY-NC-SA 2.0).

The Canadian NGO Engineers Without Borders has devoted a large part of their activities in Africa to raising awareness of and providing solutions to water issues, especially in Malawi, where they work with local people to scale up infrastructure and improve drinking water safety. 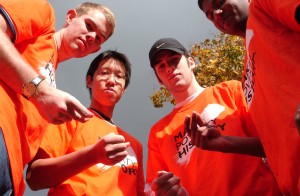 If you’re interested in water and sanitation engineering, you may want to explore the work of other organizations, such as Water for People and the Water Environment Federation.

The latest technology & engineering posts from the Science Borealis feed include:

One thought on “What does Ebola have to do with engineering?”