Chemistry stories are inherently boring. At least, that’s how they’re often seen by the editors I pitch to. The producer of a prominent science news program once told me that every good chemistry story is really about either biology or physics.

To me it always seemed kind of unfair that we appear to care about molecules only in terms of the effect (good or bad) they have on the human body, or that while the study of matter is indisputably the domain of chemistry, the study of antimatter is somehow classified as physics. So when nanotechnology began to gain popularity as a hot new field of study, I naturally started to worry about whether or not chemists would be able to claim their rightful place as big players in the world of the very small. 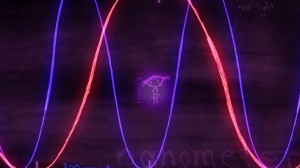 Nanometres are smaller than the wavelengths of visible light. Click the photo to see a fun video explaining how small the nanoscale is. (Image credit: Daniel Gies, e.d.Films)

How small is nano? An often-used comparison is that one nanometre is to the thickness of a human hair as one inch is to a mile. It is literally too small to see; the wavelengths of visible light are hundreds of nanometres apart. A water molecule is about a third of a nanometre in size. Proteins â€“ which are long, folded-up chains of smaller molecules called amino acids â€“ can be tens or hundreds of nanometres across. Organic molecules like caffeine, sugar, and the active ingredients in many pharmaceuticals can all be measured in nanometres. Thus, the nano world is one which chemists have inhabited for a long time.

In general, chemists tend to favour the “bottom-up” approach. For example, a chemist might start with two solutions, each of which contains a different solution of dissolved ions (ions are much smaller than a nanometre in size). When mixed, the ions react and join together, forming solid crystals that grow larger and larger and eventually precipitate out of solution. You may have done experiments just like this in your high school chemistry class, but if the crystals were big enough for you to actually see, they were definitely not nano. Chemists know how to control reaction conditions to ensure that their particles stay tiny. This means that nanoparticles can exploit the effects of quantum physics â€“ which only act over tiny distances â€“ to do things that larger particles simply can’t do.

These vials contain solutions of silicon nanocrystals that glow when subjected to UV light. The larger crystals (diameter ~2 nanometres) give off red light while the smaller ones (~1 nanometres) are yellow or green. Photo credit: Natural Sciences and Engineering Research Council of Canada.

Such as? Well, University of Toronto chemist Geoffrey Ozin and his team have created nanoparticles of silicon that give off light when electrically excited â€“ larger crystals of silicon don’t do this. These nanoparticles could be used to create cheaper, more vivid colour screens for TVs, computers and other devices. Also at the University of Toronto, Ted Sargent and his team have made nanoparticles that do the opposite, capturing sunlight to generate electricity and potentially giving rise to a new generation of solar panels. (Although Sargent is an electrical engineer, his team includes plenty of chemists and chemical engineers.) Both teams use the bottom-up approach, and both have mastered ways of controlling the exact size of the particles; for example, by lengthening or shortening the amount of time the chemical precursors have to react, they can make the particles bigger or smaller. This is important, because different sized particles absorb (or emit) different frequencies of light. Thus, chemical control allows these teams to ‘tune’ their devices.

There is one arena where the top-down approach is used, and that is the creation of nano-crystalline cellulose (NCC). Cellulose is a long-chain molecule that is one of the major components of wood fibres; it’s what paper and cardboard are made of. Mostly it’s a jumble, like a bunch of microscopic spaghetti strings, but every once in a while, a few strings line up just right and bind tightly, creating a nano-sized region of hard, crystalline material. Back in the 1990s, Canadian chemists worked out how to use acid and other chemical treatments to dissolve the jumbled sections and leave behind the harder bits. Unfortunately, they made the mistake of calling them crystallites. A few years ago, I interviewed Derek Gray, the McGill chemist who oversaw this early work. “The vocabulary matters sometimes,” said Gray, somewhat wistfully. “Cellulose crystallites sound boring, but when the whole nano thing took off, people called them cellulose nanocrystals and they became more exciting.” 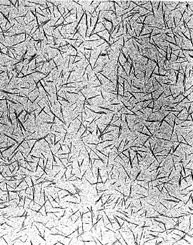 A transmission electron micrograph of cellulose nanocrystals derived from wood fiber. Each one is typically 200 nm long and about 10 nm wide. (Credit: Derek Gray) 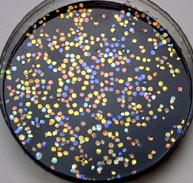 Gray and his team soon discovered that these nanocrystals had a tendency to line up in a very specific way, called a chiral nematic structure. You can imagine it like a twisting staircase. Because it’s on the same scale as visible light waves, the chiral nematic pattern tends to twist this light into interesting patterns. This property could be used in filters or other optical devices. Researchers are also looking into incorporating the crystals into plastic composites to make them harder and stronger, or spinning them into fibres to make bulletproof vests. A few years ago, a company called CelluForce opened a plant in Windsor, Quebec that will churn out huge quantities of cellulose nanocrystals for researchers to play with, and hopes are high that this innovative product will transform the Canadian forestry industry.

As trendy as it is these days, nanotechnology isn’t really all that new. Nanoparticles of titanium dioxide (TiO2) have been used for decades as a whitening agent in everything from house paint to toothpaste. What’s changed is the precision with which we can make very small things, and the number of places where this technology is being applied.

I’m not trying to say that nanotechnology belongs to chemists alone; of course we will need electrical engineers and materials scientists, not to mention nanotoxicologists to ensure that these tiny particles remain safe for human and environmental health. But I do hope that in the coming decades when we sit down in front of our ultra-clear screens in our solar-powered houses while wearing space-age, nano-engineered fabrics, we remember that it was chemistry that made it all possible.