When I’m not writing and editing for Science Borealis, I’m working as a cancer genetic counsellor. I spend a lot of time talking to people about the risks and benefits of having genetic testing. Sometimes my patients know that there is an inherited form of cancer in their family and are trying to decide if they want to know if they “have the gene.” They often have questions about what their cancer risks will be if they test positive, and what steps they can take to reduce that risk. Sometimes they have concerns about how their test results might impact them emotionally. And, quite frequently, they ask me if they’ll still be able to buy certain types of insurance if they get tested.

Until very recently, it was difficult to give these patients a reassuring answer to that last question.

However, in July this year, Canada’s Supreme Court ruled that a controversial piece of legislation known as the Genetic Non-Discrimination Act (GNDA) is constitutional and will remain law. This ruling means that the GNDA will continue to protect patients with genetic predispositions to disease from at least some forms of discrimination, such as being denied life or disability insurance. Still, there are lingering questions about whether the GNDA was the right way to go about protecting patients (and whether it goes far enough).

Before 2017, there was no legislation in Canada that prohibited insurance providers or employers from discriminating against a person on the basis of their genetic test results. But on May 4, 2017, Parliament passed Bill S-201, creating the GNDA. Under this law, it is a criminal offense to withhold goods or services or deny someone a contract because they refuse to undergo genetic testing or hand over their genetic testing results. The potential penalties for violating the GNDA are significant – a fine of up to $1 million and five years in prison. At the time, it was viewed as a major victory for Canadian patients with genetic illnesses.

“It was a long fight,” says Bev Heim-Myers, Chair of the Canadian Coalition for Genetic Fairness (CCGF), and one of the people who led the effort to get legislation in place to prevent discrimination. “It was a 10-year fight, but finally Bill S-201, the third iteration [of the legislation] went through.”

But the GNDA was an unusual and contentious piece of legislation from the start. A private member’s bill sponsored by Senator James Cowan, the legislation was passed with the help of opposition members and Liberal backbenchers, and without the support of Liberal cabinet members. The justice minister and attorney general at the time, Jody Wilson-Raybould, spoke out against the GNDA, saying that it violated provincial and territorial jurisdiction. By October 2017, the Government of Quebec had requested that the Quebec Court of Appeal weigh in on whether the GNDA was a valid exercise of the federal government’s criminal law powers. In late 2018, the Quebec Court of Appeal issued an opinion stating that the law violated provincial and territorial rights, setting the stage for the law to go before the Supreme Court of Canada. 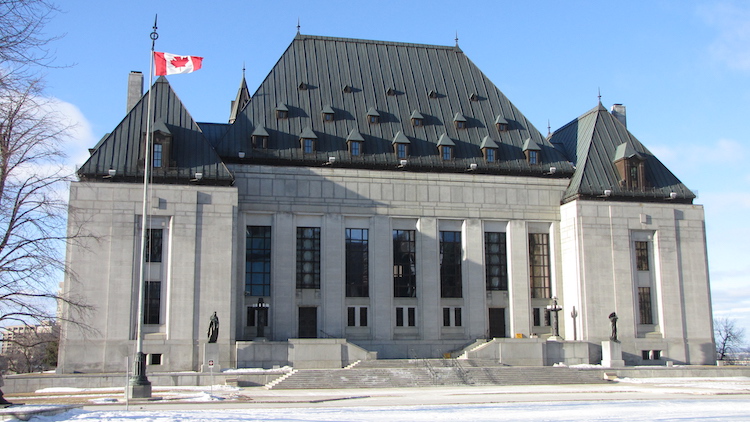 Why do we need to prevent genetic discrimination?

Heim-Myers’s fight against genetic discrimination began during her time as CEO for the Huntington Society of Canada.

Huntington Disease is a devastating inherited neurological condition that typically strikes a person in their late 30s or early 40s. The disease was one of the first genetic conditions that doctors could offer predictive genetic testing for, meaning that patients without symptoms can get a genetic test to determine if they will develop the disease later on. Patients with the Disease were also among the first people to experience documented cases of genetic discrimination.

“When I started with the Huntington Society, one of our researchers said that we will be close to treatments in time,” Heim-Myers recounts. “He said ‘the challenge is that no one will come forward for clinical trials if they are afraid that their genetic test information will be used against them.’”

The Huntington Society agreed that, as part of her role, Heim-Myers would help establish the CCGF and begin advocating for legislation to prohibit genetic discrimination. The CCGF was able to bring together researchers and clinicians with expertise in medical genetics, patients who were willing to testify about their experiences, policy experts and lawyers who were willing to donate their time, and some allies in Parliament.

When the GNDA was passed and then almost immediately challenged, the CCGF continued the fight.

“So, here is a big step back again,” says Heim-Myers. “I worked with lawyers to refer it to the Supreme Court of Canada because [the Quebec Court of Appeal decision] could not be the last decision on the legislation.”

Is the GNDA the right solution to the problem?

Heim-Myers and many in the genetics community were hugely relieved when the Supreme Court of Canada upheld the law. But not everyone in the legal community felt that genetic discrimination should be addressed using federal criminal law power, including the dissenting Supreme Court Justices in the narrow 5â€“4 decision.

Dr. Y.Y. Chen, assistant professor in the Faculty of Law at the University of Ottawa, shares this concern. A lawyer with a particular interest in the intersection of international migration, public health, and constitutional law, Professor Chen doesn’t take issue with the goals of the GNDA. However, he worries that the Supreme Court’s ruling was based on an overly expansive view of federal criminal law power that could have implications for health-related legislation beyond genetic discrimination.

“The issue going forward may be that the federal government can use it’s federal criminal law power to pass [health-related] laws in the name of morality or public health,” Chen says.

As an example, he points to the issue of medical assistance in dying (MAID). Although MAID has been decriminalized across Canada, some provinces, like Quebec, have more expansive policies on who can access MAID, and when.

“One potential consequence following the court’s ruling on the GNDA could be that if the federal government decided ‘This is the way that we’re going to set the terms of who can access MAID and under what circumstances, and that’s it’ then that limits what Quebec can do,” Chen says.

Chen is also concerned that the conversation about genetic discrimination might end with this ruling. He thinks there’s more work to be done.

“Despite this piece of legislation now being upheld and in the books, I think that there are still certain gaps that need to be addressed if we truly want to tackle the issue of genetic discrimination,” he says .

Heim-Meyers and the CCGF have no intention of letting the conversation end here. They are looking at working with the provinces and territories to make their human rights acts and labour codes align with the GNDA. They also plan to educate patients, health-care providers, employers, and insurance providers about genetic discrimination and the GNDA.

As access to genetic testing expands and technology evolves, the existing legislation might need to be revisited. “We hope the law has enough teeth, but we do not know the future,” Heim-Meyers says. “At some point, it might have to be made more robust. Who knows? But we are on strong footing because of the Supreme Court of Canada’s decision.”