Our story begins one late summer morning in 2019, in an apiary in Nanaimo, British Columbia. Along the avenue of trees sits a group of honey bee hives â€“ white boxes stacked one upon another and filled with honey, pollen, and European honey bees. As the sun warms up the hives, the bees begin to stream from the entrance. But today is different. The normal nuisance of bald-faced hornets and yellow jackets are nowhere to be seen. Little does the colony know a foreign predator lurks in its midst.

As the sun reaches its zenith, a large shadow is cast across the entrance of the hive. A low-frequency vibration emanates from above. The tiny hairs on the thorax of each honey bee tremble and antennae twitch, sensing a visitor is approaching. The smell of alarm pheromone wafts from the entrance of the hive. Before stingers can be ejected, two large, jointed legs grip the abdomen of a newly returning worker bee. Before any of her sisters can act, the bee’s head is detached from her thorax by a sharp pair of pointed mandibles and the body is tossed aside. The invader moves on to its next victim. The lone predator moves from one colony to the next, decapitating unsuspecting workers at an alarming rate.

Luckily, the colonies are not decimated as the attacker acted alone. It will not take long for the hives to recover as the honey bee is a resilient species. However, the attacker lives in a colony of thousands, and future attacks could involve many perpetrators. Next time the colonies may not survive.

A nest of Asian giant hornets (Vespa mandarinia) was found in Nanaimo, British Columbia in the fall of 2019. Subsequently, five additional specimens were collected in the Fraser Valley. No Asian giant hornets (AGH) were found in the province in 2020, but in October 2020, a nest with 98 worker hornets was destroyed in Blaine, Washington. 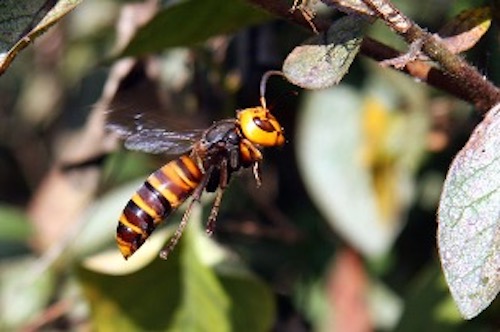 The insect is the world’s largest hornet species, measuring two inches long. It is native to Japan and has spread to Thailand, China, Nepal, and other parts of Asia. It has a large orange head, all-black eyes, black thorax, yellow and brown/black banding on the abdomen, and pronounced dark brown antennae. The hornet’s size is the main identifying feature when compared to North America’s native insects. 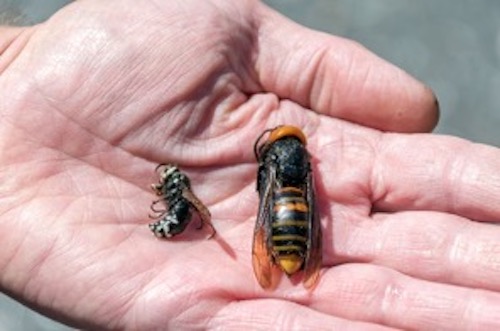 The Asian giant hornet is eusocial. Only the queen reproduces, while the workers forage, care for the developing larvae, and defend the colony. The queen mates with a single male in the fall and then burrows into the soil to overwinter. In the spring, the queen emerges, creates a nest, and begins laying eggs. The nests are often underground or in large tree cavities.

The hornet is a major predator of honey bees. In the late summer and fall, the hornets enter a ‘slaughter’ phase â€“ entire honey bee colonies are destroyed. Ten-to-fifty hornets attack a single colony until no bees are left to defend the hive. The attack can last several hours, and the hornets do not stop until the colony is decimated. The hornets then take the bee larvae back to their nest to feed their brood. 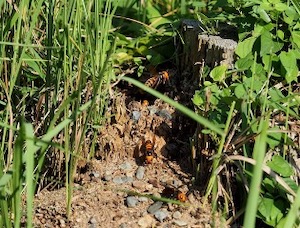 The Asian honey bee (Apis cerana) evolved alongside the hornet and has developed defences against them. These bees are able to detect the hornets’ pheromones. They use a coordinated ‘balling’ defence when attacked. The bees surround the hornet and fan their wings to raise the surrounding temperature to 47 Â°C. This change in air temperature kills the hornet.

The European honey bee, the most common honey bee species in North America, does not have these capabilities and is defenceless against AGH. This is a huge problem because European honey bees are an important agricultural species. These bees are responsible for crop pollination across Canada. In the Fraser Valley, the blueberry industry relies on honey bees to pollinate approximately 28,000 acres of crop.

In its native range, the Asian giant hornet is an opportunistic apex predator. It has no natural enemies and preys upon many different species of insects. The establishment of the hornet in Canada could have a significant impact on native insects. These insects have no defensive adaptations.

It is unclear how successful the Asian giant hornet will be in Canada.

“The predominant evergreen vegetative cover offers a distinctly different habitat compared to the Asian giant hornet’s [AGH] native range,” Westerndorp says. “The forest undergrowth and associated insect fauna will also be different. These environmental differences may have a significant impact on AGH’s ability to establish itself. It is worth noting that AGH favours maritime forest habitat and hence, it may not adapt well in BC’s interior and beyond.”

The public has a role to play in detecting and preventing the establishment of the hornet. The B.C. government has conducted a comprehensive surveillance program that involves installing bottle traps to trap any hornets. It also relies on sightings by beekeepers, local agencies, invasive species councils, the RCMP, border agencies, First Nations, and the public. The government will continue its surveys and anticipates finding the hornets in the Fraser Valley in 2021.

It is unlikely that the insect will move beyond coastal B.C., but sightings are reported outside this region because people are not sufficiently educated about the insect. Cassandra Docherty, the Apiculture Laboratory Coordinator for the Government of Alberta Bee Health Assurance Team, says, “We’ve received many calls and emails reporting the Asian giant hornet in Alberta.” Docherty said her favourite was a large queen bumblebee that set off someone’s security camera. “Luckily, there have been no confirmed reports of AGH so far, and we believe the likelihood of finding one here is low.”

Docherty is worried about our native pollinators. If misidentified as Asian giant hornet, these environmentally important insects might be killed by citizens or local authorities. “What we did learn is that we have a wonderful array of insect species in Alberta that people are discovering. The best thing a person can do is familiarize themselves with our native species, especially the ones that can be mistaken for the Asian giant hornet.” says Docherty.

Here are some North American insects that are commonly mistaken as Asian giant hornet: 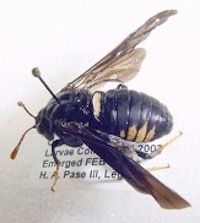 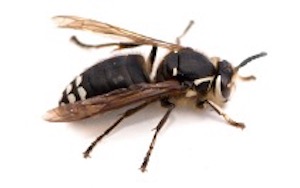 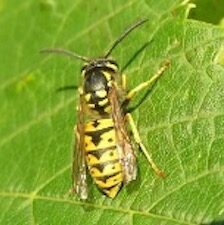 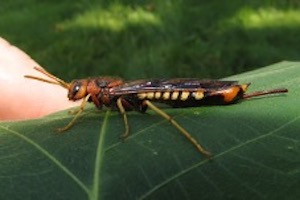 The Asian giant hornet is a concern to the honey bee industry and bee-supported agriculture in coastal Oregon, Washington, and B.C. It is unlikely the hornet will spread beyond these regions due to a lack of habitat and climatic suitability. The hornet also poses a potential threat to our native insects through predation and misidentification by the public. To prevent an invasion and to protect agriculture and native pollinators, we need to educate ourselves about this hornet and our native insect species.