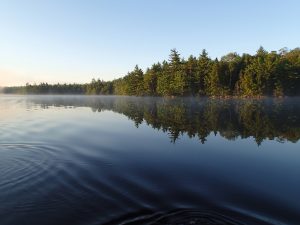 When I tell people I study mercury, they often think I study the planet, not the element. Mercury is the only metal that is liquid at room temperature and, due to its unique chemical properties, it can cycle between land, air, and water through a variety of chemical and biochemical reactions. Industrial activities and the burning of fossil fuels have sped up the rate at which mercury enters the atmosphere from the Earth’s crust, in much the same way the carbon cycle has been altered. Mercury is an extremely toxic metal affecting the nervous system of animals and in severe cases it can have disastrous health consequences, such as Minamata disease in humans, and even death. 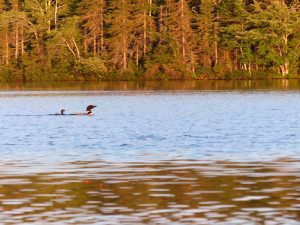 I’m a biogeochemist and I am investigating a chemical reaction that occurs naturally in water and can control the amount of toxic mercury entering organisms. My study area is in Kejimkujik National Park, located in southwestern Nova Scotia. During the 1990s, the common loons here had some of the highest mercury concentrations of any loon population in North America. Since then, research has shown that this area is a hot spot for mercury contamination in many other organisms too. This finding was puzzling because Kejimkujik is remote and has no nearby industrial activity as a point source of mercury.

So what’s going on here? Well, if you live on the East Coast and check the weather as incessantly as I do, you may have noticed that when New York or Toronto have a big rain or snow storm we usually get precipitation from that same weather system a day or two later. These well-documented patterns are due to prevailing wind directions. Consequently, dissolved contaminants from industrial activities, such as mercury, are transported by the winds and deposited thousands of kilometers away from their points of origin.

Some of the ecological characteristics of my study sites also contribute to elevated levels of mercury contamination compared to nearby regions. For example, the soils and waterways are naturally acidic due to the geology and the region has been impacted by acid rain. Kejimkujik also has a lot of wetlands and is very flat, so surface water moves slowly and submerged organic matter accumulates. These conditions facilitate the methylation of dissolved mercury. Bacteria that live in low oxygen environments, such as wetlands and lake sediments, form methylmercury (H3C-Hg+) as a byproduct of decomposing organic matter. It is really important to understand this chemical species of mercury because methylmercury is taken in and retained in bodies more readily than mercury’s other inorganic forms.

Once formed, methylmercury can enter food webs. This has two characteristic outcomes: 1) mercury accumulates in organisms over time as they consume food sources containing it through a process known as bioaccumulation, and 2) concentrations will increase at each step of the food web, through a process known as biomagnification. Larger animals tend to live longer and need to eat more so they accumulate higher mercury burdens than smaller animals. For example, more than 95% of the mercury found in most predatory fish is methylmercury. This also explains why loons, which eat a lot of fish, have high mercury concentrations in their bodies.

Mercury concentrations increase through food webs with larger predatory organisms having the most mercury in their bodies. Image created by Sara Klapstein.

By now you might be wondering: Should I be eating fish? How much and how often is safe? These are important questions to consider but it’s difficult to be definitive because the answers are species- and site-specific. My project focuses on dissolved methylmercury concentrations in water before toxic mercury can enter food webs and harm organisms. Specifically, I study a mechanism called photodemethylation. Through this process, methylmercury is destroyed naturally in lakes by reacting with ultraviolet (UV) and visible light photons.

Photodemethylation uses energy from the sun (hÎ½) to break the bond between the carbon in the methyl group (H3C) and the mercury atom (Hg) within a dissolved organic carbon (DOC) complex. This destroys toxic methylmercury and leaves a less toxic form of mercury (Hg2+) and DOC.

That seems pretty straightforward, but not so fast! Some lakes and rivers are very brown and if you have ever been paddling in these waters, you might have noticed that your paddle seems to disappear as soon as it cuts the surface. This is because the dissolved organic carbon in the water is really good at absorbing the UV rays and pretty good at absorbing visible light as well. Not all dissolved organic carbon is created equal, though; the arrangements of carbon atoms will differ depending on whether they come from trees, grasses, or algae. This means different carbon compounds and different amounts of these carbon compounds will absorb light differently, and can have a significant effect on the rate of methylmercury photodemethylation. Check out my recent publication on photoreactivity of dissolved organic matter affecting photodemethylation for the details. 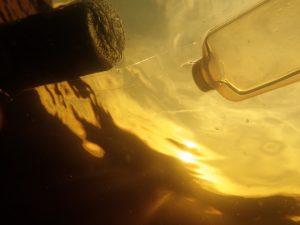 In Kejimkujik National Park, I have found that darker, high carbon lakes are less affected by photodemethylation and retain more mercury in the toxic methylmercury form compared to clearer, lower carbon lakes. When more dissolved organic carbon is present, it ultimately becomes a photon hog and outcompetes any reactions that might involve methylmercury. The situation is further complicated by the fact that the amount of dissolved organic carbon in my study lakes fluctuates throughout the year. Following spring melt, the concentrations of dissolved organic carbon are about half what they are in the fall. So, the effectiveness of photodemethylation depends on the season as well as the amount and timing of precipitation. Day length also varies greatly throughout the year at 43Â°N. This seasonality affects how much solar energy is available to fuel these reactions.

Climate change is predicted to alter precipitation and vegetation, which will likely increase the flux of organic matter into waterways and lead to the browning of many lakes. With a browning trend, the effect of photodemethylation will be reduced and more methylmercury may enter food webs, leading to more mercury contamination in remote ecosystems. While my research focuses on the photochemical nature and the efficiency of photodemethylation, I hope that what I have discovered will help predict the risk of methylmercury exposure to organisms now and in the future.