To understand the story of CRISPR-Cas9, you need to appreciate the significance of accidental discoveries in science. Imagine a world where Alexander Fleming did not discover a fungus capable of killing the bacteria on his forgotten bacterial plate. Or, imagine a world where Wilhelm RÃ¶ngten did not accidentally discover that x-rays can be used to photograph the inside of the human body. Now, imagine a world where a discovery for making better yogurt and cheese led to the development of one of the most robust genome-editing techniques known to biological research.

This is the story of CRISPR-Cas9. It begins with the age-old battle between viruses and cellular life. Since making good cheese and yogurt depends on the health and vitality of bacterial cultures, the dairy industry needs virus-resistant bacteria.

Enter Dr. Sylvain Moineau, a prominent scientist in the field of bacterial viruses (also known as bacteriophages), and Professor of Biochemistry, Microbiology and Bio-informatics at Laval University. Since 1996, he and his group at Laval University, along with colleagues in the dairy industry, have been studying how bacteria become immune to viral infections.

This is the story of CRISPR-Cas9. It begins with the age-old battle between viruses and cellular life.

Through pioneering studies, they experimentally demonstrated that CRISPR (Clustered Regularly Interspaced Short Palindromic Repeats), gave bacterial cells adaptive immunity against viral infections. According to Professor Moineau’s research, the process is very similar to the way human beings acquire immunity through vaccinations. They both rely on prior exposure to a weak or defective virus.

So how is this immunity acquired? When bacteria first encounter a weak virus, CRISPR genes in the bacteria incorporate pieces of the invading virus’ DNA and ‘record’ them as special sequences called “spacers”. These spacers function something like a criminal mugshot, and are used to recognize hostile viruses.

When the bacteria have another encounter with the hostile virus, a small mobile molecule called crRNA is synthesized. The information of the “spacer” is carried on crRNA and serves as a postal code. The crRNA forms a complex with a protein Cas9. The crRNA scans the DNA of the invading virus and, using the postal code as a guide, finds the matching location. After it identifies the right site, Cas9 recognizes the DNA as foreign and breaks the DNA of the virus attackers by essentially chopping them in two and neutralizing the attack. 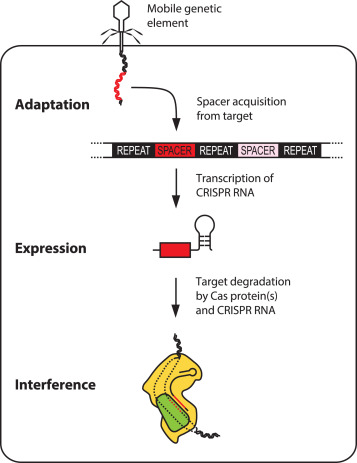 Our understanding of CRISPR-Cas9 has come a long way. At its heart, the system is composed of two components: an RNA guide molecule called crRNA and a protein Cas9. Professor Moineau likens crRNA to a GPS that scans the foreign DNA for the right location and Cas9 to a pair of molecular scissors that recognize and cut very specific sites on the target DNA. At this stage, the target cell tries to repair the damage, which can be exploited to add, delete or mutate genes. This is the secret to CRISPR-Cas9’s incredible versatility as a tool for genome editing.

By changing the postal code or the target information on the crRNA (the GPS), it is possible to change the target site of Cas9 (the scissors). In this way, the molecular mechanism of the CRISPR-Cas9 system can be exploited and its application extended to modifying and manipulating any gene in any organism. CRISPR-Cas9 provides a powerful method for studying genes whose function is unknown and allows the observable trait of any gene to be investigated and manipulated.

“But,” cautions Professor Moineau, “there are limits to the use of the technology.” One of the major limitations of CRISPR-Cas9 is its accuracy. The successful application of CRISPR-Cas9 depends on it accurately recognizing the target DNA, which it doesn’t always do, in the same way a postal code can reliably guide you to the general region, but is not sufficient to take you to the right house. When used in biological research, this issue of not finding the right target DNA sequence does not pose a big problem because there are numerous ways to check for inaccuracies and correct them. But when CRISPR-Cas9 is applied to human health, this inefficiency poses a greater threat.

Despite its limitations, CRISPR-Cas9 remains one of the most powerful and versatile genome-editing techniques in the tool kit of biological sciences. And it’s here to stay.

To think that it all started with a bowl of yogurt and a slab of cheese! Dr. Moineau succinctly echoes my own thoughts: “We set out the make better cheese and today we could possibly treat people.”