By Emma Christensen for the Nature Conservancy of Canada

I’ll never forget the first time I saw a cloud of little brown myotis bats flying in broad daylight at the coldest time of the year in January. There was something vaguely disturbing and peculiar about seeing them fluttering around against a backdrop of glittering snow. I was left wondering why these bats were flying around when they should be hibernating. It was a question that puzzled me for months and one I eventually put aside, unanswered, for years.

This memory returned to me during a recent conversation with Craig Willis, professor of biology at the University of Winnipeg.

“Out in wintertime, flying around?” he asked when I related my experience. “They’re sick.” 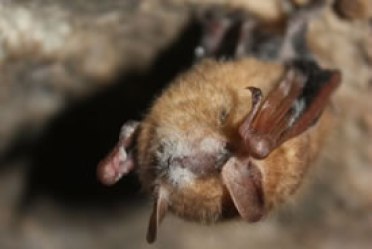 According to Willis, the bats’ unusual behaviour was most likely caused by an invasive fungal infection called white-nose syndrome.

Willis is a hibernation biologist and behavioural ecologist who studies the disease. Though white-nose syndrome still hasn’t reached Manitoba (it has reached as far as northwestern Ontario and was recently found on Canada’s west coast), Willis and his research team have been preparing for its arrival in the province for several years.

“In the field, we’re marking bats like crazy – we’ve microchipped 10,000 bats since 2008 in central Canada,” he says. “We now have enough data that we are starting to be able to estimate survival, [thanks to] a technique called mark-recapture.”

From each microchipped bat, the research team has collected tissue samples to capture genetic information. This data will help the researchers understand how certain individuals survive the disease. 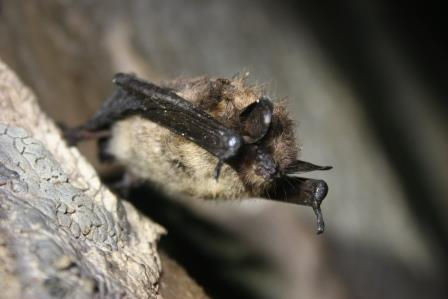 White-nose syndrome is a concern to bat populations because of its invasive nature and high rate of mortality. The disease is caused by the Pseudogymnoascus destructans fungus, which is widespread in Europe and has only recently arrived in North America.

“One of the things that makes our North American bats susceptible [to the fungus] is that they haven’t co-evolved with this particular pathogen,” says Willis.

White-nose syndrome was first detected in New York State in 2006 when a group of wildlife biologists conducted routine winter bat surveys. They were surprised to find cave floors littered with dead and dying bats. The remaining bats were infected with lesions and white fungal growth on areas of exposed skin, including their noses.

One of the biggest dangers to infected bats is that the fungal growth disrupts torpor, a state of slowed metabolism and lowered body temperature. Normally, torpor allows the bats to survive the winter by conserving their energy stores. Bats roused from this state by disease burn through their fat reserves so quickly that they risk death by starvation and dehydration. Up to 100 percent of a cave’s bat population can perish in a single winter. The impact on Canada’s bats has been devastating. Three of Canada’s bat species, including the little brown myotis, are now listed as endangered according to the Committee on the Status of Endangered Wildlife in Canada (COSEWIC).

It’s easy to get overwhelmed by statistics such as this one, but dedicated wildlife biologists and citizen scientists continue to seek out ways to monitor and support bats. Earlier this year, professor Willis and his team at the Willis Bat Lab installed heated bat boxes on the properties of homeowners with known bat colonies. The boxes, which plug into a wall outlet, provide a warm and secure roosting environment for female bats and their pups.

Concerned citizens can also get involved by reporting observations of bat colonies on the Neighbourhood Bat Watch website.

We have good reason to be concerned about bats’ survival. They serve important ecosystem functions in Canada and around the world, such as pollination and insect control. I’m aware of how valuable bats are to industries such as agriculture, but what is more important to me is their intrinsic value as our only true flying mammal.

I hope I won’t see little brown bats flying around this January, knowing that those who emerge in winter likely won’t see another spring. My backyard wouldn’t be the same without them.

*This post by Emma Christensen originally appeared on the Nature Conservancy of Canada blog, Land Lines on January 10, 2017. It is reproduced here with permission.

One thought on “Canada’s bats in crisis”