Dinosaurs always seem to excite people, whether it’s an actual discovery, like the tail vertebrae with feathers found this past December in Myanmar, or fictional stories, like Hollywood’s upcoming Jurassic World 2, rumoured to combine human and dinosaur DNA in the plot. But dinosaurs, which lived in the Mesozoic Era from 230 to 65 million years ago, did not roam aloneâ€“they shared the Earth with other animals such as fish (e.g. sharks), reptiles (e.g. crocodiles), and some egg-laying mammals (e.g. monotromes). Birds existed for part of this time as well but they are widely believed to have evolved from feathered bipedal dinosaurs called theropods, and so can be considered dinosaurs. Last year, while discussing dinosaurs and birds with Liz Martin-Silverstone for Science Borealis, we were surprised to learn about another prehistoric creature called the pterosaur that also lived during the time of the dinosaurs. Despite the fact that these animals could fly, they weren’t birds. And even though their name includes “saur”, they weren’t dinosaurs. Which raises the question, “What were they?”

Pterosaurs, dinosaurs, and birds are different animals but share similarities, much the same way cats and dogs are both mammals but are defined by their own unique features.

The name “pterosaur” is derived from the Greek words for “wing” and “lizard”, and these animals fall under the class of reptiles. Pterosaurs are a group of flying vertebrates, which are animals whose bodies contain a column of stiff pieces connected by mobile jointsâ€“like the human spine. Although people often think of them as flying dinosaurs, pterosaurs aren’t dinosaurs and they appeared almost 50 million years before flying birds. Pterosaurs, dinosaurs, and birds are different animals but share similarities, much the same way cats and dogs are both mammals but are defined by their own unique features. Martin-Silverstone explained that some of the things that make pterosaurs interesting include a “…unique bone on their wrist that helps to control the flight membrane. A pterosaur wing is very different from a bird wing. They are formed by one very long finger, their fourth finger. If you imagine that finger going a metre out, and then a membrane that connects that with their body, that’s a pterosaur wing. Pterosaurs also don’t have feathers, it’s really just this skin membrane”, similar to that of a bat. Although research initially indicated that pterosaurs were cold blooded, there is evidence that some pterosaurs might have had furry coats consisting of hairlike filaments, suggesting they might have been warm-blooded. 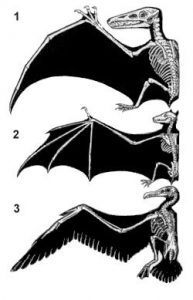 Figure 1. Anatomy of three different types of wing: (1) pterosaur; (2) bat; (3) bird. For pterosaurs, the extension of the fourth finger attached to a membrane creates a simple wing.
Image: John Romanes (1892: Darwin and after Darwin).

Pterosaurs are thought to have existed from the late Triassic period (228 million years ago) to the end of the Cretaceous period (65 million years ago), and their fossils have been found all over the world. Although their exact origins are difficult to pin down from a taxonomic perspective, significant diversity is observed among pterosaurs with scientists describing roughly 110 different pterosaur species to date. Variability in pterosaurs expresses itself in many ways: their overall size, and the size and shape of their wings, skulls, feet, legs, beaks, and even teeth. The wingspans of different pterosaurs are estimated to have ranged from as short as 25 centimetres up to 13 metres! 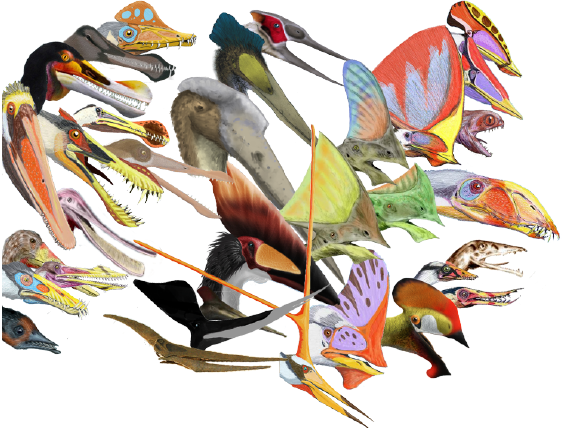 Most impressively, these ancient reptiles appeared to be capable of multiple modes of locomotion. Pterosaurs were skilled fliers with powerful flight muscles. It is estimated that they reached cruising speeds of roughly 90 kilometres per hour (km/h), even achieving speeds above 100 km/h for a few minutes. Some pterosaurs are also believed to have been able to swim, due to many of their fossils being found seaside, evidence of swim tracks, and some pterosaur diets consisting of aquatic prey. Despite their affinity for aquatic environments, research exploring pterosaur biomechanics suggests it is unlikely they were adept at simply floating on the surface of the water. They were also able to move about on land, with some species possibly even using all four limbs to walk, a hypothesis based on the fossilized terrestrial trackways of their foot prints.

Figure 3 Illustration of how some pterosaurs might have walked (left) and flown (right).
Pterosaurs may have even been able to swim (not shown).

Like many other prehistoric animals, pterosaurs also became extinct at the end of the Cretaceous period about 65 million years ago (often referred to as the Kâ€“T (Cretaceousâ€“Tertiary) or Kâ€“Pg (Cretaceousâ€“Paleogene) extinction).The popular Kâ€“T theory hypothesizes that the impact of an extraterrestrial object or volcanic event produced unsurvivable conditions. Although some dinosaurs (i.e. birds), reptiles, and fish were able to evolve and flourish, pterosaurs do not appear to have any living descendants. Experts believed that only large pterosaurs existed at the time (as it was assumed small pterosaurs were out-competed by birds) and, in general, large animals did not survive the Kâ€“T extinction. However, this may not be the entire story.

“Pterosaurs are just weird, and there is nothing that lives today that is closely related to them, so we have to figure out what on Earth they were doing.” — Liz Martin-Silverstone

Martin-Silverstone and her colleagues recently analyzed pterosaur fossils found on Hornby Island in British Columbia. Based on just a few pieces of fossilized bone that could easily fit in one hand, the researchers determined that the animal was an adult pterosaur from the late Cretaceousâ€“similar in size to a housecat, with a wingspan of roughly 1.5 metres. This finding suggests that small pterosaurs may have indeed existed around the time of mass extinction. Pterosaur fossils are rarer than those of dinosaurs or birds, partly because their bones don’t fossilize well as they were hollow to decrease their weight. Furthermore, there are no fossils of young (and therefore small) pterosaurs from the late Cretaceous. So it seems that the lack of small pterosaurs â€“ young or adult â€“ could be related to the challenges of fossil preservation as opposed to them not existing at that time.

Figure 4. Maps showing the location where the fossilized bones were found on the left, and a photo of the actual pieces on the right.
From Martin-Silverstone et al., 2016, Royal Society Open Science

Martin-Silverstone says, “Pterosaurs are just weird, and there is nothing that lives today that is closely related to them, so we have to figure out what on Earth they were doing.” She adds that, “the next big part of pterosaur research needs to focus on pterosaur biomechanics and looking in more detail at exactly what these animals were capable of. Some studies have been done in the past, but with the advancement in technology and imaging, more detailed studies and simulations can be done so we can really understand what these animals were doing.”

One thought on “It’s not a bird, it’s not a plane, it’s not even a dinosaur… it’s a pterosaur!”