Growing up across the street from the Queen Elizabeth Way, a busy highway outside of Toronto, Ainslie Butler’s mother often worried that the noise and pollution would affect her family’s health. Highway dust, as her family called it, left its grungy mark on their patio furniture. There were noise barriers, but traffic still hummed persistently and sometimes they were startled by honks and crashes.

A new study* suggests Ainslie’s mother might have been right, at least in the long-term. Canadian researchers, led by Hong Chen at the University of Toronto, found that people who live near major roads have higher rates of dementia.

The findings, published in The Lancet, show that living less than 300 metres from a primary urban road or highway increased the risk of developing dementia. This risk increased the closer to major roads people lived. In Ontario, 19 percent of residents live within 50 metres of a major road. Nearly half live within 200 metres. 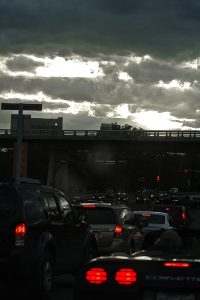 In Ontario, 19 percent of residents live within 50 metres of a major road. Nearly half live within 200 metres.

The researchers looked at about 6.6 million Ontario residents between 2001 and 2012 using health administrative data to identify individuals who developed dementia, Parkinson’s disease or multiple sclerosis. This was the first study to look at these diseases in the context of proximity to major transportation routes. No association was found between living near major roads and Parkinson’s disease or multiple sclerosis.

However, up to 11% of dementia cases in people who live near major highways could be related to traffic, the findings suggest. The risk was consistent across ages and genders, and among neighbourhoods with different levels of income, education, employment, obesity, physical activity and smoking rates. The study did not consider individual characteristics, only neighbourhood trends.

Why would living near major roads affect the brain? Previous research suggests that air pollution (e.g. from traffic) may lodge in the brain and potentially make brains age faster. In this new study, the researchers used satellite observations to measure the levels of two major pollutants, nitrogen dioxide and fine particulate matter, that residents were exposed to. They reported that exposure to each of these pollutants was independently associated with dementia, and that exposure to fine particulate matter was also associated with Parkinson’s disease.

This study also suggests that as more Canadians move into cities, urban planners need to think carefully about how to protect citizens from the health effects of busy urban life. In fact, in a commentary on the U of T study, experts Lilian CalderÃ³n-GarcidueÃ±as and Rodolfo Villarreal-RÃ­os of Mexico call for preventive measures now to reduce the effects of traffic exposure to health. Options include ensuring that housing is far enough from major roads and incorporating green space in residential areas as a buffer between houses and cars. Some cities, such as a Barcelona, Spain, have created superblocks – groups of up to nine blocks that are mostly closed to traffic – where pedestrians can roam on quieter and cleaner streets.

The solutions are complex and not always clear, but the evidence for protecting peace and quiet is mounting fast.