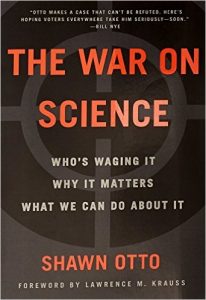 The War on Science: Who’s Waging It, Why It Matters, What We Can Do About It , Shawn Otto

Three factors influence the perception of science in our era: the notion that “all opinions are equal”, the political influence of the religious right, and effective scientific misinformation campaigns by select industries. Because of these factors, it doesn’t matter that we are no longer in the Bush-era or the Harper-era: the war on science is on going.

American author Shawn Otto develops this thesis in his book The War on Science. Through almost 600 pages, Otto outlines the extensive political and historical background for a general downturn of how the public views science. Ultimately, he says, it’s not just science that has been under attack in the last 40 years; it is democracy itself.

If all opinions are equally valuable and valid, then how can anyone discount ideas from people like Donald Trump?

Otto is the co-creator of the Science Debate initiative, which tried to spark a science conversation between the U.S. presidential candidates in 2008. Within weeks, a petition had collected 40,000 signatures, and the initiative gained the support of nearly all of the major U.S. scientific associations.

Even though the petition didn’t result in a televised ‘science’ debate in the U.S., it did inspire questionnaires about scientific issues to be sent to political candidates. Building on these efforts, last year a list of 20 questions about scientific issues was sent to each presidential candidate. Otto also offers a suggested list of science questions to ask candidates in his book.

…it’s not just science that has been under attack in the last 40 years; it is democracy itself.

But Otto’s book goes well beyond science debates. Given our negative trajectory over the last 40 years, (the religious right, industry misinformation and a tendency to see “science” as an “opinion”), he puts forward a worst-case scenario—a return to authoritarianism, in which our thinking is “rigid, [and] paralyzed,” and we are “no longer able to control our destiny or even to discern the trajectory of our downfall.”

The scientific community is not blameless in this evolution: the priority placed on academics to “publish or perish” has accelerated the volume of academic output, but has simultaneously increased the distance between academia and those outside the ivory tower. Too many “blunders”—DDT, acid rain, asbestos, tobacco, the ozone layer, Vioxx, atrazine, lead paint and more— have created the feeling, in the baby-boomer generation, that science can be “bought” by industry. Science became, for many of them, just another self-interested lobby group.

At the moment, scientists are “losing the debate because they don’t understand the terms of the battle.”

This is where the concept of postmodernism (or moral relativism), as the concept is called in the social sciences, is finding fertile ground. Since the 1970s, some intellectuals have argued that science is just one opinion amongst many—an elitist and arrogant “interest group”. One tangible consequence of this line of thinking is the education boards in the U.S. willing to suggest that “evolutionism” and “creationism” are two “opinions”— a position that some presidential candidates did not protest.

Until the 2000s, scientists were largely oblivious “because of their social and civic disengagement,” Otto says. One solution, then, is to re-engage scientists. At the moment, scientists are “losing the debate because they don’t understand the terms of the battle.”

Of course, it is not just scientists who are responsible for the current crisis. The media are at the forefront of the “all opinions are equal” doctrine and often present pros and cons on equal footing. Science journalists who avoided this trap were often marginalized. Cuts in mainstream science news coverage, embodied by a reduction in weekly science sections in American newspapers from 95 papers in 1989 to 19 in 2012, has come at a time when science needs coverage more than ever.

The media are at the forefront of the “all opinions are equal” doctrine and often present pros and cons on equal footing.

And, on top of that, the influence of talk radio grew exponentially 1990s and 2000s. “Anti-science news media”, including these radio talk shows, cable news channels and the Internet, enabled the most dogmatic advocates of any opinion to disappear into an echo chamber where they only hear what they want to hear.

Otto’s second factor, the growth of the evangelical religious right in the U.S., may not resonate as much among Canadians. But that cannot be said of the third factor to the war on science. From tobacco to oil, through alliances between industry, governments, and public relations firms, companies were able to use to their advantages to foster the public distrust of science and exploit the journalistic culture of ‘balanced reporting/equal opinions’.

“The postmodernists”, Otto writes, “saw all science as a kind of public relations campaign by the elite. Ironically, they have prepared the ground for precisely such a campaign, led by the anti-science forces.”

War on Science was not written to encourage doom and gloom. The author’s extensive research is enlightening for those who, in recent years, have felt discouraged by the anti-science sentiments that seem to be on the rise.

Otto doesn’t offer a miracle solution, but a collection of complementary options. He shows that, to counteract a long-term attack like the one on science, we should work simultaneously on multiple fronts. Researchers, media, concerned citizens, and politicians will need to ally themselves and work toward common goals.

At a time when everyone can find like-minded arguments on the Internet and retreat into their own truth, we need to find ways to break through the echo chamber and begin a real dialogue that will solve our problems.

For example, alliances could push political candidates to sign a “science pledge” and hold debates, even on a municipal level. Alliances can also encourage fact verification efforts such as PolitiFact in the U.S. or the Detecteur de rumeurs in Quebec.

Forge alliances, encourages Otto, such as those that led to the mega-march on climate in New York in 2014. Push your science students to be more visible in public. Use the courts against the oil companies who lied to the public, as was done in the war on tobacco.

Otto argues that we must fight the idea that truth is subjective, one of the basic tenets of postmodernism. Scientists still seem to underestimate the influence of this concept. Because if everybody believes that we live in a world where all opinions are equal, why discuss, criticize and seek compromise? At a time when everyone can find like-minded arguments on the Internet and retreat into their own truth, we need to find ways to break through the echo chamber and begin a real dialogue that will solve our problems.

A version of this post was originally published in French in the Montreal daily Le Devoir.

3 thoughts on “The war on science”