When was the last time you had the stomach flu, had your wisdom teeth removed, or had an ear infection? Most likely, you received an antibiotic, a type of antimicrobial drug designed to either prevent or treat bacterial infections. Alexander Fleming’s initial discovery of penicillin in 1928 brought forth a new era in modern medicine as a host of antimicrobial drugs were developed against all types of microbes (i.e., bacteria, fungi, viruses, and parasites). What were once life-threatening medical emergencies thus became routine visits to the doctor’s office to pick up a familiar prescription.

Canada has several government initiatives ongoing to combat this issue. All initiatives are founded on a “One Health” approach, which recognizes the combined impact of people, animals, plants, and our shared environment. Public education campaigns such as Do Bugs Need Drugs? have also been successful at spreading awareness.

How does antimicrobial resistance arise?

How do microbes become resistant to antimicrobials? How did we get from Fleming’s initial revolutionary discovery to the current crisis?

There are many different mechanisms through which microbes evade the effects of antimicrobial drugs. There are four main mechanisms of resistance: limiting how much of the drug can enter the bacterial cell, changing the drug’s target so the drug cannot bind, inactivating the drug, and removing the drug from the inside of the bacterial cell. We can focus on the most common resistant bacterium, methicillin-resistant Staphylococcus aureus (MRSA), to learn more about how resistance works. This resistant bacterium can cause serious infections at burn sites, surgical sites, and in the blood, urine, and lungs and is especially prevalent in hospital settings. 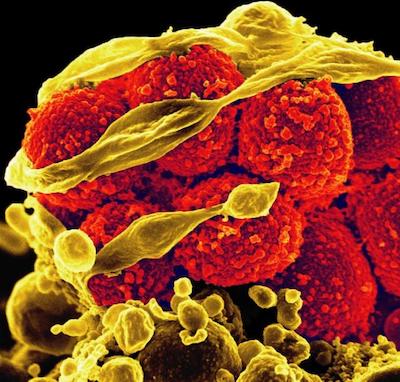 However, MRSA’s mechanism of resistance involves a version of the penicillin-binding protein to which methicillin does not bind well. Therefore, although treating Staphylococcus aureus infections with methicillin eliminates a majority of the bacteria, the MRSA “superbugs” can survive, replicate, and spread.

The development of resistance mechanisms, like the altered penicillin-binding protein, can occur naturally over time through random mutation. In addition, bacteria can pass instructions to build resistant proteins on to other bacteria through the transfer of small loops of DNA known as plasmids.

The most significant contributing factors to the rise in antimicrobial resistance are the overuse and misuse of antibiotics in humans and animals and the contamination of the environment with antibiotics. The more we use antibiotics and expose microbes to our drugs, the more we select for resistant bacteria.

A question comes to mind: if microbes are learning to evade our drugs, can’t we just develop new drugs? The answer is yes, but not fast enough.

Why is discovering new antibiotics so complex?

No new classes of antibiotics have been discovered since the 1980s, and all of the antibiotics that have been brought to the market since then are variations of previous drugs.

To find substances that eliminate microbes without being toxic to humans, thousands of potential natural and synthetic antimicrobial substances must be tested. It can take 15â€“20 years and over $1 billion to develop a single new antibiotic from initial discovery, through clinical trials, all the way to regulatory approval and market release.

There is little incentive for pharmaceutical companies to invest that level of resources, considering they are unlikely to recoup their investment. In 2020, there were 43 novel antibiotics in clinical development. Of the 38 different companies working to develop these drugs, only two rank in the top 50 largest pharmaceutical companies, meaning that 95 per cent of this research is conducted by small biotechnology companies who are committed to fighting antimicrobial resistance. However, many of these small companies are funded through credit and government grants and therefore have limited resources. With the high failure rate for novel drug development, the current rate of discovery and development will not be sufficient to combat antimicrobial resistance. 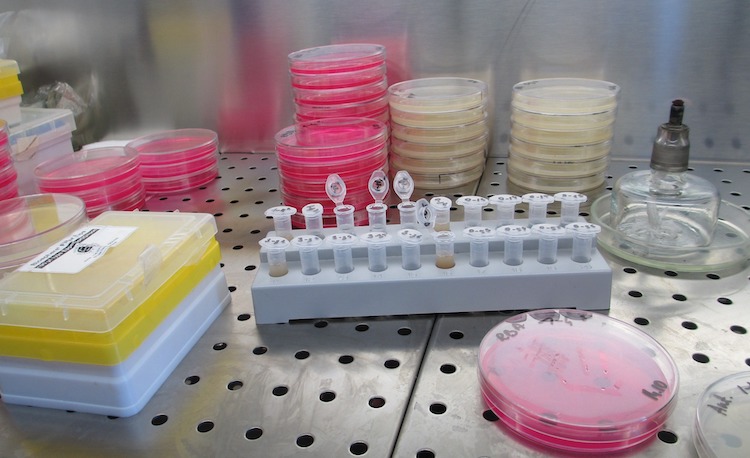 Novel drug discovery is a slow and complicated process with a high failure rate. Photo by Sansiona from Pixabay.

Antimicrobial stewardship is crucial to fighting the silent pandemic.

We cannot wait for new antibiotics to be developed. It is crucial that we carefully preserve our existing drugs through antimicrobial stewardship. Antimicrobial stewardship is the effort to promote optimal prescription and use of antibiotics by physicians and patients, respectively. Physicians learn to use antibiotics during their training and tend to stick to the same pattern of prescribing throughout their career, even if what they initially learned is now considered overuse. Furthermore, sometimes patients request antimicrobials, and physicians comply.

Decision support apps are an example of innovative stewardship tools. The Firstline â€“ Clinical Decisions app was launched in 2016 by a Vancouver-based developer, Spectrum Mobile Health Inc., in collaboration with infectious disease researcher Dr. John Conly at the University of Calgary. It has been implemented in hospitals across Canada to provide healthcare professionals with optimal prescription guidelines, pathogen data, infection prevention-and-control protocols, and other information useful for mitigating antimicrobial resistance.

Researchers at the Memorial University of Newfoundland recently conducted a study on the impact of this tool in two hospitals in St. John’s. Daniel Doyle and his coinvestigators observed improvements in antimicrobial stewardship indicators following implementation of the Firstline app, including a decline in inpatient antimicrobial usage and an increase in the appropriateness of prescriptions.

A similar tool was released last month for veterinarians to optimally prescribe antibiotics for animals, through a collaboration with Firstline â€“ Clinical Decisions, the Canadian Veterinary Medical Association and the Stewardship of Antimicrobials by Veterinarians Initiative, again led by Dr. John Conly. This is one of the first stewardship support tools to facilitate antimicrobial prescribing for veterinarians. Superbugs can also arise in animals due to antimicrobial overuse, misuse, or environmental contamination, and these superbugs could potentially infect humans. Therefore, stewardship solutions that extend beyond humans are important.

Decision support tools such as these have the potential to have a global impact on antimicrobial resistance by making optimal prescription guidelines easily accessible and understandable to physicians and veterinarians worldwide.

We are all antimicrobial stewards

These initiatives are only a part of the battle. We are all antimicrobial stewards. It is up to everyone to participate in the fight against antimicrobial resistance.

How can YOU prevent antimicrobial resistance? To limit misuse, always seek medical advice when you are ill, take antimicrobials only when prescribed, and complete the full treatment regimen as prescribed. To prevent infections, always stay up to date with vaccinations, and wash your hands consistently.

The objectives of World Antimicrobial Awareness Week need to be a year-round effort. Let’s spread awareness and stop resistance.