A mysterious disease is creeping its way into Saskatchewan, and its diagnosis remains complicated and unstandardized. Lyme disease, a tick-borne bacterial infection, is spreading westwards and northwards into the province of Saskatchewan. The spread is due in part to climate change, which is increasing the range, abundance and activity of the rodent, bird, and deer hosts that carry the bacteria within their tissues.

Assistant Professor of Veterinary Microbiology Dr. Maarten Voordouw and his team at the University of Saskatchewan’s Western College of Veterinary Medicine are seeking to understand how the bacteria that cause Lyme disease are transmitted from its primary animal hosts to ticks in one of their current studies. Their investigations into the disease’s ecology may lead to improved understanding of how the spread of the disease among animals might be controlled, improved therapeutic treatment of the disease in humans, and possibly even the development of a reliable method for diagnosing Lyme disease.

About Lyme disease and the ticks that spread it 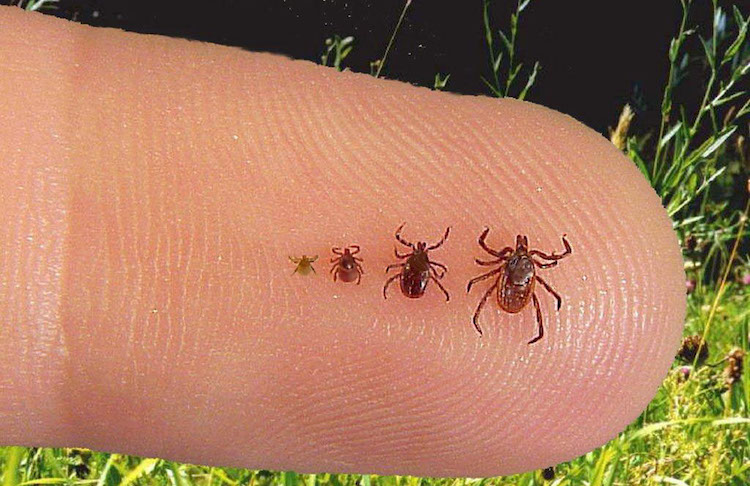 Ticks vector Lyme disease, spreading it from host to host as they mature through their different life stages (shown here). Photo by California Department of Public Health, CC-BY-NC

Lyme disease is caused by the bacterium Borrelia burgdorferi, but it is spread, or vectored, by blacklegged ticks (Ixodes scapularis and Ixodes ricinus).

Blacklegged ticks spread to new territories by hitching rides on birds or other migrating animals. This can cause cases of Lyme disease to emerge in any province of Canada, even those where the disease is not endemic. Once there, the ticks leave their wide-ranging hosts and seek out other hosts to complete their lifecycle.

Ticks themselves are not actually born with Lyme disease. They catch it by feeding on infected animals as larvae. When the tick becomes an adult, it can then pass the disease on to its next host. New larvae subsequently attach to the infected host, beginning the cycle anew.

Lyme disease was discovered in the United States only in the 1970s and is named for Lyme, Connecticut, the town where the illness was first noted. Each year, some 30,000 cases are reported to the U.S. Centers of Disease Control, but some estimates suggest that as many as 475,000 people may get Lyme disease each year in the United States.

In Canada, Lyme disease is the most common vector-borne disease among humans, with about 1,500 cases reported in 2018. Most Canadian cases occur in Ontario, Quebec and the Maritimes. For people living in non-endemic regions, the risk of catching Lyme disease is rare but not impossible. 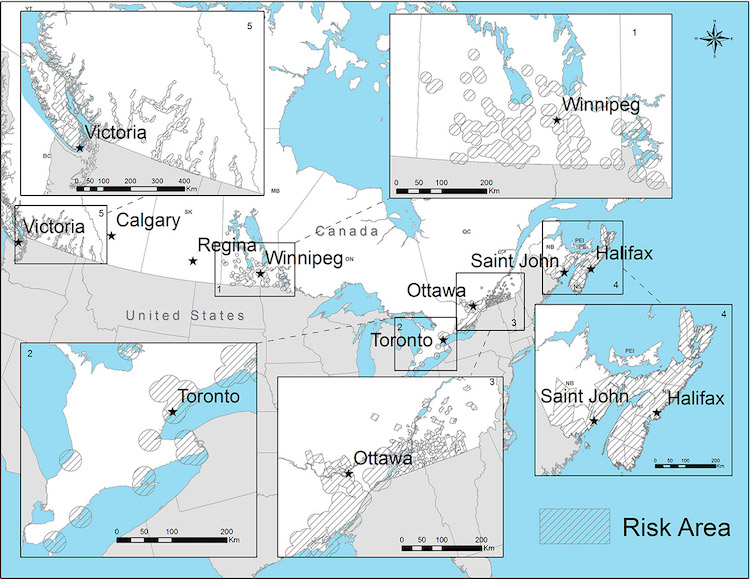 Lyme disease risk areas in Canada where tick populations and Borrelia burgdorferi are known or most likely to occur, as of 2016. Map, Health Canada, used with permission https://www.canada.ca/en/public-health/services/diseases/lyme-disease/risk-lyme-disease.html

However, even in regions where Lyme disease is established and common, diagnosis remains problematic. 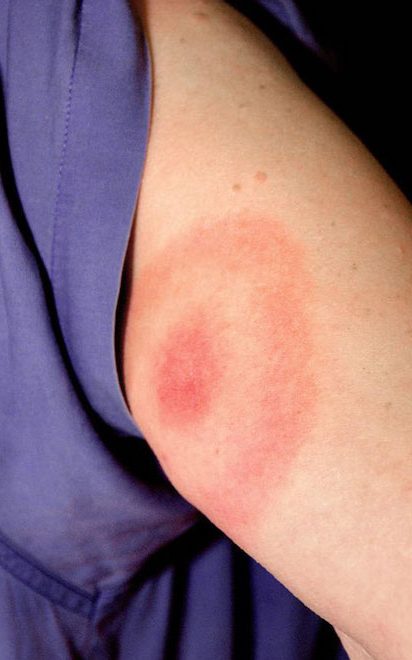 Lyme disease is most commonly diagnosed either by testing the ticks found biting people or by the typical bull’s eyeâ€“shaped rash that occurs in about 70 to 80 per cent of cases.

Symptoms of Lyme disease are often cryptic, resembling those of other, more common conditions. It is most commonly diagnosed either by testing the ticks found biting people or by the typical bull’s eyeâ€“shaped rash that occurs in about 70 to 80 per cent of cases. Issues with diagnosis arise when the rash is absent or when people don’t notice they have one.

No standardized test for diagnosing the disease exists at this time. The procedure used most often tests a blood sample for antibodies against the disease. This is ineffective early in the course of infection, because antibodies take time to develop. In addition, healthy or recovered individuals living in endemic areas often have high levels of Lyme disease antibodies in their blood without an active, current infection. This can cause a high rate of false positives for the test and prompt treatment for a sickness some individuals don’t currently have.

Treatment can also be tricky. Those diagnosed early have the best odds for recovering when treated with the appropriate antibiotics. Treatment becomes much more complicated for those suffering from late-stage Lyme disease, where treatment of nervous, heart, and arthritic signs can be required. 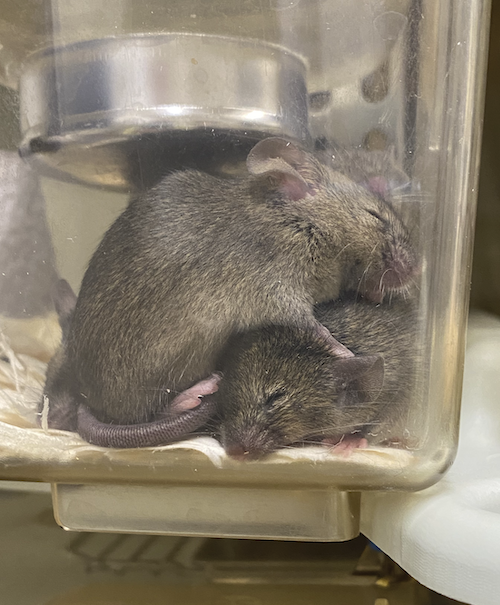 White-footed mice, like these in Dr. Voordouw’s lab at the Western College of Veterinary Medicine, are common reservoirs for Lyme disease. Photo by Brooklyn Bourgeois, used with permission

Better understanding of the transmission of Lyme disease could lead to developing new and more effective ways to control and diagnose this disease. That is why DVoordouw and his team are researching the interaction between the Lyme disease pathogen, ticks, and white-footed mice, which are common reservoirs for Lyme disease.

Specifically, the researchers are seeking to better understand how the Lyme disease pathogen passes from the mouse host to the tick. The number of Borrelia bacteria in the skin of mouse hosts has been linked to increased transmission from host to tick, so the team is looking into how a mouse’s immune system controls infection in the animal’s skin.

Pathogens tend to remain in tissues that facilitate its transmission. With Lyme disease remaining in the skin and ticks biting their hosts to obtain nutrients, the disease is more likely to pass from the tissues to the tick.

The researchers are also using ticks, not needles as is used in many Lyme disease studies, to infect the mouse subjects, because tick saliva has been shown to play a major role in the outcome of the Lyme disease infection.

By using clobetasol, Voordouw’s research team hopes to demonstrate that the mouse immune system is effective against the bacteria.

“It is actually doing things to control [Lyme disease],” Voordouw says. “It’s just not happening to clear the infection.”

And this, he says, challenges our typical definition of therapeutic success.

“I think we tend to see success as ‘You got to get rid of the infection’, and only if you clear the infection then that’s success,” he says. “But success can mean different things. If you can bring the infection under control to the point where the pathogen is not doing much damage to you anymore, maybe you can live with it.”

Maybe, he says, that is also a kind of success.

“A basic understanding of ecology of many diseases, including vector-borne diseases, is key for our ability to control them,” Voordouw says.

By improving our understanding of Lyme disease ecology, more effective control and diagnosis of the disease might eventually be developed.

For example, if the use of steroids is shown to reactivate the Lyme disease bacteria in infected skin, that could lead to the potential use of skin biopsies to directly detect whether Lyme disease is present in future diagnoses in humans. Such conditions could allow direct diagnosis by quantitative polymerase chain reaction (qPCR), a technology for measuring DNA amounts with PCR. An approach like that would resolve many of the current diagnostic issues with Lyme disease.

Western College of Veterinary Medicine student Brooklyn Bourgeois wrote this article as part of Science Borealis’s Summer 2021 Pitch & Polish, a mentorship program that pairs students with one of our experienced editors to produce a polished piece of science writing.