The Thirty Metre Telescope (TMT) project is exactly what it says on the box: a telescope with a staggering 30 metre segmented lens, housed in an 18-storey observatory in the very early stages of construction on Mauna Kea, Hawai’i. If built, the TMT will be the largest telescope in the world, and the enormous lens will give it the power to peer further out into the cosmos than we’ve ever been able to before. Astronomers will be able to observe the cosmos with better resolution and precision than current telescopes allow, opening up a staggering array of research topics in astrophysics and astronomy. 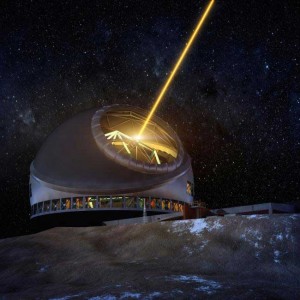 Mauna Kea is a prime location for astronomy: as the tallest mountain in the Pacific, the air is dry and generally clear, and there is little regional light pollution. These conditions have already resulted in the construction of thirteen telescopes on the mountain since 1968. However, indigenous Hawai’ians regard Mauna Kea as a holy site, with the telescopes speckling the mountain located on sacred ground. Though the TMT consortium followed an extensive legal process to gain approval for the site, which was granted in 2013, Hawai’ian groups have filed court cases alleging that the environmental assessment is flawed and insufficiently rigorous, and that the project contradicts statutes from a previous case.

A letter sent to the governor of Hawai’i in January by one of the groups opposing the TMT reads, in part: “The NASA FEIS findings concluded: “That the cumulative impact of thirty years of astronomy development atop Mauna Kea has resulted in ‘substantial, adverse and significant’ impacts to the cultural and natural resources of Mauna Kea”…The NASA environmental findings mean that neither TMT nor any other development can be approved without being in violation of the Mauna Kea Conservation District (MKCD) rules and regulations. Namely HAR Â§13-5-30(c)(4) “The proposed land use will not cause substantial adverse impact to existing natural resources within the surrounding area, community or region”. ”

Canada has been a part of the TMT project for several years, but didn’t formally commit funds until earlier this month when the federal government promised $244 million to the project, thus ensuring that Canadian researchers will have access to the telescope and the data it generates. But it will all be for naught if the project is unable to proceed.

Ground was broken on the TMT last October, and construction began in earnest in late March. Though there have been protests since the ground-breaking, protectors of Mauna Kea have been particularly active in the past month, as construction ramped up shortly after the commitment of Canadian funds. Construction ceased on April 7th, after 31 people were arrested for preventing construction crews from accessing the site.

On April 30th, the Office of Hawai’ian Affairs (an independent government agency that covers indigenous affairs in Hawai’i) formally rescinded support for the TMT, citing new information about the management of Manua Kea (including the TMT) that has come to light in the past few years. Board member Peter Apo said “This was an opportunity I think for us to try to hit a reset button, and begin to review and take another look at the public trust responsibility that the state has to Hawaiians and walk that trail again.” There are ongoing discussions between the Hawai’ian groups, government, and the TMT consortium.

It’s abundantly clear that if the TMT is built, it will be in spite of concerted opposition, and that makes for a difficult situation for astronomers to navigate. Balancing the potential bounty of information the TMT would provide while understanding that it was built on disputed land is not easy. Contrary to the stereotype of the cold, rational scientist, this series of tweets from Sarah Ballard illustrates just how important both the mountain and the telescopes (including the ones already there) are:

@IBJIYONGI @dalcantonJD @erinleeryan But then I considered– that would be a painful compromise similar to what we are demanding ourselves.

@IBJIYONGI @dalcantonJD @erinleeryan It just made me realize what an illusion it is to posit astronomers as the “dispassionate” ones.

Many of the leaders of the TMT consortium are angry about the backlash against the telescopes. Unfortunately this has resulted in some unprofessional conduct from a few people, including an email circulated amongst the astronomical community characterizing the Hawai’ian protestors as a “lying horde.” The president of the American Astronomical Society (AAS) wrote a letter to the community denouncing the use of racist language, and affirming that the community should be welcoming to astronomers of all identities. It’s good to see the AAS president firmly supporting an inclusive environment, but that these emails were sent at all indicates that there is still work to be done to make her assertion a reality.

These emails and this conflict shines a bright light on how unwelcoming the scientific community can be for indigenous and minority scholars. It is difficult to find statistics for Canada, but the NSF reports that out of 207,000 people employed as science and engineering faculty of all ranks, just 700 are indigenous. In both the US and Canada, there are often few or no indigenous role models for undergraduates and high school students to look to for help finding a path in the academy. Conflicts like the TMT have a profound impact on how the scientific establishment is seen by indigenous communities, and that has a lasting impact both on would-be indigenous scholars and how future scientific endeavours that involve or impact aboriginal people are considered. Diversity in STEM means actively welcoming and supporting a multitude of perspectives and worldviews, rather than allowing those diverse peoples only so long as they hew closely to the traditional Western approach to science and the natural world. Keolu Fox, a Native Hawaiian scientist, wrote a powerful essay about approaching science from an indigenous standpoint, and he lays out the colonial history that underpins the telescopes’ construction.

There’s no dispute that, if built, the TMT will generate extraordinary data and provide a fascinating window into the deep cosmos. But while there are already several telescopes on Mauna Kea, that doesn’t mean that adding the TMT is right. Past wrongs do not justify current actions, and it is extremely difficult to compromise on a project which, by design, must be a specific, enormous size. The Hawai’ian protectors insist that they’re not opposed to astronomy or telescopes, just the placement of telescopes on Mauna Kea. But just because we technically can build something doesn’t mean we should, and it certainly doesn’t mean that it comes without a human cost. And who, exactly, is included in that “we?”

The potential danger of pushing ahead with the project despite Hawai’ian opposition is very clearly laid out in Ben Lillie’s recent Slate essay on culture, ritual, and science. Science is as beholden to culture and context as any other human endeavour, and this is never clearer than when a scientific project collides with a different culture. The TMT is not a clear cut case: there are benefits and costs whether or not the telescope is built. But ignoring the cultural context for the fallacy of an objective scientific stance does tangible harm to the indigenous Hawai’ians calling for the TMT to be scrapped, to indigenous and minority astronomers, but also to the continued growth and progress of the scientific endeavour and how it is perceived – and trusted – by the public.
———————————