Now that cannabis has been legalized, Canadians don’t have to hide their stash. But dog owners need to be aware of the dangers that cannabis can pose to their pooches. Research shows that dogs are more sensitive to cannabis than humans. Specifically, dogs are harmed by delta-9-tetrahydrocannabinol (THC), the main psychoactive component of cannabis. Consuming even a small amount can be dangerous, particularly for small dogs. This is especially true for recreational cannabis, which typically has higher THC levels than medical marijuana, although both can pose a serious risk to a dog’s health.

Accidentally eating cannabis can lead to serious illness for your dog. Dr. Jen Gunter from California shared the story of how her dog Hazel became ill from cannabis poisoning from resin that she suspects the dog found in their local park. And her story is not unique. A family in Ottawa recently told a similar story, with their dog getting sick after eating some cannabis while on a walk in their neighbourhood.

In the summer of 2018, prior to cannabis legalization, one veterinarian in Newfoundland and Labrador reported that her clinic was already treating at least one dog per week for cannabis toxicity, and a veterinarian in Nova Scotia reported an increase in the number of animals coming to the clinic with cannabis poisoning. A five-year study in Colorado reported a four-fold increase in the number of dogs poisoned by cannabis since it was legalized there in 2014. 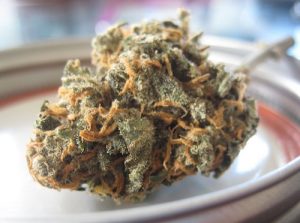 The psychoactive chemical compounds in cannabis, THC and cannabidiol (CBD), interact with cannabinoid receptors (mostly CB1 and CB2) in dogs, the same as they do in humans. The important difference, though, is that dogs are believed to have many more CB1 receptors in their brains, which makes them much more susceptible to the effects of THC.

Many dogs have a reputation for eating anything they can find that smells interesting: garbage, poop, chocolate, your dinner. It’s not surprising that dogs might also seek out and gobble up cannabis litter in public places or your personal stash at home, especially edibles such as pot brownies, which are doubly dangerous due to the toxicity of chocolate. If you are keeping cannabis in your home for medical or recreational use, make sure all your cannabis products, including discarded “butts”, are out of reach of your pets – just as you would with small children. Cats are also susceptible to the toxic effects of cannabis consumption, but are less prone to table grazing or other scavenging behaviour.

Signs of intoxication typically kick in about an hourafter a dog has been exposed. According to the Canadian Veterinary Medical Association (CVMA), signs of cannabis poisoning include dilated pupils, tiredness, depression, lack of coordination, excessive drooling, uncharacteristic barking and urinary incontinence (leaky bladder). In more severe cases, dogs can experience serious side effects including seizures, heart attacks and death.

A lethal dose of THC in dogs is an estimated three grams of THC per kg of a dog’s body weight. While the concentration of THC in cannabis can vary widely from strain to strain, a medium sized dog would have to eat at least a pound of regular-strength cannabis to reach this lethal dose. Fatal exposure is rare, but there have been several cases in the US of dogs who died after consuming butter infused with medical marijuana (cannabutter).

Non-fatal levels of poisoning can also have long-term consequences: dogs can injure themselves while intoxicated, or they can suffer from seizures or even cardiovascular damage. The CVMA has called for human cannabis products to include messages that promote user behaviour that protects the safety of animals.

Animals can also experience toxicity from second-hand smoke exposure, so it’s important to be careful around pets when smoking cannabis in enclosed spaces. Open a window or move your pet to another area to avoid inadvertently harming them. 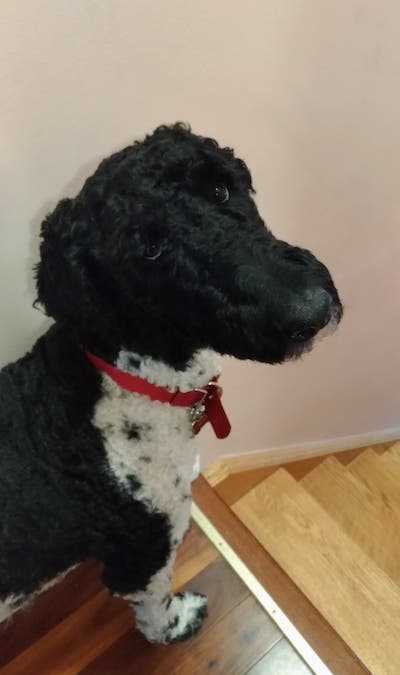 Jackson is a very good boy who lives with Science Borealis editor Tamara Rosner. He wants you to be careful about where you are keeping and discarding your cannabis. Photo from Tamara Rosner, used with permission.

If your dog (or cat) has been exposed to cannabis and has begun acting erratically or demonstrating other symptoms, it’s important to remember that your pet isn’t just getting “high” â€“ it’s being poisoned. If you think your dog may be suffering from cannabis poisoning, call or visit your vet as soon as possible.

Vets typically focus on treating the symptoms. This can include keeping your pet hydrated, administering anti-vomiting medication, monitoring their heart rate, confining them to prevent injury while they are unsteady and regulating their temperature to prevent overheating or cooling. Your veterinarian may also use activated charcoal to absorb the cannabis your pet ate to prevent further absorption of THC into its bloodstream.

Treatment for cannabis poisoning is generally successful, and most dogs recover fully within 24 hours. But everyone, including people without pets, should be mindful of where they are storing and discarding their cannabis products including edibles, dried plants, and the “butts” from their joints. As with everything else, prevention is better than a cure.

2 thoughts on “Cannabis is NOT a dog’s best friend”