From November 7 to 9, government researchers, policy-makers, academics, entrepreneurs, and science communicators met at the 10th annual Canadian Science Policy Conference in Ottawa, ON. This was an opportunity to share and discuss the major challenges and successes in Canada’s science policy landscape. Highlights of the event included talks by the Honourable Dr. Kirsty Duncan, Minister of Science and Sport, and Canada’s Chief Science Advisor Dr. Mona Nemer. The overarching focus of this year’s conference was building bridges between science, policy, and society.

Two hundred and sixty-seven speakers participated in 55 different panels. Each panel focused on the role of science policy in one of five broad fields: research, society, economic development, education, and international affairs. Here are some of the major ideas covered during the conference.

In a panel on science literacy in Canada, Dr. Maurice Bitran, CEO of the Ontario Science Centre, presented data from the centre’s recent survey that suggested that the public trusts scientists, but not science. Tackling this challenge was the focus of 13 panels throughout the conference. Dr. Sacha Noukhovitch, founder of STEM Fellowship, and Dr. Bonnie Schmidt, founder of Let’s Talk Science, discussed programs at their respective organizations that provide elementary-to-high school students with the chance to ask their own research questions, based on data generated by real-life scientists. Ontario’s Chief Scientist Dr. Molly Stoichet uses art to take scientific content outside of classrooms and into public spaces. This recently included an Artful Science installation at Pearson International Airport, that uses images from researchers across Canada. As with the STEM Fellowship and Let’s Talk Science programs, she hopes that passersby’s natural curiosity will spark their interest in research.

Attendees also had an opportunity to hear from Katie Gibbs, advocate for science and evidence-based decision-making at Evidence for Democracy. She promotes the use of objective data in policy-making, with a focus on policies affecting scientists. Her organization runs programs and campaigns that educate the public and scientists on relevant policy issues. Within the federal government, Dr. Nemer provides a voice for scientists, which can be particularly important with contentious issues that involve conflicting information from researchers. However, Dr. Nemer stressed that she is not a science advocate, because she does not push the government to include scientific data in their decisions. Rather, she ensures the information is there and utilized correctly when the government needs it. 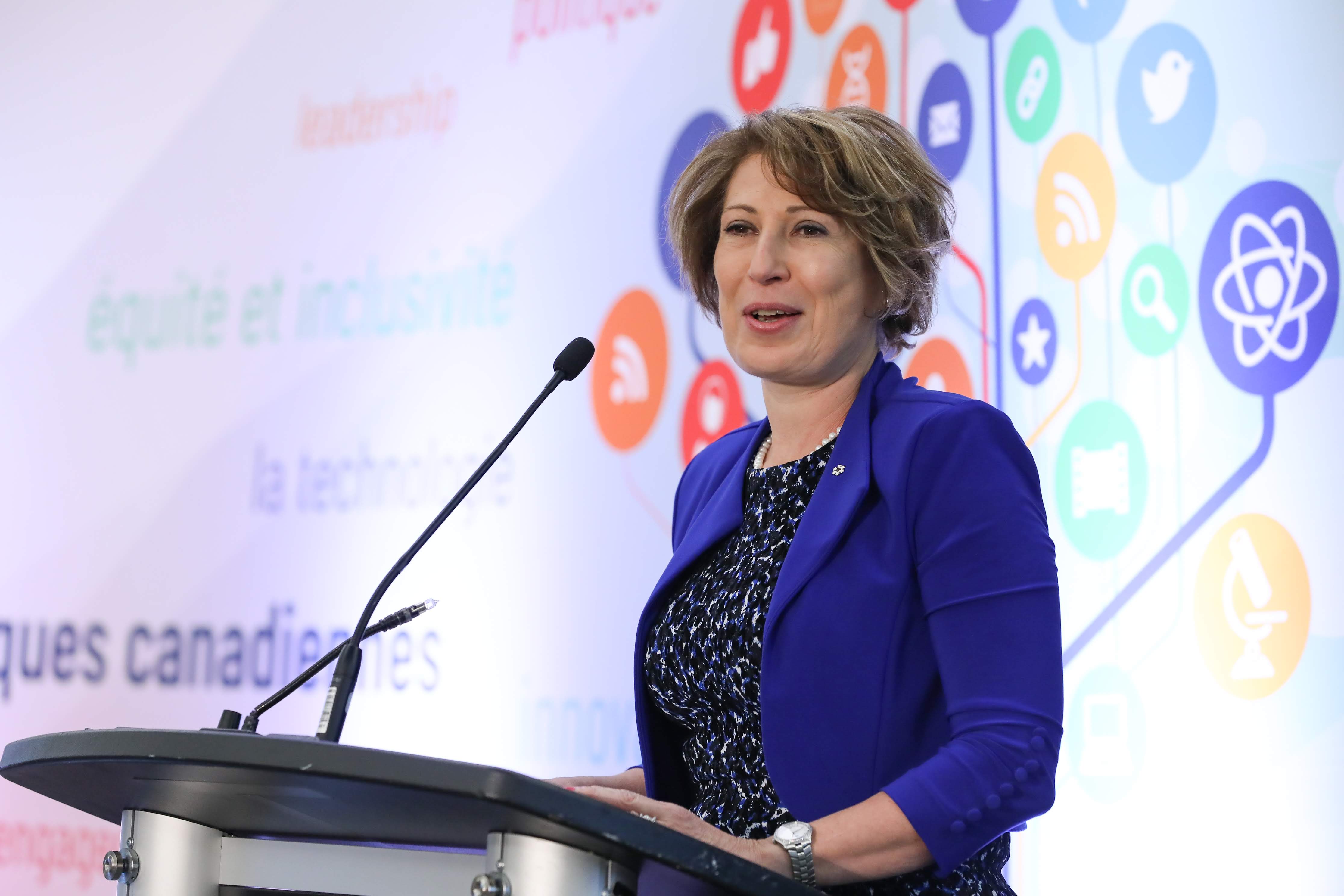 Researchers from Genome Canada and the University of British Columbia have led two separate research projects that successfully integrated social, legal, and biochemical research. Dr. Jaqcues Simard led Genome Canada in developing and implementing new screening methods for breast cancer, while Dr. Sally Aitken leads the CoAdapTree forest management program in B.C. They both stressed how difficult, but important, it was to communicate effectively with people with various scientific or policy backgrounds. During an entertaining panel discussing how researchers can reach out to the public, science communicator Anthony Morgan highlighted one way this can be achieved. By having audience members participate in a ‘Freestyle Social,’ he demonstrated how important it is to explain the reasoning behind a viewpoint, for example: ‘Vaccinations should/should not be mandatory.’ This can help reduce the hostility and lack of calm sometimes associated with sensitive issues.

Participants take part in a Freestyle Social during the panel: ‘Who speaks for science?’ Â© Canadian Science Policy Centre

Seven panels discussed initiatives by the government and researchers to involve communities directly impacted by their research into the design and implementation of their projects, through participatory or citizen science. In a panel focused on the role of funding agencies in participatory research, Serge Marchand, directeur scientifique of FRQS, Quebec’s major funding agency for health research, gave an enthusiastic description of how his research on pain management has been enriched by involving patients. In the same panel, Dr. Michael Strong, president of CIHR, the federal funding agency for health research, cautioned that there are still barriers to implementing these projects. Participatory science can take time, which does not always lead to the number of publications required for promotion at universities, especially during researchers’ early careers.

Scientists and policy makers must continue to address equality and diversity

Six panels focused on the work of researchers, educators, and policy makers in increasing equality, diversity, and inclusion across Canada. In 2016, there was still an average 12 per cent pay gap between female and male full-time faculty at universities and colleges across Canada, and only about a quarter of all full professors were female. However, gender disparity was not the only issue raised. In a panel focusing on northern researchers, David Silas, First Nations engagement advisor at Yukon College, spoke of his work to include First Nations’ knowledge and communities in research, while in a panel on growing Canada’s life sciences industry, Karimeh Es Sabar, CEO of Quark Venture Inc, a Canadian venture capital firm, discussed the importance of hiring personnel from all socioeconomic backgrounds, in order to find individuals with the skills to succeed in both business and research.

The increased funding for research in the most recent federal budget, the move to more transparency from government and academic researchers, and continued efforts by scientists to involve the public in their work, create the conditions necessary for government and scientists to build more connections between science, policy, and society. But for this promising trajectory to continue, scientists need to continue their work with the public, who are the real influencers of policy, while remembering policy cannot always be based solely on science.

So what place do you think science has in society, and what role should it have in policy?