Thousands of wildfires are raging across Canada’s boreal forest, forcing the evacuation of tens of thousands of residents and burning (as of 15 July 2015) more than 3 million ha, or 2.5 times the 10-year average for this time of year. According to the Canadian Forest Service, the fire weather forecast looks grim. 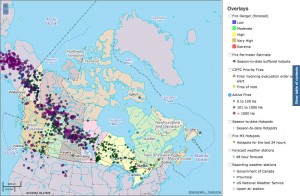 Active wildfires across Canada, from the Canadian Forest Service.

A couple of weeks ago, smoke from wildfires in Pemberton and Sechelt on BC’s Sunshine Coast covered much of Metro Vancouver and Vancouver Island. It gave British Columbians a taste of what it would be like to live in cities like Ulaanbaatar, Mongolia; Peshawar, Pakistan; or Ahwaz, Iran (the city with the world’s worst air quality), where high levels of air pollution are more frequent, if not the norm.

Canadians may wonder what’s led to the current disastrous situation, which appears set to stay for the rest of the summer. Unfortunately, the myths and misconceptions surrounding climate change – and the associated impacts, such as wildfires – abound. There are many who claim that warmer weather under climate change would actually benefit northern countries such as Canada by boosting their agricultural output and economy.

This argument is blind to the fact that climate change involves much more than just a simple increase in temperatures.

As Western Canadians have seen, higher temperatures and reduced precipitation have strongly contributed to the increase in number and extent of wildfires, and a shortage of water. Science Borealis blogger Sarah Boon has written a roundup of the dry conditions in Western and Northwestern Canada, which is very alarming considering that we’re only halfway through summer.

The effects are not restricted to land-based ecosystems, either. The Pacific Salmon Commission reports that river temperatures are 2-4Â°C above normal and are threatening salmon stocks, particularly those in the commercially valuable Fraser River (PDF).

Climate change has even more tangible effects on our day-to-day lives. Whistler, BC, issued a health advisory earlier this month due to the poor air quality caused by wildfire smoke. This is the same town that’s considered one of Canada’s top natural playgrounds, a perfect place to get away for the weekend. But wildfires and their effects are just one facet of these changes. Doctors predict that respiratory illnesses will increase with climate change, taking climate change from the abstract (changes in CO2 and global temperature) to the everyday.

Climate refugees (those forced to flee – even temporarily – because of the effects of climate change) are expected to flock to Canada, increasing from 22 million per year to more than 200 million per year by 2050. This year, more than 13,000 people were temporarily displaced by wildfires in Saskatchewan alone. But even that is a small fraction of the >100,000 people displaced by the 2013 Alberta floods. That same year, three times as many people worldwide were temporarily displaced by natural disasters than by conflict.

Another myth about climate change is that reducing the emissions responsible for it will cost jobs and have overall detrimental economic outcomes.

There is significant opportunity for job creation by investing in clean energy initiatives. Organizations such as Jobs Justice and the Climate and 350.org, which recently staged a large rally in Toronto, advocate for an economy that creates jobs by investing in green industries, reducing carbon emissions, and promoting equity. Unfortunately, the recent 2015 Canadian premiers meeting focused largely on oil sands, fracking, and pipelines. Given the current climate crisis and the promise of worse to come, it is ironic that our leaders are paving the way to more intense emissions, rather than planning to reduce emissions and transition to clean energy.

While we may think that climate change impacts are negligible, too far in the future, or have a minimal impact on human life (not even considering the impact on natural systems), the evidence shows us the error of these thoughts. We must choose to see that evidence and act upon it.

With the next UN Climate Change Conference (COP21) scheduled for Paris this December, it’s worth looking back at COP19, where the Philippines’ delegate, Yeb Sano, made this emotional plea for the world to take immediate action to reduce CO2 emissions. Unfortunately Canadian leaders don’t seem to have heard this plea, and things are likely to get worse before they get better.